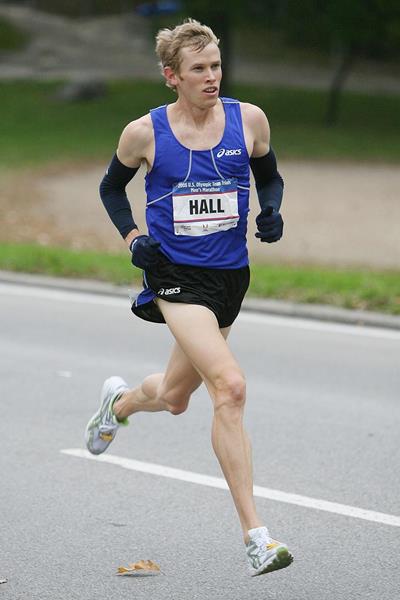 Ryan Hall, America’s fastest marathon runner, winner of the Boston Marathon with the fastest time ever by an American, is retiring due to severe chronic illness.(1)

Hall, 33, who was one of the last remaining hopes for an American front-runner in this summer’s Olympic marathon, is succumbing to chronically low testosterone levels and fatigue so extreme, he says, that he can barely log 12 easy miles a week.

I myself was a distance runner (completed two marathons) and came down with chronic fatigue. I was also a vegetarian, and I believe that both conditions contributed to a diagnosis of chronic fatigue.

I’ve written about the problems caused by distance running in two of my books: Smash Chronic Fatigue, and Muscle Up.

Hall is probably mired in an outdated and dangerous dogma of diet and exercise, and one imagines that his coaches are as well. What a shame that top coaching talent at the Olympic level couldn’t stop a great athlete from getting seriously ill.

The dogma also extends into the mainstream of health and fitness, where it’s commonly thought, by the masses if not the experts, that more exercise is always better and dietary fat is bad for you.

That is not the case. Too much exercise can ruin health, and dietary fat is necessary and important. Protein also plays a large role even in running.

Distance running is a highly catabolic exercise, that is, it breaks down muscle and other lean tissue, both because of lack of use of muscles other than those in the legs, and because high cortisol (a catabolic steroid hormone) is a feature of long stretches of exercise. As opposed to this, strength training is anabolic, building up.

The effect of distance running on testosterone levels is, if not well known, at least known, and has been termed the “exercise-hypogonadal male condition”.(2)

An increasing number of investigative research studies point to participation in endurance exercise training as having significant detrimental effects upon reproductive hormonal profiles in men. Specifically, men chronically exposed to this type of exercise training exhibit persistently reduced basal (resting-state) free and total testosterone concentrations without concurrent LH elevations. Men displaying these symptoms have been deemed to exhibit the “exercise-hypogonadal male condition”. The exact physiological mechanism inducing the reduction of testosterone in these men is currently unclear, but is postulated to be a dysfunction (or perhaps a readjustment) within the hypothalamic-pituitary-testicular regulatory axis. The potential exists for the reduced testosterone concentrations within exercise-hypogonadal men to be disruptive and detrimental to some anabolic-androgenic testosterone-dependent physiological processes. Findings on this point are limited, but do suggest spermatogenesis problems may exist in some cases.

Hypogonadism due to exercise appears to be limited to men who have had years of exposure to endurance exercise, something which applies in Ryan Hall’s case. According to the cited paper, testosterone levels in this condition typically range from 40 to 75% that of normal men the same age.(3)

Endurance-trained men have lower rates of basal testosterone production.(4) The causes are unknown at this point, and also unknown is whether this is “a permanent or transient phenomenon”.

Ryan Hall has a lousy diet with too little protein

Hall, like most distance runners these days, believes in carb-loading: eating lots of carbohydrates to fuel their exercise. A fitness site, appropriately called Pop Sugar, has the details.(5)

Hall suggests aiming for a 4:1 ratio of carbs to protein, to eat five times a day, and to avoid heavily processed or fatty foods. Fresh fruits and veggies are also a win in Hall’s book.

High-carbohydrate, low-fat diet, the perfect way to make yourself sick. He eats around 6,000 calories a day, and his favorite foods are “pasta, fish, and nut butter sandwiches”. He advises taking sports gels or bananas during a race for fuel.

The notion of carb-loading for runners has been getting a thorough rethinking these days. The body stores enough glycogen, the storage form of carbohydrate, to provide for about 24 hours of energy. In contrast, even a very lean person has enough fat to last him weeks without food.

Furthermore, glycogen is burned preferentially for the most intense activities. For lower intensity activities, the body prefers to burn fat.

Many runners have caught on to this fact, and have abandoned carb-loading. Several studies have shown equal or better performance with ketogenic as opposed to high-carb diets.(6) (See also the book by Phinney and Volek, The Art and Science of Low-Carbohydrate Performance.)

It’s perhaps understandable that Hall would want to stick with what had worked for him, but now that he has extreme chronic fatigue and can’t run anymore, he should probably rethink that.

Dietary fat, which Hall avoids, is significantly and substantially associated with testosterone levels, r=.72.(7) Maybe another reason for his low T.

Protein is another important dietary component for the athlete, and it doesn’t sound like Hall was getting enough. (He refers to peanut butter as high protein.)

The fact is, runners and other endurance athletes need more protein than bodybuilders. To prevent loss of muscle mass, elite bodybuilders required 1.12 times the amount of protein that sedentary people require, while endurance athletes needed 1.67 times more.(8) This makes sense, since running is a catabolic activity and unless enough protein is consumed, muscle will be lost. This catabolism caused by running and not enough protein may be the cause of the ultra-skinny physiques that runners have.

Hall would have had to get around 1.5 grams of protein per kilogram of his body weight to stay in nitrogen balance, that is, to not lose muscle. On his diet of pasta and peanut butter sandwiches, that hardly seems possible.

Chronic fatigue has been noted to be more common among practitioners of extreme exercise. Hall’s training regimen of running 20 miles a day certainly counts as extreme. The reason for that is largely due to the added (or multiplied) effects of the exercise and too little dietary protein.

Glutathione is the body most important and abundant internal antioxidant, and it’s made from three amino acids, glycine, glutamine, and cysteine. (Cysteine is the rate-limiting component in glutathione synthesis, which is why n-acetylcysteine increases glutathione levels.) Glutathione’s job is to mop up excess oxidants. In the course of this, it itself is oxidized, and must be recycled or re-synthesized.

In the course of long endurance exercise, glutathione is used up to quench all the free radicals, and unless enough proper nutrition is consumed, glutathione will not be replenished. Pasta and other empty carbohydrates are not proper nutrition and will do almost nothing to replenish it. High-quality protein that supplies essential amino acids is best for this.

Lack of glutathione causes dysfunction of mitochondria, often called the powerhouses of the cell, since their role is to produce energy. If mitochondria don’t work well, then energy goes down – a state of fatigue exists. Makes complete sense.

Furthermore, extreme exercise can induce leaky gut, in which extremely inflammatory lipopolysaccharides from gram negative bacteria in the intestines leak into the circulatory system, wreaking havoc with the immune system, even damaging the liver, and depleting glutathione. This causes more mitochondrial damage.(9)

Increasing evidence shows that chronic fatigue syndrome is characterized by mitochondrial damage and dysfunction as well as leaky gut.(10)

Chronic fatigue has also been noted to be a chronic catabolic condition. To reverse it, the catabolism must be stopped.

Overtraining has many similarities to chronic fatigue in terms of biochemical abnormalities. Greater amounts of dietary protein are essential for fixing it.

Hence, Hall’s extreme exercise and lack of protein and other proper nutrition caused his chronic fatigue.

When Hall competed in the 2008 U.S. Olympic marathon trials, winning it, his teammate Ryan Shay died of a heart condition during the race.(11)

Lifelong veteran endurance runners in one study had a 50% rate of myocardial fibrosis (scarring of the heart muscle), compared to zero in young athletes and in non-runners.(12) This was not associated with age, height, or weight, but was associated with number of years spent training, number of competitive marathons run, and number of ultra-endurance events run.

How to recover from chronic fatigue

I detailed my whole program for recovery from chronic fatigue in my book, Smash Chronic Fatigue. In brief, I recovered by doing the following:

Could someone recover from chronic fatigue and return to highly competitive distance running? I suspect that they could, given proper nutrition, supplementation, and rest, but that will depend on the individual.

Can Ryan Hall change? In my experience of both myself and others, one of the most difficult things to do is to admit, if only to yourself, that you’ve been wrong. (Someone so much in the public eye will be admitting it to lots of others as well.) We all have strong biases, and wanting to be right all the time is one of them; in addition, there’s confirmation bias, availability bias, and a host of others that keep us from healthy change. (Read Daniel Kahneman’s Thinking Fast and Slow for a thorough explanation of biased thinking.)

Hall and many others think that they’re doing the right things for their health, so changing requires going against the grain. I suggest he read my books and this website.