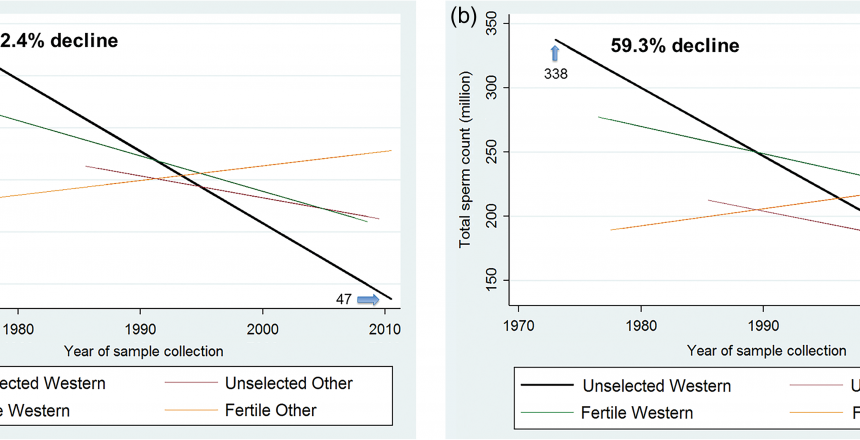 We recently discussed how industrial seed oils, better known as vegetable oils, are dangerous to health and should as much as possible be eliminated from the diet of anyone who wants to stay healthy. For men, another danger of vegetable oils is that they promote low sperm counts and infertility.

It was recently reported that, in North America, Europe, Australia and New Zealand, sperm counts have declined nearly 60% in about the last 40 years, between 1973 and 2011.

In contrast, no decline in sperm counts was seen in South America, Asia, and Africa, although far fewer studies have been performed in these regions.

The decline in sperm counts parallels the secular decline in testosterone.

To say that a 60% decline in sperm counts in the Western world is alarming is an understatement. Most European men may already be subfertile. Unless something is done about it, we could see a number of scenarios, such as (in the extreme case) extinction of Western peoples, or perhaps a return to a highly polygamous society in which fertile men take many wives and the infertile men get none, which in turn leads to a civilizational downgrade or perhaps revolution.

Why are sperm counts declining? There could be a number of reasons.

Obesity might be one reason, although scientists who have studied the secular decline in testosterone believe that obesity can’t account for (all of) it.

Estrogens in the water supply might be another: since the advent of the birth control pill, water has become full of estrogens due to their excretion from women taking them.

Another reason might be diet, which has changed greatly in the Western world over the past several decades.

One of the foodstuffs whose ingestion has massively increased is vegetable oil.

Vegetable oil contains high amounts of omega-6 fatty acids, and their use in processed food means that people who eat it, as well as those who use vegetable oils for cooking at home, ingest large amounts of it. While small amounts of omega-6 fats are required for health, the amount ingested in the Western world may be 15 to 50 times higher than needed, leading to a very unbalanced omega-6/3 ratio.

To understand why ingestion of large amounts of omega-6 fats is so unhealthy, we need to understand the phenomenon of competition among fatty acids.

Proteins, which make up much of the body’s structure, are made using a fixed, invariant ratio and sequence of amino acids. While it’s possible to get inadequate dietary protein, it isn’t possible to alter the structure of the body’s own proteins.

Polyunsaturated fatty acids, most prominently the omega-6 and omega-3 fatty acids, are also structural, and form important components of cell membranes (phospholipids), as well as cell signaling molecules such as prostaglandins and thromboxanes.

In contrast to proteins, the dietary mix (ratio) of fatty acids determines the kind of fatty acids that are incorporated into cell membranes and cell signaling molecules. Therefore a higher intake of omega-6 fatty acids results in a higher concentration of them in cells.

So, in the past several decades, omega-6 fatty acids became incorporated into the cells of Western men (and women) to a much greater extent than before.

Men who were infertile due to a low sperm count had more than double the omega-6/3 ratio in blood and in spermatozoa as men who were fertile and normal.

There was a strong negative correlation between omega-6/3 ratios in individual men and sperm count, sperm motility, and sperm morphology.

Other studies have found similar results.

A toxic byproduct of omega-6 fatty acids, 4-hydroxynonenal, increases reactive oxygen species and damages human spermatozoa. The authors of this study suggest, ” If such spermatozoa successfully fertilize the egg, then this may explain the rise in lymphoma and leukemia in children of smoking fathers.”

Infertile men were given omega-3 supplements in the form of fish oil, at ~2 grams omega-3 daily, or a placebo. Sperm count and density significantly and substantially (about 50%) increased in the omega-3 group.

The omega-6/3 ratio “is of utmost importance in male in maintaining normal sperm integrity and function.”  Many studies bear this out.

Is the decline in sperm counts in the West due to increased vegetable oil consumption?

Check out the following chart, which shows the availability of added dietary fat in the U.S.

Why has consumption increased so much? Mainly, because they told us to use it.

Who’s they? Our “health” authorities, including in the medical and scientific establishments and the U.S. government.

They told us to use a wholly unnatural, highly processed oil instead of mother nature’s butter and olive oil. Health establishment fail.

What men can do to maintain high fertility

Vegetable oils, aka industrial seed oils, are used in processed, fast, and junk food of all kinds. If you eat at a fast food joint, your fries are cooked in them. At a Mexican joint, your tortilla chips. At a fancy restaurant (or at home), your salad is doused with them.

Virtually any kind of processed or packaged food you get at a supermarket contains vegetable oil.

The first step in maintaining high fertility is to avoid vegetable oils as much as possible. If added fat is desired, use butter, lard, coconut oil, ghee, or olive oil.

As with so many other areas in health, the mainstream health advice with regard to the type of fats everyone should eat have turned out to be disastrous for male fertility.

The advice emanating from the medical and scientific establishment and the government has helped to bring on the obesity and diabetes epidemics as well. They want virtually everyone on statins, which lower testosterone.

They used to laugh about “precious bodily fluids”, but the phrase turned out to be eerily prescient.

Don’t trust anything they say.