Adequate protein is a must for weight loss 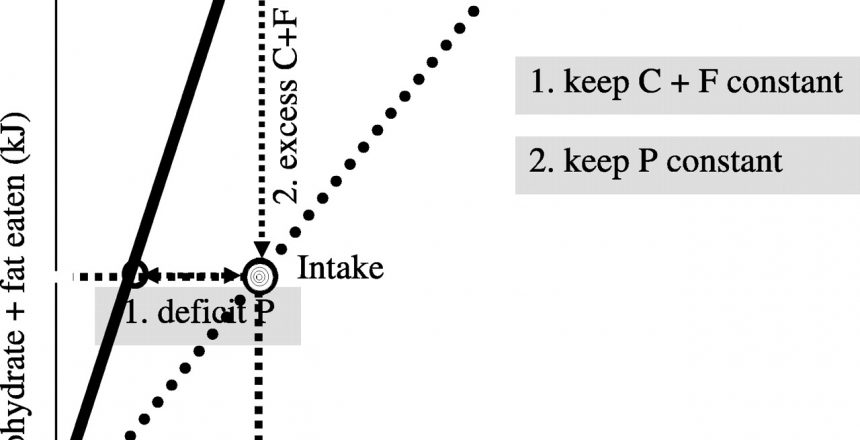 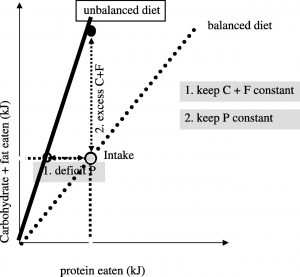 The protein leverage hypothesis of obesity asserts that humans and animals closely regulate the amount of protein in their diets, with the average human consumption of protein being around 15% of calories. The idea is that if available foods are low in protein, more food will be eaten until protein requirements are satisfied. If foods are relatively dilute in protein, containing, say, less than 15% protein overall, then more calories need to be consumed to make up for the lack of protein. If higher protein foods are eaten, then less calories are consumed and weight loss or maintenance follows.

It’s not hard to see how eating foods lower in protein could lead to becoming overweight.

Is this really true? Do humans and other animals have a sort of “proteinostat” that monitors their protein ingestion and tells them to eat more or less protein? There’s a lot of evidence that they do.

In non-human primates, for example, protein content of foods dictates daily energy consumption. This also appears to be the case with other animals, such as pigs and rodents.

A trial of the protein leverage hypothesis in humans

What we want to know is whether this effect works in humans. Simpson and Raubenheimer, the two main theorists of the protein leverage hypothesis of obesity, set out to test it in a clinical trial in humans: Testing Protein Leverage in Lean Humans: A Randomised Controlled Experimental Study.

What they did was to take 22 “lean subjects” and feed them food that disguised the protein and other macronutrient composition of their diets, and see what happened in terms of calorie consumption. When the composition of the food was only 10% protein, the subjects consumed 12.4% more calories than when protein composition was 15%. However, raising the protein content to 25% from 15% had no effect on calories consumed.

Verdict: “In our study population a change in the nutritional environment that dilutes dietary protein with carbohydrate and fat promotes overconsumption, enhancing the risk for potential weight gain.”

As the authors note in their paper, between 1961 and 2000, average protein consumption in the U.S. dropped from 14% to 12.5%, an absolute decrease of nearly 11%, and over the same time period, non-protein calorie consumption increased 14%. Absolute protein consumption remained constant, which provides epidemiological evidence for the protein leverage hypothesis.

What has driven the decreased protein intake and the increased calorie intake? Two things, in my opinion. One is the increased consumption of junk food: chips, soda, pastries, and similar things, all of which have a low protein content. The other is the infamous U.S. government dietary guidelines, which tell everyone without exception to eat a low-fat diet. Since protein is often associated with fat, such as in meat and dairy products, these guidelines led to less meat consumption, with more calories being consumed to compensate for the lack of protein in all the empty, high-carbohydrate foods that the government (and the medical establishment) wanted us to eat.

Here we see another possible reason why low-fat diets have such a dismal record in weight loss. The relative lack of protein contributes to people being hungrier, and you can only defend against hunger so long before you give in.

It appears that if one wants to lose weight, ensuring a decent level of protein consumption is important, since that means less hunger and a consequently lower calorie intake. This can be done on most low-carb diets, since they usually entail foods that are relatively high in protein. By definition, most low-fat diets are low in protein, and most people are doomed to fail on these diets.