Carbohydrates, Not Saturated Fat, Are Correlated with Cardiovascular Disease 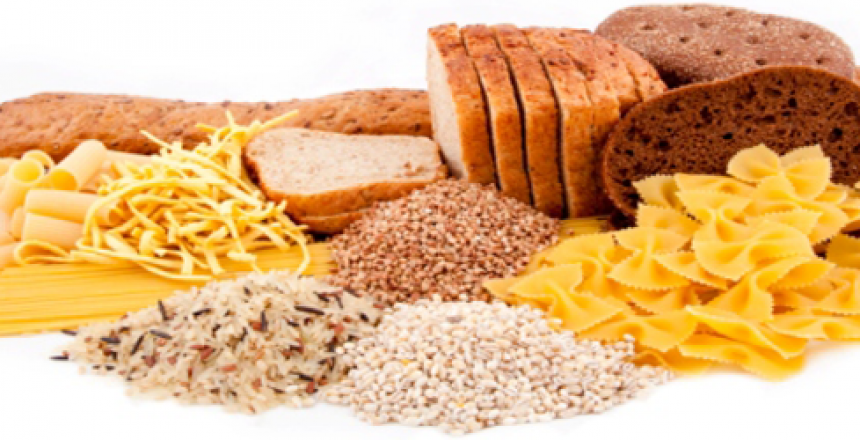 We’ve been told for many decades now to avoid saturated fat to lessen our risk of heart and other cardiovascular disease. But as with so many other pieces of mainstream health wisdom, the doctors and scientists got that one wrong, not that there was such great evidence to begin with. Instead, their recommended macronutrient, carbohydrates, not saturated fat, are correlated with cardiovascular disease. It’s time to end the lies.

You may have heard of the new documentary film “What the Health”, which blames meat for the epidemic of obesity, diabetes, and heart disease, and advocates veganism for health.

I had to leave the room after watching some of this movie because of the mendacity on display in both the interviewees’ answers and the tone of the film. In any case, seeing some of it and realizing how popular it’s become prompted this article. Most people, not knowing any better, take that stuff at face value because of doctors in the film and because it confirms their biases about meat. (Nina Teicholz wrote a solid takedown of the film’s lack of a base in actual science.)

Saturated fat does not cause heart disease

In a recent article, we saw that red meat, contrary to what you’ve heard for years, is a health food.

The main component of meat that’s been thought to be involved in cardiovascular disease is saturated fat.

Yet, a recent meta-analysis (an analysis of other studies) found, “Saturated fats are not associated with all cause mortality, CVD, CHD, ischemic stroke, or type 2 diabetes…”

The study did find an association of a particular type of fat with all-cause mortality as well as coronary heart disease, and that was trans fat, the type found in hydrogenated vegetable oils used in processed foods.

Another study from a few years ago, one of whose authors was Ronald Krauss, a very big name in this field, concluded, “… there is no significant evidence for concluding that dietary saturated fat is associated with an increased risk of CHD or CVD.”

The doctors in “What the Health” must be aware of these studies; if so, they’re being willfully misleading, and if not, are willfully ignorant.

It beggars the imagination that a food that humans have eaten for millions of years, sometimes to the exclusion of anything else, suddenly causes heart disease and obesity. The consumption of red meat has actually declined since before the obesity epidemic (although poultry consumption has increased), and the consumption of grains has increased. See the following chart (source). 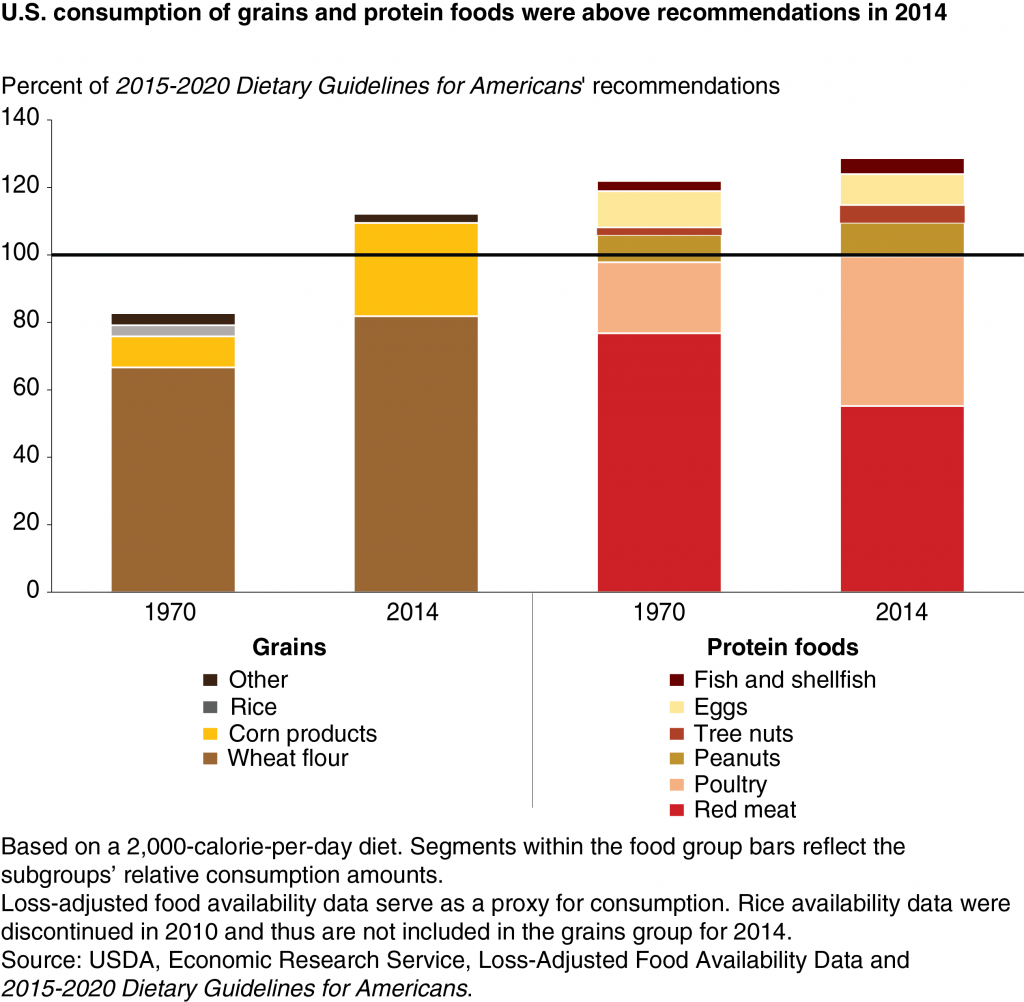 If saturated fat isn’t linked to the incidence of cardiovascular disease, the biggest killer in the developed world, what is?

A study that was published last year, Food consumption and the actual statistics of cardiovascular diseases: an epidemiological comparison of 42 European countries, found that “The most significant dietary correlate of low CVD risk was high total fat and animal protein consumption.”

Yes, you read that right. The more fat and the more animal protein people ate, on a population basis, the less cardiovascular disease they had.

The study also found that “The major correlate of high CVD risk was the proportion of energy from carbohydrates and alcohol, or from potato and cereal carbohydrates.” [My emphasis.]

The following chart illustrates the correlation between the amount of carbohydrates (and alcohol) in the diet, by country, and the total CVD mortality in women. 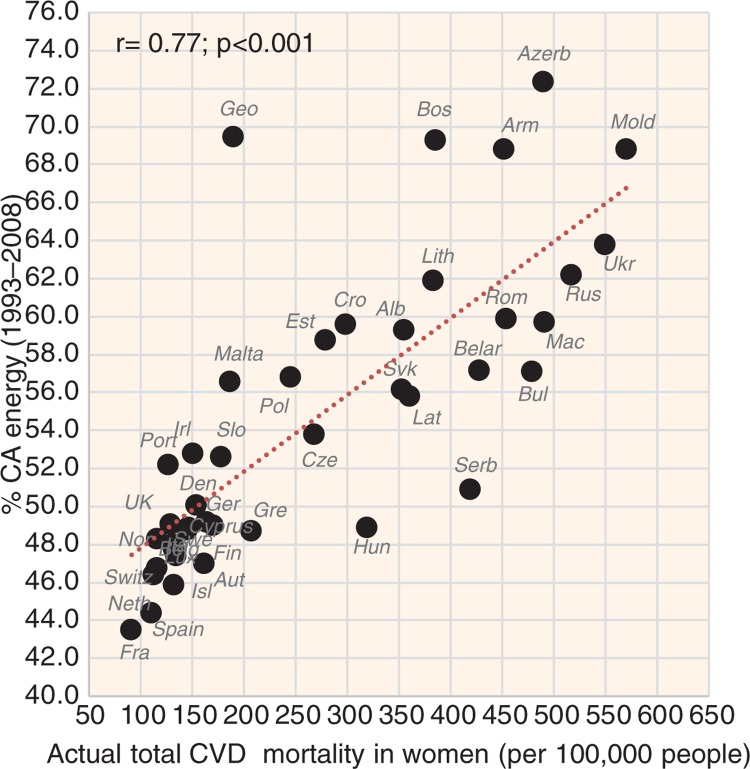 The study found that animal fat did indeed raise cholesterol levels, but that “the relationship between raised cholesterol and CVD indicators in the present study is always negative.” The higher the cholesterol, the lower the CVD rates.

The major correlates of high CVD risk were:

The major correlates of low CVD risk were:

As always, correlation does not equal causation. Other important factors relating to CVD deaths that this study found were smoking, BMI, and level of healthcare expenditure.

But these associations appear to exonerate saturated fat from animal sources, such as meat and dairy, from causing heart disease and stroke. And they imply that carbohydrates are a problem.

The above-cited study states, “The obvious fallacy of the ‘saturated fat hypothesis’ can be demonstrated by the example of France – a country with the highest intake of animal fat in the world and the second lowest CVD mortality (after Japan).”

Ergo, saturated fat does not cause cardiovascular disease, despite what the makers of “What the Health” would have you believe. The film is just more deliberate deception from the mainstream.

Our results do not support the association between CVDs and saturated fat, which is still contained in official dietary guidelines. Instead, they agree with data accumulated from recent studies that link CVD risk with the high glycaemic index/load of carbohydrate-based diets. In the absence of any scientific evidence connecting saturated fat with CVDs, these findings show that current dietary recommendations regarding CVDs should be seriously reconsidered.

Why would carbohydrate consumption be associated with CVD? Likely because they can lead to insulin resistance, which is probably the true cause of heart disease, as well as a major risk factor for cancer.

So eat meat in the knowledge that can improve your health, not decrease it, and cut back on the consumption of refined carbohydrates.

Update: Since this article was written, another, larger study has been published: the PURE (Prospective Urban Rural Epidemiology) Study, which looked at more than 135,000 people in 18 countries. The PURE Study found the same results as seen above:

High carbohydrate intake was associated with higher risk of total mortality, whereas total fat and individual types of fat were related to lower total mortality. Total fat and types of fat were not associated with cardiovascular disease, myocardial infarction, or cardiovascular disease mortality, whereas saturated fat had an inverse association with stroke. Global dietary guidelines should be reconsidered in light of these findings.

Carbohydrates, not saturated fat, are correlated with cardiovascular disease.

PS: For more on how to live a longer life through, among other things, fewer refined carbohydrates, see my book, Stop the Clock.