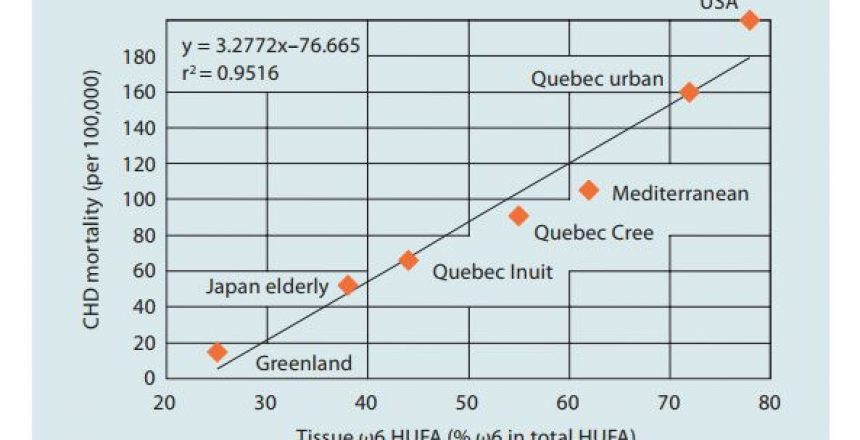 In several recent articles, we’ve seen that vegetable oils, better known as industrial seed oils, are implicated in a number of diseases, including heart disease. In this article, we’ll take a closer look at the relation between vegetable oils and heart disease.

The levels of omega-3 fatty acids, the kind most abundant in fish and fish oil, strongly and negatively correlate to heart disease rates, both on a population basis, and in individuals.

Since omega-6 fatty acids, in which seed oils are abundant, and omega-3 fatty acids compete for absorption into body tissues, it follows that a higher level of omega-6 in tissues correlates to higher heart disease rates, and indeed they do. See chart below. (Source.) 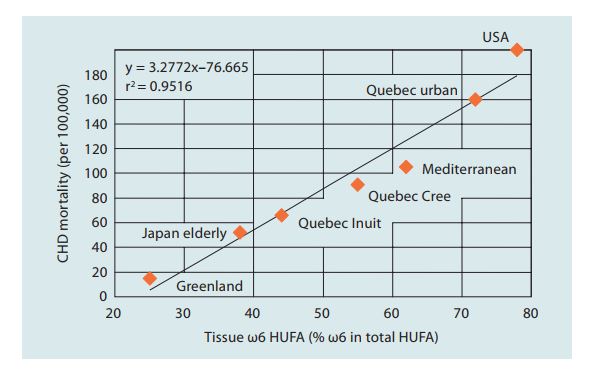 Associations are one thing, but can’t show causation. Maybe the association between omega-6 fats in the body and coronary heart disease is just a coincidence. To show causation, you need stronger evidence.

The American Heart Association wants us to consume more vegetable oils in place of saturated fat to reduce the incidence of heart disease. Surely they have some evidence.

A reanalysis of the Sydney Diet Heart Study found an increased death rate in the intervention group, who

received instructions to increase their PUFA [polyunsaturated fatty acid] intake to about 15% of food energy, and to reduce their intake of SFA [saturated fatty acid] and dietary cholesterol to less than 10% of food energy and 300 mg per day, respectively. To achieve these targets, intervention participants were provided with liquid safflower oil and safflower oil polyunsaturated margarine (“Miracle” brand, Marrickville Margarine). Liquid safflower oil was substituted for animal fats, common margarines and shortenings in cooking oils, salad dressings, baked goods, and other products, and was also taken as a supplement. Safflower oil polyunsaturated margarine was used in place of butter and common margarines. Safflower oil is a concentrated source of n-6 LA (table 1) and contains no other reported PUFAs. Therefore, the intervention oil selectively increased n-6 LA without a concurrent increase in n-3 PUFAs; this LA selective PUFA intervention will be referred to as the LA intervention.

Hard to imagine such a high intake of an unnatural food for humans as safflower oil at 15% of calories could help things, and it didn’t.

The intervention group had higher death rates from all causes, cardiovascular disease, and coronary heart disease. All-cause death risk was 1.62 times higher in the polyunsaturated group compared to controls, and results were similar for CVD and CHD. The charts below, from the article, show cumulative death rates in the intervention group that consumed more safflower oil, versus the control group that didn’t.

Similar results were found in a reanalysis of the Minnesota Coronary Experiment, which used corn oil, and in which the intervention group  had “a 22% higher risk of death for each 30 mg/dL (0.78 mmol/L) reduction in serum cholesterol.”

How to decrease consumption of omega-6 fats

However, lots of foods are either made with seed oils or are naturally high in omega-6 fats.

In a study of different foods and the balance between omega-6 and omega-3 fats, the ten food items with the most negative Omega 3-6 score were:

That’s basically a list of common junk food items. If you do nothing else but avoid those, you’d be avoiding huge sources of excess omega-6 fats.

Eat whole, unprocessed food – but you knew that already.