Staying lean is an anti-aging prerequisite

Every now and then a news report comes around about some study or other that finds that being slightly overweight is associated with lower mortality than being of normal weight. These studies are, however, fundamentally flawed, and the fact is that excess body fat accelerates aging.

Before we get to why this is, and why staying lean is a prerequisite and a must for anyone who wants to slow aging, let’s take a look again at calorie restriction, the most robust treatment for increasing lifespan in laboratory animals.

Calorie restriction (CR) is one of the few things that reliably increases lifespan. But a couple of things I’ve learned recently have had me questioning its mechanism of action. Specifically, is it fewer calories or a lower body weight that makes the difference in lifespan? That may sound like six of one, half a dozen of the other, but the difference is real.

Consider that wild mice raised in cages do not benefit from CR. (Aging Cell.) (They do however show some hormonal changes typical of lab mice, mainly increased corticosterone and decreased testosterone.) Lab mice appear to have been bred to eat more than wild mice. (Aging Cell.) So, does CR increase lifespan by decreasing body weight, in other words, by returning mice more to their original state of nature?

CR also has little effect on laboratory rats that have been bred to be lean. (Journal of Nutrition, Health, and Aging.)

Caveats abound here, and we can’t draw any dogmatic conclusions. As a counterpoint to the above, we know that intermittent fasting has dramatic health benefits for lab animals, even when they weigh the same as ad lib fed animals. The authors of the above study on lab-bred animals also state that “the retarded aging observed with CR is not due to eliminating the detrimental effects of overeating.”

Are humans like this, that is, are we all eating in the equivalent of a garbage dump? Besides the matter of the quality of food available in a dump – presumably bad – there’s the issue of abundance and ever-present availability. So even if we eat right, yet have constant access to food, and thus attain a body weight higher than that of humans in a state of nature, whatever that might be, we may be the equivalent of those baboons.

We humans, nearly all of us, may be like domesticated animals, eating more than is good for us and accelerating our aging because of this. The solution would be to arrange our habits to be more like “wild” humans, again, whatever that might be remains to be determined.

To sum up so far: being lean may be as or more important to healthy aging than the quantity or quality of the food we eat.

Obesity  is the pro-aging phenotype, with increasing levels of inflammation and oxidative stress, which conduces to cancer, heart disease, and cognitive decline.

It turns out that any level of fat mass above a certain minimum increases biomarkers of aging. The threshold of fat that accelerates aging is quite low.

Just to be clear here and to answer a common objection, when Body Mass Index (BMI) is said to be associated with increased mortality, it is fat mass, not muscle mass, that does the accelerating. This can be seen by looking at waist circumference and the waist-hip ratio, which have much better predictive power than BMI, and which measure fat mass, not muscle mass. (International Journal of Obesity.) Muscle strength and mass is associated with lower mortality, and much lower rates of cancer. (American Journal of Clinical Nutrition.) “Men with low WC [waist circumference] (≤102 cm) and above-median muscle mass showed the lowest mortality risk.”

So, fat mass, not muscle mass, leading to a higher than normal BMI leads to increased mortality risks. But what’s “normal”?

What about studies showing that being slightly overweight is best for mortality risk? These studies have a number of flaws, the major one being that they measure BMI at time of death. All kinds of diseases cause weight loss, so a person can get sick, lose a bunch of weight, then die at a much lower BMI, and this gets recorded as a death at that weight. Another flaw is smoking: smokers have higher mortality and lower BMI. When maximum lifetime BMI is used, overweight and obesity show clear and high mortality risks.

But where does is the mortality curve the lowest? Being underweight is hazardous, as is being overweight, so where’s the sweet spot?

Abundant evidence puts the lowest part of the mortality curve at a BMI of 20 to 21. (Aging Cell.)

Excess body weight and adiposity cause insulin resistance, inflammation, and numerous other alterations in metabolic and hormonal factors that promote atherosclerosis, tumorigenesis, neurodegeneration, and aging. Studies in both animals and humans have demonstrated a beneficial role of dietary restriction and leanness in promoting health and longevity. Epidemiological studies have found strong direct associations between increasing body mass index (BMI) and risks of developing type 2 diabetes, cardiovascular disease, and several types of cancer, beginning from BMI of 20–21 kg m−2. Although a recent meta-analysis suggests that overweight individuals have significantly lower overall mortality than normal-weight individuals, these data are likely to be an artifact produced by serious methodological problems, especially confounding by smoking, reverse causation due to existing chronic disease, and nonspecific loss of lean mass and function in the frail elderly. From a clinical and public health point of view, maintaining a healthy weight through diet and physical activity should remain the cornerstone in the prevention of chronic diseases and the promotion of healthy aging.

Myself, I’m at a BMI of slightly over 24, however I lift weights and have a good deal of muscle, and furthermore and perhaps most importantly, my waist circumference is 32″ (81 cm). If I assume I have 30 pounds more muscle than most other men my age, and subtract it, my BMI would be closer to 20.

For further confirmation that a BMI of 20 to 21 is normal and optimal, and leaving aside the issue of muscle, I think you’ll find that a woman of BMI 21 is much more attractive than one of 24.9, other things being equal.

To slow aging as much as possible, BMI should be around 20 to 21, more of course if you lift weights and have extra muscle. A few of the really big guys will be in the technically overweight category while still being at a low risk of mortality.

It can also be seen that the category of “overweight”, if defined by level of health risk, begins at a much lower BMI than 25. More like it might be 22, if we’re being strict.

Being lean is a prerequisite for slowing aging. Other anti-aging measures that you might take may not make much of a difference if you don’t start with maintaining a normal body weight, which as we’ve just seen is lower than what mainstream medicine tells you.

Update: Reader “Proud Daddy” pointed out the following article: Normal weight obesity: a risk factor for cardiometabolic dysregulation and cardiovascular mortality. Those with “normal” BMI but high waist size have much greater cardiovascular risk, as shown by the following chart: 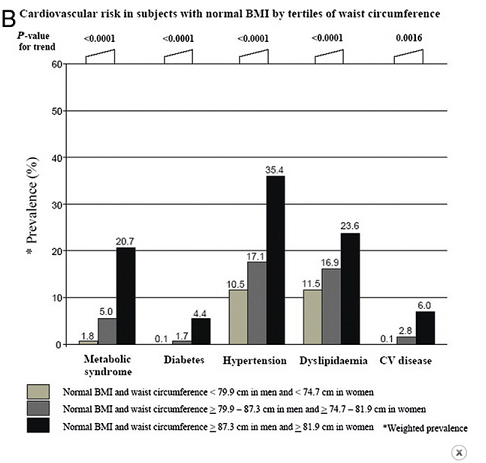 Sixty times the incidence of heart disease at the highest tertile compared to lowest.