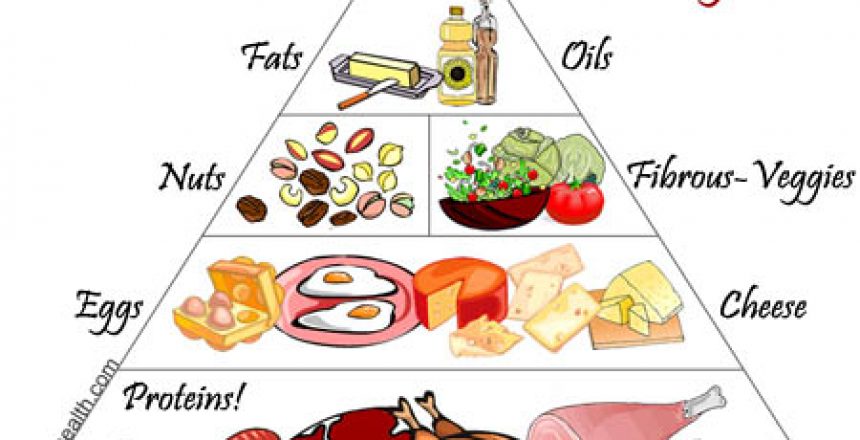 Weight loss and the myth of saturated fat

What’s the best diet for weight loss? Much controversy swirls around this question because although diets like the low-carb Atkins diet have had great success, we don’t know whether they’re more effective, and besides we’ve been told for years that too much saturated fat in the diet may be bad for our health.

The “fact” that saturated fat may cause heart disease and be bad for our health generally has finally, and I believe definitively, been shown to be a myth. A meta-analysis from a few years ago, one of whose co-authors was Dr. Ronald Krauss, than whom it would be impossible to be more mainstream, showed that “there is no significant evidence for concluding that dietary saturated fat is associated with an increased risk of CHD [coronary heart disease] or CVD [cardiovascular disease].” The myth of dietary fat and health risks has been expounded upon at length in the recent book by Nina Teicholz, The Big Fat Surprise, which I highly recommend.

As the myth of saturated fat has been debunked, we’re left with which diets are better for weight loss. One factor in that analysis is compliance, that is, to what extent dieters will stay on a diet. In compliance, there are basically two things to consider: 1) whether the food taste good; and 2) whether hunger can be kept under control.

Food doesn’t just supply us with nutrients; it’s pleasant and the occasion for social interaction, and a diet depriving people of these will generally make them unhappy and unwilling to continue.

And if dieters are hungry, they are much more likely to break their diets and revert to their old, weight-gaining ways. A major theme of my book, Top Ten Reasons We’re Fat, is that any diet with a reasonable chance of success must control hunger, since hunger always wins in the end.

Low-fat diets, the kind prescribed over the past few decades, generally deprive dieters of foods that humans find naturally satisfying and that taste good, fatty foods like steak and all kinds of meats, butter, cream, cheese, eggs, even olive oil. Many or most people find that they feel deprived on such a diet – I would anyway.

On the other hand, low-carbohydrate diets deprive dieters of or severely limit sugar, bread, rolls, pasta, tortillas, candy, pastries, and any number of other things. However, on a calorically restricted low-fat diet, you can’t really eat your fill of these foods either.

So, as far as taste goes, a low-carbohydrate diet would seem to offer a better choice, being able to eat one’s fill of “main meal” type, satisfying foods, while limiting anything made with flour or sugar. Low-fat diets, if calorically restricted, limit these foods anyway.

What about hunger? Most people report less hunger on a low-carbohydrate diet, so they’re more likely to stay on it. But the kicker is that most low-carbohydrate diets do not restrict calories, while low-fat or conventional diets do. So even if low-carbohydrate, high-fat foods didn’t satisfy hunger more, the fact that one can just eat more of them would seem to make up for it. But all the evidence points to low-carb, high-fat foods as better able to eliminate hunger – in fact, that’s part of the mechanism that makes them work.

A head-to-head comparison of low-carbohydrate, low-fat, and Mediterranean diets

A study from a few years ago directly compared three different diets for weight loss: Weight Loss with a Low-Carbohydrate, Mediterranean, or Low-Fat Diet. (New England Journal of Medicine.)

The low-fat diet was calorically restricted, with a target 1800 calories a day for men, 1500 for women. (Editorial comment: I’d be hungry on that amount of calories.) It was 30% of calories from fat, and “participants were counseled to consume low-fat grains, vegetables, fruits, and legumes and to limit their consumption of additional fats, sweets, and high-fat snacks”. (Editorial comment: even on this diet, sweets are limited.)

The Mediterranean diet’s target calorie intake was the same as for the low-fat, but with a goal of 35% calories from fat, “the main sources of added fat were 30 to 45 g of olive oil and a handful of nuts (five to seven nuts, that’s it).

The low-carbohydrate diet was not restricted in calories; it was all you can eat. (Now we’re talking.) It provided “20 g of carbohydrates per day for the 2-month induction phase…, with a gradual increase to a maximum of 120 g per day to maintain the weight loss. The intakes of total calories, protein, and fat were not limited. However, the participants were counseled to choose vegetarian sources of fat and protein and to avoid trans fat. The diet was based on the Atkins diet.” Unfortunately, we see the fear of saturated fat loom here, with “vegetarian sources of fat and protein”. At the beginning, the diet amounts to a ketogenic diet; it’s unclear why they felt the need to increase carbohydrates from the original to 120 grams. Possibly they think better compliance would result.

The study lasted for 2 years; all participants were either overweight (BMI ≥27), or with diabetes or coronary heart disease.

So, what happened? Drum roll, please… 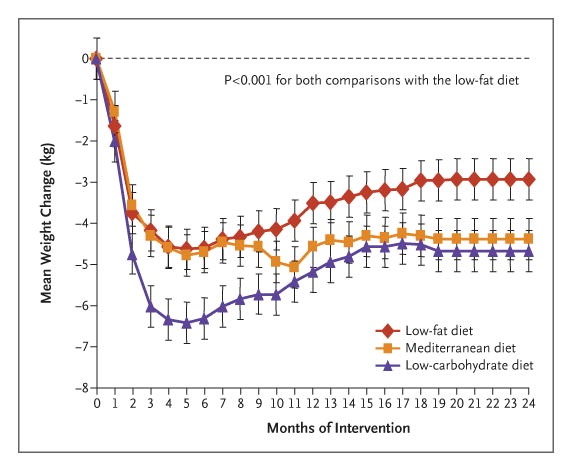 Weight loss on low-carbohydrate, low-fat, and Mediterranean diets. Low-carb for the win.

Note from the above graph that with all diets, most weight loss occurred in the first 6 months, with either a plateau (Mediterranean) or a gradual weight regain. This pattern is often seen in diet studies and, no doubt, in real-world dieters.

The reasons for that are at least two or three. One is that dieters lose their initial enthusiasm and start to cheat. Another is a decrease in metabolism that follows weight loss; although this occurs with all weight loss, the low-carbohydrate diet appears to have a better record of maintaining metabolism, one reason being that it’s not calorically restricted. Finally, the low-carb diet had “cheating” built into it, with a beginning carbohydrate allocation of 20 grams a day, but rising to 120 grams a day later. That alone could easily account for weight regain.

The researchers wanted to know how each of these diets affected heart disease risk, and thus looked at lipid profiles. Results below. 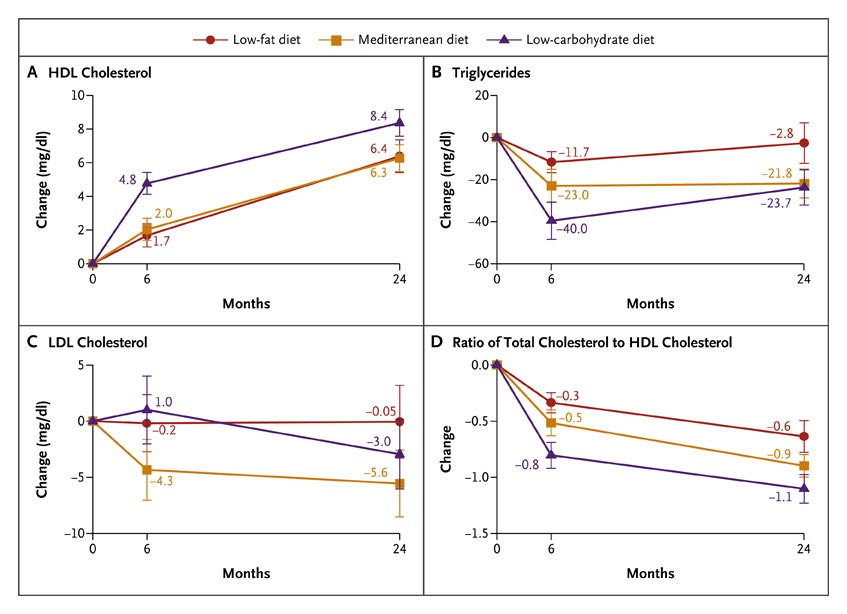 The low-carbohydrate diet had the best lipid profile results.

We know that in lipid profiles, triglycerides (lower is better), HDL cholesterol (higher is better), and the ratio between the two have the most significance for heart disease risk. The low-carbohydrate diet trounced the others in this category.

Fasting glucose (chart not shown) remained about the same for all groups, although in diabetics, the Mediterranean diet group showed the greatest improvement.

Also in non-diabetics, the low-carbohydrate group showed the greatest decrease in fasting insulin levels. Since insulin is a pro-growth, anabolic hormone, and is implicated in aging, this gives further backing to the fact that a low-carbohydrate diet is an anti-aging diet. Of great interest, the level of C-reactive protein, which is a measure of inflammation, dropped the most on the low-carb diet. Again, since increasing inflammation is associated with aging, the low-carb diet can potentially slow the aging process.

The results show that the low-carbohydrate diet was the clear winner for weight loss. (Diabetics had somewhat better results with the Mediterranean diet, although not for weight loss.)

The better results on low-carb were likely due to two things, in my opinion. One is that insulin levels dropped. Insulin helps drive fat into cells, and lower insulin levels allow fat cells to release fat to be burned. The other reason is probably better compliance. This low-carbohydrate diet was unrestricted in calories, i.e. all-you-can-eat, therefore the participants on this diet were unlikely to get hungry and grab the nearest food available. The participants on the other, calorically restricted diets may have been much more likely to get hungry and cheat.

If weight loss is your goal, the choice seems clear enough. The addition of weight training and adequate protein intake to a low-carb diet will make the retention and even gaining of muscle possible, even while losing fat. (Annals of Nutrition and Metabolism.)

If you have any questions, please let me know in the comments.