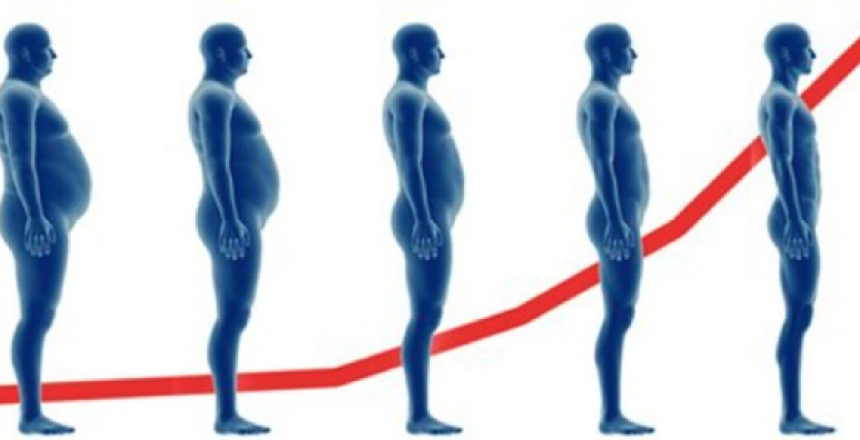 The best thing you can do to get and keep a trim body is to pay attention to your body composition, the proportion of muscle and fat your body has. Unfortunately, hardly anyone knows or does this. This article will show the scientific truth behind muscle, fat, and weight loss.

The most common way that people try to lose weight is through eating less, in other words, a low-calorie diet. This approach has a number of problems:

Eating less, often combined with “moving more” (more exercise), is an all-around lousy way to lose weight and has repeatedly been shown to be ineffective in the long run.

Recently we discussed the group of people who lost tremendous amounts of weight via eating less and moving more on the TV show The Biggest Losers. The dirty secret of this show is that most of the people who lose weight regain it, and often end up weighing even more than when they started.

The main theory as to why these people regain their weight and then some is that they have permanently damaged their metabolism by consuming less food. Let’s call it, appropriately, the permanent metabolic damage theory. They then get in a situation where it’s virtually impossible to eat less than they burn, and gain weight no matter how hard they try.

There’s no such thing as permanent metabolic damage.

My theory is that the Biggest Losers and others who lose weight by eating less and moving more have lost lots of muscle along with the fat. In fact, unless you lose weight the right way, muscle loss is inevitable and comprises between one fourth and one third of all weight lost. That’s a disaster.

Losing muscle is a disaster not just for health, but for maintaining a normal body weight. Muscle is the most metabolically active tissue. Loss of muscle translates into a lower metabolic rate.

This is precisely what happened to the Biggest Losers when they regained weight. (Also, trying to use a low-fat, high-carbohydrate diet for weight loss and maintenance is a contributory factor.)

No such thing as permanent metabolic damage

A new review of the literature on weight loss, regain, and metabolism shows that “body composition [relative amounts of muscle and fat] is the most critical factor in determining absolute RMR [resting metabolic rate] in neutral energy balance.”

Furthermore, ” the theory of permanent, diet-induced metabolic slowing in non-obese individuals is not supported by the current literature.”

In simpler terms, the more muscle you have, the higher your metabolic rate — the rate at which your body burns calories for energy.

Permanent, diet-induced metabolic damage, or a permanently lower metabolic rate due to weight loss, does not exist.

Obesity is said to be a characteristic of aging, and empirically, it is. But is it an inevitable aspect of aging. No, it is not.

One reason for increasing obesity with age is said to be muscle loss, which almost always occurs when people get older.

Why do we lose muscle with age? One reason is anabolic resistance. When someone is anabolically resistant, muscle does not respond as well to either resistance exercise or protein.

Anabolic resistance is not an inevitable consequence of getting old. It is closely connected to insulin resistance.

So to retain youthful levels of muscle anabolism, get insulin sensitive. Do this by avoiding refined carbohydrates and sugar, and eating a paleo diet. Add weight lifting into the mix.

That will keep your metabolism in good running order, and you’ll feel better and will be much less likely to gain body fat.

There’s no such thing as permanent metabolic damage. There’s only muscle loss.

Anabolic resistance as a phenomenon of aging is way oversold. It’s connected insulin resistance and nothing more.

PS: For how to build muscle, get my book Muscle Up.