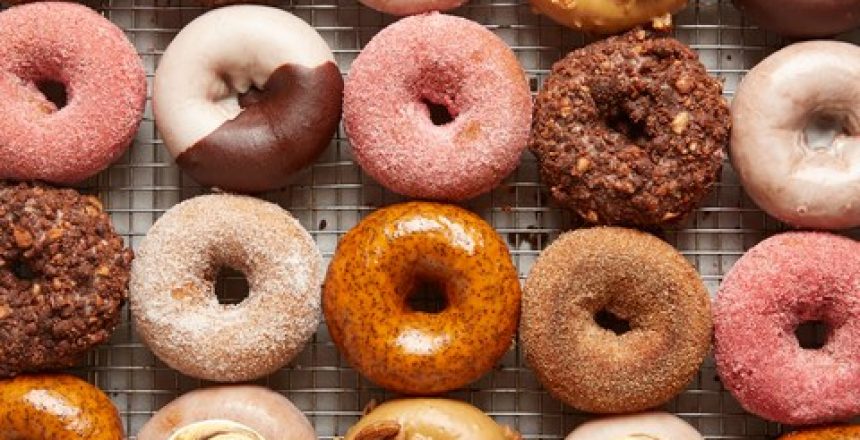 Are processed food and obesity linked? There are many reasons to think so, but some may be more subtle than we think.

Processed food: what it is

First of all, processed food must be distinguished from unprocessed, or “normal” food. The scientific literature normally designates what we normally call processed food as “ultra-processed”, since almost all foods must be processed in some way, whether by cutting, cooking, preserving, or packaging.

Ultra-processing is “a type of process that has become increasingly dominant, at first in high‐income countries, and now in middle‐income countries, creates attractive, hyper‐palatable, cheap, ready‐to‐consume food products that are characteristically energy‐dense, fatty, sugary or salty and generally obesogenic.”

Another paper defines it as “nutrient-deficient foods in the form of refined white flour, added sugars, vegetable oils, and artificially created trans fats.”

Processed food and the rise of obesity 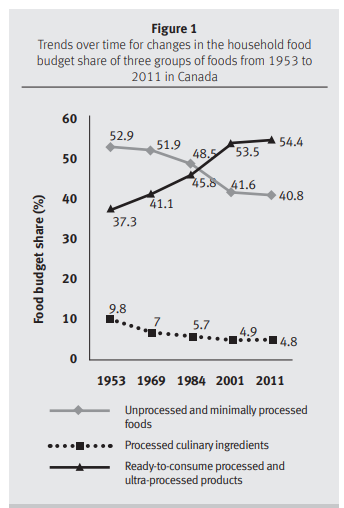 There’s no doubt that sugar, refined carbohydrates (at least in excess), and vegetable oils are bad for health and weight control but there may be other and more important reasons for why processed food causes obesity.

The inspiration for this article came from the following chart, posted by Stephan Guyenet on Twitter. It shows Americans’ consumption of carbohydrates, protein, and fat from 1909 to 2009, using USDA data. 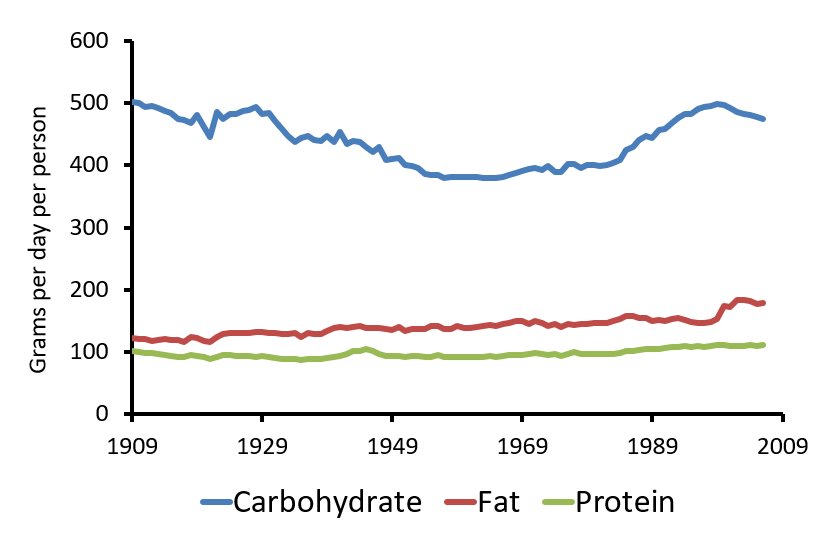 As can be seen, Americans ate as much carbohydrate in 1909 as they do today, yet there was no obesity epidemic then. Most low-carb advocates (including me) point the finger at carbs for causing obesity. Can that be reconciled with this graph?

The recipe for fry bread contains flour, baking soda, salt, and vegetable oil. In the old days, they would have used lard in place of vegetable oil. Fry cakes are the same, but with sugar added, basically unleavened, plain donuts.

Note, I’m not saying these won’t make you fat. They will. Not saying that they’re healthy, because they’re not. But lots of people used to eat this ultra-processed food, and there wasn’t an obesity epidemic. 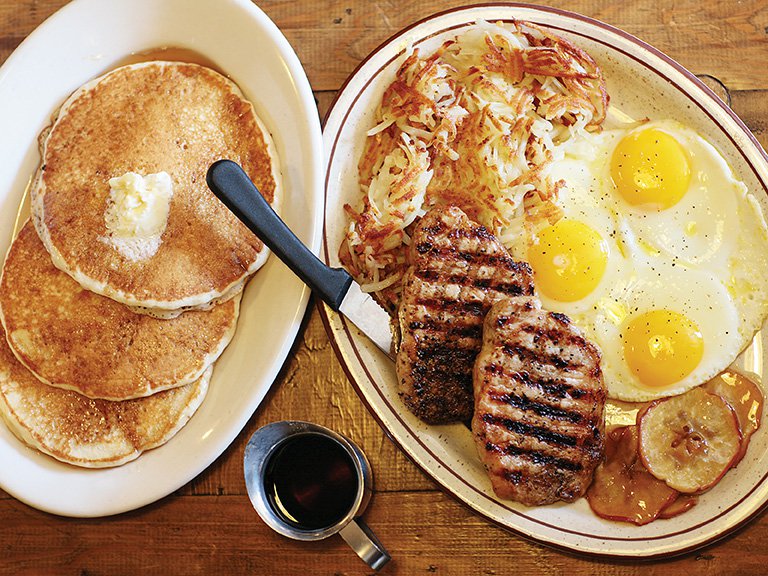 Who knows how much or often actual ranch hands ate this, but there weren’t too many fat ranch hands.

Ranch hands worked out on the range all day, factory and construction workers hauled around heavy stuff all day, housewives didn’t have labor-saving devices, and people walked to work or to the store. No one belonged to a gym. They might have played baseball or football as exercise.

Whether we have lower physical activity than them is an open question. One study found that modern Westerners expend the same amount of energy as hunter-gatherers. I’ve cited that study before, but I have my doubts.

However, even on Wall Street, where they sat in offices, they weren’t fat. 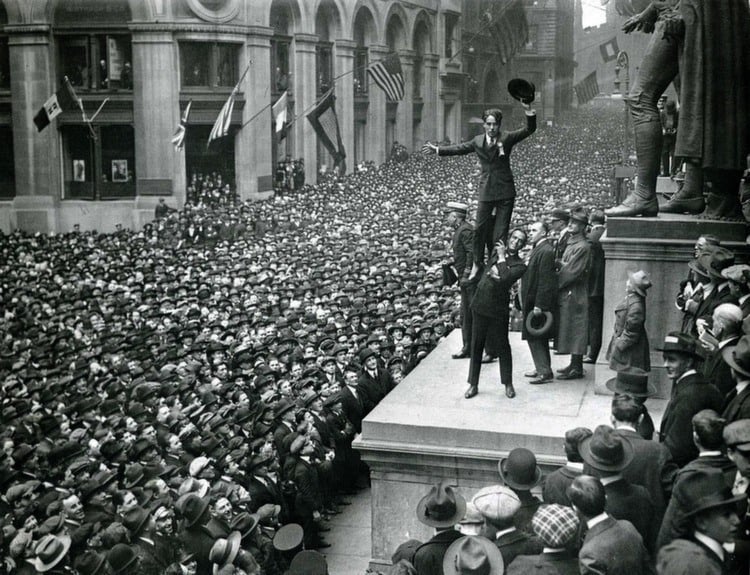 Cost and frequency of processed food

Here we come to the crux of the matter (as far as this article is concerned).

The cost of food has gone way down. People used to spend a significantly higher fraction of their income on food. Restaurants were an infrequent luxury. The following graph shows food expenses starting in 1960. 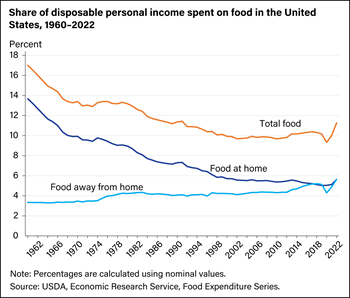 Poorer countries – and the U.S. used to be much poorer than today – spend a much greater fraction of their incomes on food. 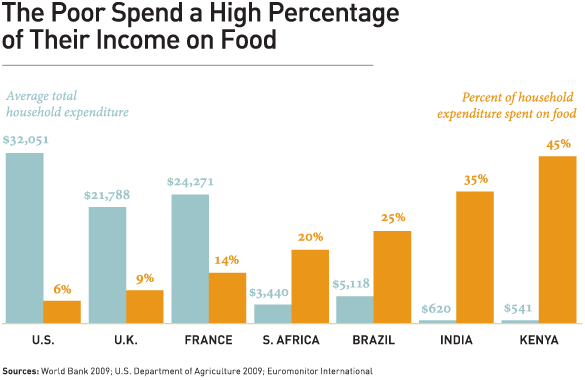 We now have constant, 24/7 food availability, one reason being because it’s cheap and convenient. The idea that you can go more than a few hours without eating is foreign to most Americans. They refer to fasting as “starvation”.  They actually believe that “grazing”, which basically means eating all the time, is healthy.

Foods that are made of sugar, flour, and vegetable oil also don’t repress hunger as much as high-protein, whole foods, so people get hungrier more often and can’t resist eating. Processed foods may also override hunger; they’re a supernormal stimulus.

I don’t think I’ll be ending the obesity epidemic any time soon, but I could possibly offer some advice to the individual who wants to lose fat or maintain leanness.

1: Avoid processed food. This rule comes with a caveat: if you’re lean, and you expend as much energy as a ranch hand, and you only eat 3 meals a day with no snacks, you might be able to get away with eating processed food. It’s still not healthy, but if you satisfy those conditions, maybe it won’t make you fat.

2: Don’t eat all the time. The time between dinner and breakfast, perhaps 12 hours, was made for digesting and sleeping, not more eating. If you want to lose weight and/or get healthier, go longer without food by doing intermittent fasting.

3: Eat, whole unprocessed foods. If it comes in a box or bag, don’t eat it.

4: Don’t go near fast-food restaurants, or almost any other restaurant for that matter.

I still believe that cutting carbohydrates and eating whole, unprocessed food is the best way to a lean physique for most people, but the considerations outlined above show that the causes of obesity may be more complicated than simply eating too many carbs.

PS: If you want to lose fat or stay lean and retain muscle, strength training is a must: Muscle Up.