How to Sustain Fat Loss

An article in the NY Times tells the story of contestants on the television show The Biggest Loser, in which obese people go through hard-core exercise and dieting to lose weight. The one who loses the most weight is the winner.

Unfortunately, almost all of the contestants regain the weight they lost, and some of them are heavier than when they started.

As a result, they struggle with hunger in order to at least try to prevent more weight gain.

What they did wrong

Losing weight through a low-calorie diet and aerobic exercise is not a sustainable way to lose weight.

A low-calorie diet, one that’s implemented by counting calories, can leave you hungry all the time, with the temptation to binge when the urges get out of control.

The popular habit of “burning” calories through aerobic exercise is also an exercise in futility. Aerobic exercise just doesn’t burn that many calories. You might burn 400 calories in a full hour on a StairMaster, and one sugary Starbucks drink as a treat afterwards fully negates that loss.

Once the biggest losers lost their weight after their intense boot-camp-like efforts, any let-up in the effort results in regain of weight. Boot camps are almost by definition not sustainable, so this is a terrible way to lose weight.

Probably the main reason that the contestants’ metabolic rates are so much lower now is that they lost muscle, which burns calories at rest at a much higher rate than fat.

If weight loss isn’t done properly, a substantial portion of the lost weight is muscle.

A group of people that were placed on a low-calorie diet and aerobic exercise – walking, cycling, or stair-climbing – lost 18 kg (40 lbs) in 12 weeks. Unfortunately, of that weight, almost 25% (4 kg or 9 lbs) of that loss was muscle.

That means that their metabolic rates are going to be much lower after the weight loss, and they’ll have great difficulty keeping the weight off.

In the same study, a group that ate a low-calorie diet but did strength training lost 14.4 kg (32 lbs), and all of the lost weight was fat. None of it was muscle.

The strength training group will have a normal metabolic rate. They’ll also have better insulin sensitivity, better health all around, and feel and look better too.

The NY Times article gives little information on what the subjects eat. Given the emphasis on keeping calories low and burning them off through aerobic exercise, and given the fat-phobia of doctors and the public, it’s a reasonable guess that the participants were eating a standard American diet, which is about 50% of calories as carbohydrates.

A study that compared a low-fat diet – which is necessarily a high-carbohydrate diet – with a low-carbohydrate, high-fat diet, found that the subjects on the low-fat diet burned approximately 350 fewer calories a day than those on the low-carb diet.

That’s a lot, and if calories ingested were the same in both groups, would result in a weight gain of one pound (.4 kg) every 10 days.

To lose weight permanently, you have to do the opposite of what everyone else is doing.

For starters, low-carbohydrate, high-fat (LCHF) diets are the best way to lose weight and to keep it off. Probably the most important way they work is to keep those eating this way from being hungry all the time. Therefore there’s no temptation to binge.

But as we also see above, LCHF also means a higher metabolic rate, so more energy is burned 24 hours a day.

What does a LCHF diet look like? For guidance, check out Dr. Ted Naiman’s Burn Fat Not Sugar. In essence, the diet eliminates grains, sugars, starches, and vegetable oils (but olive oil is fine), and emphasizes meat, dairy, vegetables, fruits and nuts. Here’s Dr. Naiman’s infographic on what to eat: 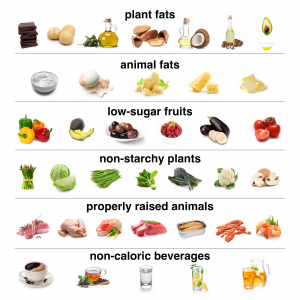 The second aspect of sustainable weight loss is to build muscle, and nothing works for this as well as weightlifting, either with free weights or machines.

With weightlifting incorporated into a diet and fitness regime, no muscle will be lost during weight loss. In fact, you can even lose fat and gain muscle at the same time. One group of subjects who used extra protein along with their diet and weightlifting routine, lost 7 kg of fat and gained 4 kg of muscle in 12 weeks.

I wrote much more on how weightlifting helps fat loss and muscle gain, besides being a uniquely healthy exercise, in my book Muscle Up.

Be the biggest winner and sustain fat loss

To lose weight in a sustainable manner, forget The Biggest Loser and everything it promotes and stands for.

Quit eating the garbage that most people eat.

Quit doing the exercises in futility that the mainstream advises.

Instead, eat low-carbohydrate, and lift weights. Our guest writer Joe O’Brien used these two methods to lose 100 pounds of fat, to gain muscle, and to sustain his fat loss and muscle gain.

If you’re gung ho about fat loss, another healthy practice that you can add to low-carb and weightlifting is intermittent fasting, the world’s easiest diet plan.

PS: Besides Muscle Up, my book on the uniquely healthful exercise that is strength training, see my latest book, Dumping Iron.

PPS: Check out my Supplements Buying Guide for Men

PPPS: I missed adding the link to the study showing greater energy expenditure on a low-carbohydrate, high fat diet. Effects of Dietary Composition on Energy Expenditure During Weight-Loss Maintenance