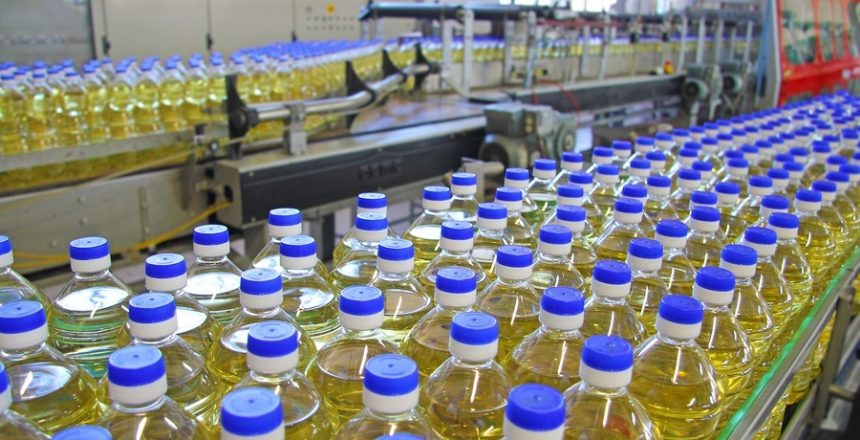 Researchers debate the fundamental causes of the obesity epidemic, and dietary changes are the most likely reasons. But which changes? Experts have pointed their fingers at sugar, refined carbs, excess fat, not enough protein, too little exercise, and many others. But one of the main causes may be hiding in plain sight, since there’s good evidence that vegetable oils cause obesity, alone or in combination with other nutrients.

Vegetable oils are better termed industrial seed oils, since they are not made from vegetables but from the seeds of grains via an industrial process. They are not natural foods, since the means of making them in any quantity have only been available for about the past 120 years. Consumption of seed oils has risen dramatically in recent decades. See charts below, showing annual seed oil consumption per person in kilograms. (Source.) 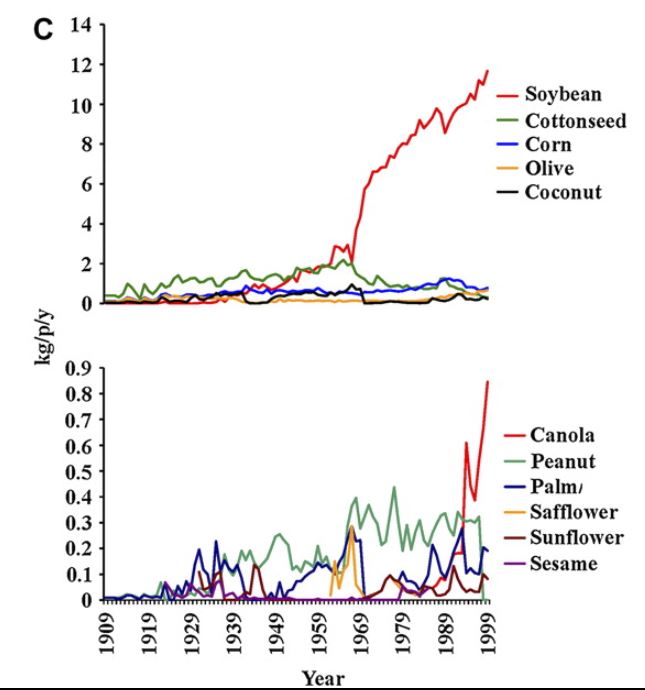 For comparison, the chart below shows other food consumption trends in recent decades. The consumption of dairy, beef, and pork are all down; grains are higher, and sugar about the same. Soy oil is way up, as is chicken, which perhaps not coincidentally also contains large amounts of the omega-6 fats that are also found in seed oils. 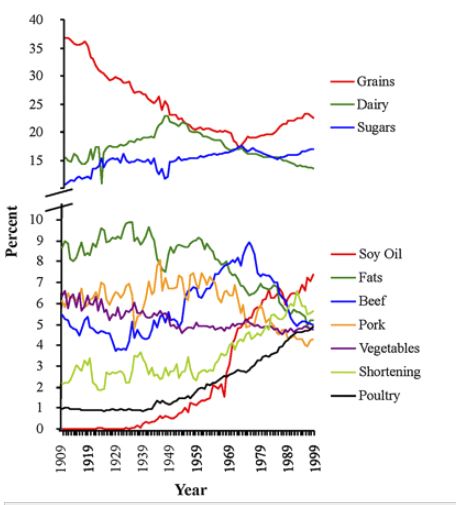 Linoleic acid is the main omega-6 fatty acid found in seed oils, and its consumption has greatly increased. 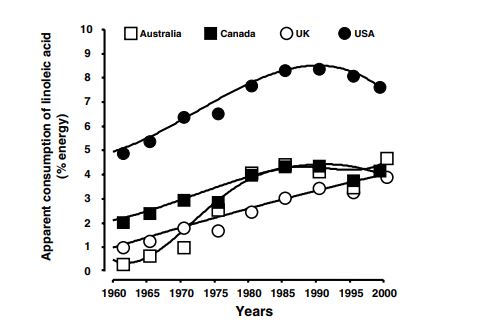 Note a couple of things about this chart. 1) The U.S. has the highest rate of obesity and also the highest linoleic acid consumption. 2) The chart only begins in 1960, so compared to earlier, say 1900, current consumption is way higher.

“The most striking modification of the US food supply during the 20th century was the >1000-fold increase in the estimated per capita consumption of soybean oil from 0.006% to 7.38% of energy.” (Source.) Other estimates put consumption as high as 20% of calories.

Suppose we set up a 3-way contest among nutrients to see which one could get mice the fattest. The nutrients are soybean oil, coconut oil, and fructose (of which 50% of table sugar is composed).

The clear winner is soybean oil: Soybean Oil Is More Obesogenic and Diabetogenic than Coconut Oil and Fructose in Mouse.

Linoleic acid, the main omega-6 fat, elevates endogenous cannabinoids and induces obesity at a concentration of 8% of calories. When the concentration is only 1%, it does not induce obesity.

Blame it on the American Heart Association

Why did the consumption of soybean oil increase so dramatically? In part because the American Heart Association advised Americans to replace saturated fat with vegetable oils. 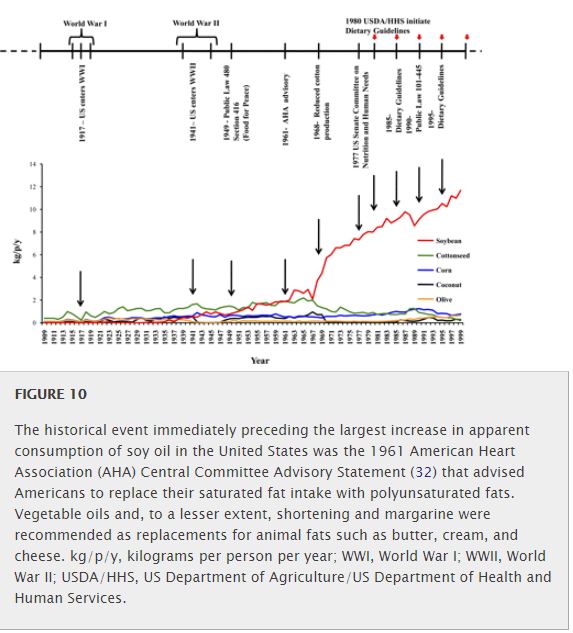 The recommendation of the AHA to replace natural foods with an industrial product that humans didn’t evolve to eat – let’s just say that it didn’t turn out well.

Vegetable oils cause obesity in animals and are likely involved in the obesity epidemic in humans.

These seed oils are ubiquitous; besides obvious sources like bottles of vegetable oil and margarine, virtually all processed food contains them. To stay healthy and lean, or to return to that state, avoid them.

Eat whole, unprocessed foods, and to cut back even more on omega-6 intake, avoid chicken and most nuts.

Avoiding seed oils to maintain leanness and health should be done in conjunction with avoidance of sugar and refined carbohydrates.

PS: Besides avoiding seed oils, a lot more on what you can do for health and long life is in my book, Stop the Clock.