An Intermittent Fasting Schedule for Weightlifters 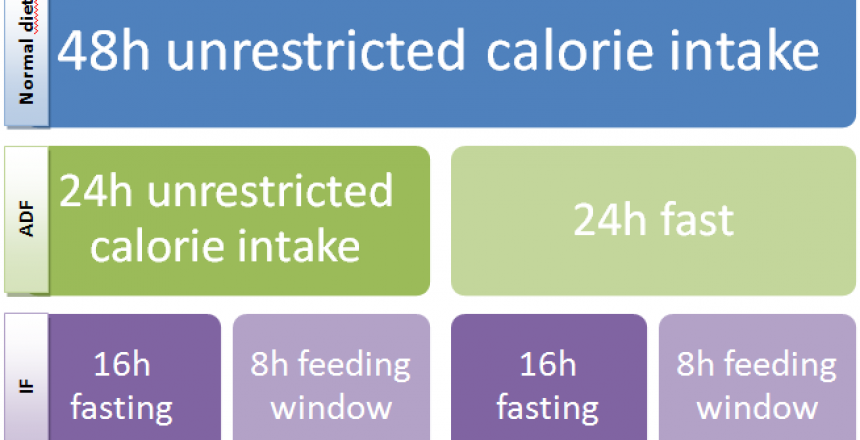 The latest paper on calorie restriction (CR) as it relates to muscle shows that CR in middle-aged rats preserves muscle mass. It does this by activating AMPK, a cellular signaling mechanism at the center of a network that controls the aging process and which is crucially involved in lifespan extension. Preserving muscle mass and counteracting aging obviously go hand in hand, since loss of muscle mass is a prime characteristic of old age. In this recent study, CR preserved muscle mass in part by increasing levels of mitochondrial biogenesis; since old mitochondria are prime sources of oxidative stress and resultant inflammation, increased mitochondria mean not only more but better, younger mitochondria that do not release high levels of reactive oxygen species. Also importantly, in the muscle of animals subjected to CR, the machinery to burn fat, as opposed to burning carbohydrates, was upregulated.

Intermittent fasting has most, if not more, of the benefits of calorie restriction. The reason for this is simple: restricted food intake, whether from timing or CR, is beneficial, yet overall CR can lead to lower bone mass and lower immune function. Intermittent fasting does not involve decreased calorie intake, so it has none of these drawbacks. Most studies on fasting show that animals or humans who fast periodically consume the same number of calories as ad lib fed, they just consume them at different times.

How often and long should you fast?

How often should one fast, and for how long, to get the benefits of increased muscle mass, metabolic resiliency, and fat-burning physiological machinery?

Of necessity, we need to speculate on these matters, hopefully from a very informed basis. Although a number of studies on humans and intermittent fasting have been done, comprehensive ones on muscle function and the like have not, and most of the work has been done on animals. One can readily see that rats, for example, with a metabolic rate around 8 times higher than humans, respond differently than humans to a fast of the same duration.

If you work out in the gym – and if you read this blog, I assume that you do – you need to eat both enough calories and enough high quality protein within the 24 hours after your workout to sustain and increase muscle mass. Whey protein around the workout (right before or after) is superb for increasing muscle protein synthesis, and plenty of good protein such as from meat, eggs, yogurt, and so on during the next 24 hours should be optimal for muscle mass. You should eat at least 1 gram of protein per kilogram of body weight, which isn’t hard to do. (See the link for a full discussion on protein quantity, if you think that amount is too low.)

My own intermittent fasting schedule

My own intermittent fasting usually doesn’t begin until about 48 hours post workout, simply because the day after the workout, I feel somewhat fatigued and plenty hungry. But by dinner that night (one day after workout), I’m sufficiently rested and fed to start a fast.

The length of my fasts vary depending on a lot of factors, such as when my next scheduled workout is, and what else I have on my agenda for the day. Recently I’ve done several fasts of 20 to 22 hours, from about 6:00 P.M. to perhaps 4:00 P.M. the next day. There’s nothing at all heroic or even very difficult about that, and I’ve spoken to several people who practice 36-hour fasts. My more normal fasting duration is around 16 hours, that is, from the night before until noon the following day, taking usually one cup of coffee when I get up, and another or one of tea at mid-morning. If I’m fasting longer than 16 hours, then I’ll have more tea in the afternoon.

I lift weights once every 3 days. Therefore, given the above, I do a lengthy fast once every 3 days as well. I think this schedule works well. You lift one day and eat for two days, gaining muscle mass; then you fast on the third day, lowering insulin levels, increasing mitochondrial biogenesis, burning fat, lowering inflammation, and probably most of all, increasing autophagy. These are all life-extending and life-enhancing processes, and exercise itself also will do all these things, provided the exercise is of the right type, such as lifting and HIT.

It’s important to note that fasting strongly increases levels of growth hormone in humans, by up to 5-fold, which preserves and even increases muscle mass, as well as bone mass. So we see from both the rat experiment discussed above, as well as from good human data, that fasting has a salutary effect on muscle and bone.

Making your own fasting schedule

Your workout schedule may vary. In particular, younger guys often lift three or more times a week. In that case, it’s important to eat plenty of high-quality food and protein on lifting days, and you may be able to squeeze in one or two days a week of intermittent fasting. That being said, regular 16-hour fasts, even on lifting days, ought to be doable, provided you don’t need to lift in the early morning. You can fast from dinner the previous night and through the next morning, then take your protein shake and hit the gym around noon. Plenty of guys do exactly this.

To sum it all up: both weightlifting (and HIT) and fasting have healthful, anti-aging effects on muscle, increasing both metabolic power and muscle mass. Adapting your fasting schedule to the circadian rhythm of the fed and fasted states can provide a powerful boost to health, longevity, and muscle. Starting from the mindset that fasting was just too hard, I now fast at least a couple times a week – and it’s pretty easy – and consider it a necessary part of my health routine, one leg of the tripartite regimen of dietary phytochemicals, exercise, and intermittent fasting.