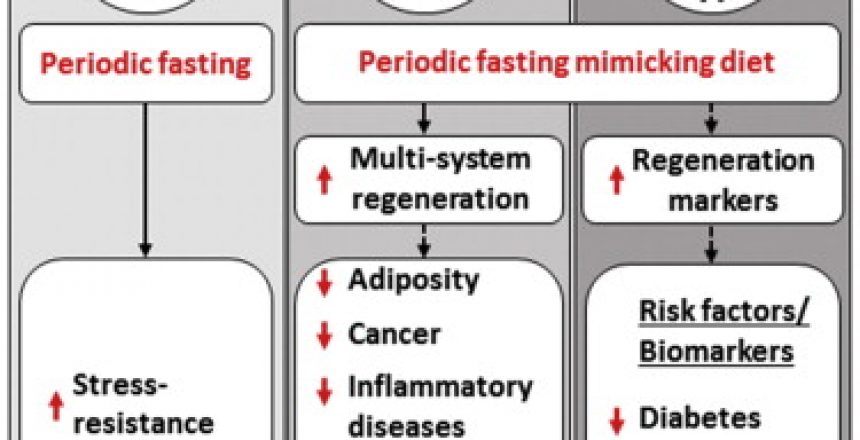 Prolonged fasting and a fasting-mimicking diet

Restricting calorie intake (calorie restriction, CR) in experimental animals by 30% or more is the most robust and effective strategy known to date to slow the aging process, increase lifespan, and improve the health of old animals. Intermittent fasting (IF) is perhaps an even better strategy for doing this, since it avoids many of the problems of CR such as weakness, immune suppression, and constant hunger; in IF, total calorie intake is often no less than in constantly fed animals (or humans), or sometimes, only slightly less, because the subjects of IF, whether human or animal, usually make up for lost intake by eating more during feeding times.

Intermittent fasting is one of several strategies for slowing aging that I discuss in my new book, Stop the Clock: The Optimal Anti-Aging Strategy.

In the book I also discuss going beyond IF and into so-called prolonged fasting. In prolonged fasting, the fast is extended and lasts two days or more. The great advantage of prolonged over intermittent fasting seems to lie largely in the lowering of levels of IGF-1, the growth hormone which promotes aging as well as a number of diseases of aging, notably cancer.

What if one could develop a diet that mimicked the effects of prolonged fasting while alleviating some of the hunger that goes with it, making the process easier? A first step in that direction has now been taken.

Valter Longo, probably the most prominent scientist who has studied fasting, and colleagues, have done this, as shown in their new study, A Periodic Diet that Mimics Fasting Promotes Multi-System Regeneration, Enhanced Cognitive Performance, and Healthspan. (Cell Metabolism.)

The study looked at the effects of the fasting-mimicking diet in yeast, mice, and humans.

In humans, the diet lasted for 5 days a month for 3 months, and was designed to provide 34 to 54% of the normal amount of calories. Day 1 of the diet was 1090 calories – not terribly low – and days 2 through 5 were 725 calories a day. Days 2 through 5 had 9% protein, 44% fat, 47% carbohydrate; interestingly, even though carbohydrate percentage seems relatively high, the number of calories was low enough that the diet was ketogenic.

Below is a figure from the article that shows the human results. 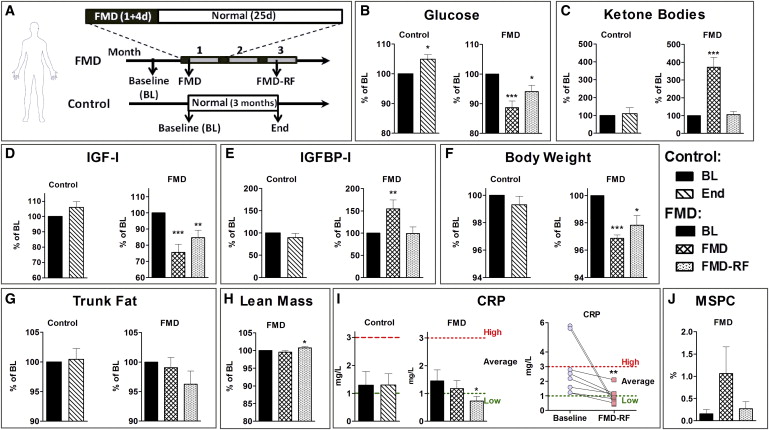 Results of the fasting-mimicking diet in humans.

Fasting blood sugar dropped by 11% and remained 5% lower even after the subjects resumed regular eating. IGF-1 dropped 24% and remained 15% lower after refeeding. Body weight dropped 3%, and almost the entire loss was fat, not muscle. In those subjects with a high C-reactive protein, a marker of inflammation and cardiovascular disease risk, most dropped into the normal range.

In summary, this study indicates that FMD cycles induce long-lasting beneficial and/or rejuvenating effects on many tissues, including those of the endocrine, immune, and nervous systems in mice and in markers for diseases and regeneration in humans. Although the clinical results will require confirmation by a larger randomized trial, the effects of FMD cycles on biomarkers/risk factors for aging, cancer, diabetes, and CVD, coupled with the very high compliance to the diet and its safety, indicate that this periodic dietary strategy has high potential to be effective in promoting human healthspan. Because prolonged FMDs such as the one tested here are potent and broad-spectrum, they should only be considered for use under medical supervision.

This diet would seem to lower disease risk considerably. The beauty of it is that 1) compliance was high; most of the subjects were able to adhere to it, in contrast to what would presumably be a low adherence rate to a straight 5-day fast; 2) the prescribed number of calories and macronutrient ratio is fixed, so it takes much of the guesswork out of the equation; just eat what they tell you for 5 days and biomarkers of aging and disease should diminish.

As they say in the study, a prolonged fast like this one should be cleared with one’s doctor.

Personally, I’ve never managed to fast longer than 24 hours, but with a prescribed regimen like this one, I might be persuaded to do the FMD for 5 days.