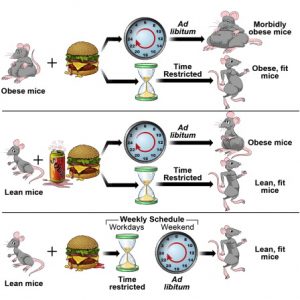 Graphic illustration of the experiment.

A new paper just published in Cell Metabolism shows just how effective intermittent fasting is against obesity and metabolic derangement: Time-Restricted Feeding Is a Preventative and Therapeutic Intervention against Diverse Nutritional Challenges. The study was done on mice, but I don’t see any reason that these results shouldn’t be completely applicable to humans. Here’s the abstract:

Because current therapeutics for obesity are limited and only offer modest improvements, novel interventions are needed. Preventing obesity with time-restricted feeding (TRF; 8–9 hr food access in the active phase) is promising, yet its therapeutic applicability against preexisting obesity, diverse dietary conditions, and less stringent eating patterns is unknown. Here we tested TRF in mice under diverse nutritional challenges. We show that TRF attenuated metabolic diseases arising from a variety of obesogenic diets, and that benefits were proportional to the fasting duration. Furthermore, protective effects were maintained even when TRF was temporarily interrupted by ad libitum access to food during weekends, a regimen particularly relevant to human lifestyle. Finally, TRF stabilized and reversed the progression of metabolic diseases in mice with preexisting obesity and type II diabetes. We establish clinically relevant parameters of TRF for preventing and treating obesity and metabolic disorders, including type II diabetes, hepatic steatosis, and hypercholesterolemia.

The study also supplied the graphical abstract you see at the top of the post, which highlights the study well.

The mice in each group were provided with the same type of food; the only thing that differed was the timing of the feeding. It was found that intermittent fasting (“time-restricted feeding”) protected against obesity, despite the fact that the same amount of calories was ingested; glucose tolerance was improved and insulin resistance reduced; and inflammation was reduced.

Mice fed an FS [fat + sucrose] diet ad libitum (FSA) consumed the same amount of calories as mice fed within a 9 hr window of the dark phase (FST), yet the FST mice gained less body weight over a 12-week period (21% compared to 42% for FSA mice).

It’s not clear to me whether the 21% gain in the IF mice was a “normal” weight gain or an abnormal gain of fat, but in any case they gained only half as much as the ad lib fed mice, and let me emphasize again, both groups consumed the same number of calories.

Of great interest is that the duration of intermittent fasting correlated negatively with weight gain; that is, the longer the fast, the less the gain. Even restricting feeding times just a bit retarded weight gain.

There was even an advantage in weight gain (much less) when animals did time-restricted feeding on weekdays but ate ad lib on weekends.

What I take away from this study is not only the efficacy of intermittent fasting to fight obesity and metabolic disorders, but also that almost any restriction whatsoever of feeding times ought to be of benefit. For instance, I’ve made the point previously that until quite recently, most everybody fasted for 12 hours daily, that is, between dinner and breakfast. Seems to me that if everyone adhered to that schedule, it could make a huge dent in the obesity epidemic. And of course, longer fasting was even more beneficial.

Another aspect of this is that it demolished CICO, or calories in, calories out, as an explanation for obesity.

Another point I made recently in my podcast was that intermittent fasting is not that difficult, at least it isn’t for me. Sixteen hours seems a breeze; in effect, you’re only skipping one meal, breakfast, and you can still have a cup or two of coffee in the morning, which readily decreases appetite. In my experience, however, a diet lower in carbohydrates facilitates this, as you just don’t seem to feel the same type and urgency of hunger when you eat lower carb.

In sum, more evidence that intermittent fasting is a uniquely healthy practice and is also anti-aging. However, as with other aspects of dealing with obesity, it requires some effort – it’s not a pill you can pop. So to me it seems that only those who are already reasonably fit, i.e. those used to making some effort, will take advantage of it.