The Sweet Spot for Intermittent Fasting 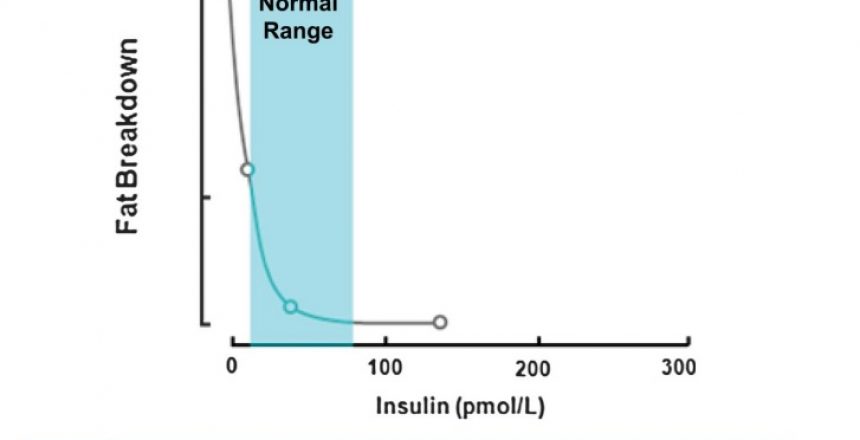 Intermittent fasting — the practice of going without food for some (undefined) period of time — has many health benefits. It can help prevent heart disease, speed fat loss, and slow or reverse aging.

There are a number of physiological mechanisms involved. It reduces inflammation and oxidative stress, leads to increased numbers and quality of mitochondria, and increases autophagy, the cellular self-cleansing process.

Many of the beneficial effects are entwined with lower levels of insulin.

The function of insulin is to promote energy storage and the growth of the organism. When insulin is increased, fat is stored in fat cells, and other cells take up glucose from the blood.

Most importantly, when insulin is increased, lipids can’t leave fat cells. Since fat loss is all about getting lipids out of fat cells to be burned, losing fat requires some attention to how diet, exercise, and fasting cause insulin to rise or fall.

Take a look at the following graph, taken from a paper by Volek et al. It shows that even small increases in insulin, within the normal range, virtually abolish lipolysis, or the breakdown of fat. 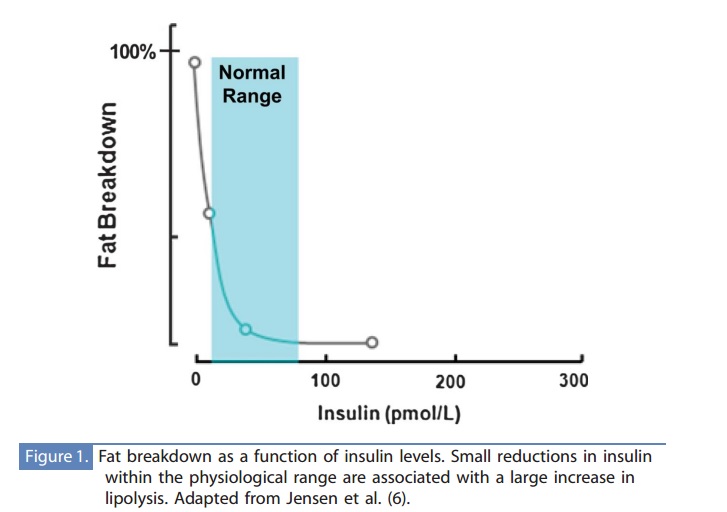 This is where intermittent fasting comes in, as one of its effects is to lower insulin levels and thus increase lipolysis. The question is, how long do you need to fast before insulin comes down?

Eating causes insulin to rise, the amount of the rise being dependent on a number of factors, such as type and amount of food eaten and the insulin sensitivity of the person doing the eating.

High amounts of carbohydrates and lower insulin sensitivity cause a greater rise in insulin.

Insulin increases and stays higher for several hours after eating – that is, during the “fed” state. The absence of food during fasting lowers insulin.

What duration of fasting lowers insulin and to what extent?

The Sweet Spot for Intermittent Fasting

Ted Naiman, M.D., whose great site is Burn Fat Not Sugar, posted the following graph recently (used with permission). The information comes from a paper, “Progressive alterations in lipid and glucose metabolism during short-term fasting in young adult men”.(1) 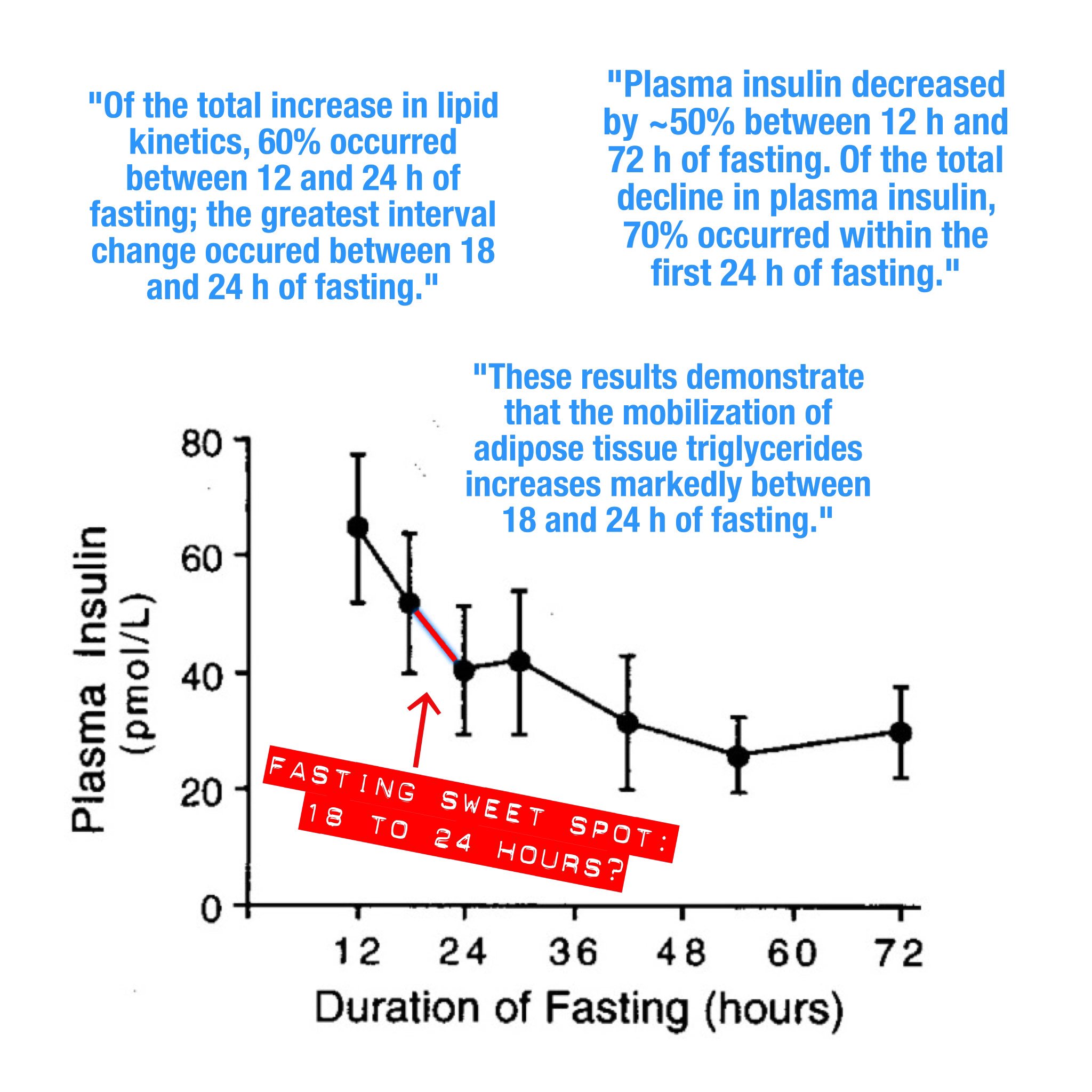 Dr. Naiman suggested that “the sweet spot for intermittent fasting” occurs between 18 and 24 hours of fasting, since this is the time period that sees the greatest drop in insulin and increase in lipolysis – the breakdown of fat.

Eyeballing the graph and comparing it to the one above from Volek shows that at an insulin level of about 40 pmol/L, lipolysis should be proceeding briskly.

There has been lots of guesswork as to how long intermittent fasts should last. One very obvious but usually non-verbalized reason is that most people don’t want to fast very long, and after a certain time most people get hungry. But they do want to lose fat.

A very common duration of intermittent fasting, one that I often do, is about 16 hours. A 16-hour fast involves skipping only one meal, typically breakfast, so it’s easy enough. A shorter fast than this wouldn’t involve missing even one meal, so we probably couldn’t characterize it as a real intermittent fast.

But according to the information above, in terms of insulin level, the fast is only really getting going at 16 hours. Extending it further than this ramps the drop in insulin and the increase in lipolysis.

If you can extend your fast into the afternoon, you get more benefits, and a 24-hour fast would do even more.

One thing I would add to Dr. Naiman’s “sweet spot” is that duration matters for insulin level. In other words, it’s not just a matter of achieving a low insulin level, but how long you stay there. Therefore, longer fasts can be of great benefit – though inconvenient in terms of hunger and a normal life.

One of the great benefits of intermittent fasting that I’ve written about often is that it promotes autophagy, the cellular self-cleansing process that breaks down and recycles damaged molecules and cellular organelles.

During the fed state, when insulin is increased, the rate of autophagy is low. During the fasted state, as insulin drops, autophagy increases dramatically, perhaps 5-fold.

Many of the anti-aging effects of calorie restriction and intermittent fasting come from the increase in autophagy – which I discussed at length in my book, Stop the Clock: The Optimal Anti-Aging Strategy.

A high rate of autophagy is characteristic of young organisms; with aging, autophagy decreases, and this allows cellular damage to accumulate. By fasting intermittently, autophagy rates can be reset to that of a younger person.

As we see above, one of the ways this happens is through lowering insulin.

Exercise improves insulin sensitivity, so for any given fasting stimulus, a person who is in shape will see insulin levels drop and lipolysis commence faster than someone not in shape.

Low-carbohydrate diets cause less of a rise in insulin, so probably someone on a low-carb diet who then fasts will also see a quicker drop of insulin into the range at which it promotes lipolysis and autophagy.

Autophagy is suppressed in the presence of insulin resistance and hyperinsulinemia.(2) This may be one of the main mechanisms behind the deleterious effects of diabetes and obesity.

It’s worth noting that the study cited by Dr. Naiman used healthy young men as subjects, and they presumably had good insulin sensitivity.

Fasting as an anti-aging intervention

As noted, by increasing autophagy, intermittent fasting causes the breakdown and clearance of damaged cell parts.

Aging just is the accumulation of damage. As we age, we can no longer recycle damage as readily; cell constituent turnover decreases.

We saw in the interview with Dr. Michael Fossel  that activating telomerase has the effect of increasing cell turnover to youthful levels by lengthening telomeres.

Dr. Fossel roundly rejected my suggestion that, until telomerase therapy comes along and/or it’s shown to truly reverse aging, intermittent fasting is the best way to slow aging.

But, he’s wrong. If the accumulation of damage characterizes aging, and if the aging organism is characterized as being less able to clear damage, then increasing the rate of clearance is the best way to slow aging.

One of the best ways to increase clearance of damage, and hence to slow aging, is through intermittent fasting.

PS: Check out my Supplements Buying Guide for Men, as well as my books, Dumping Iron, and Stop the Clock.