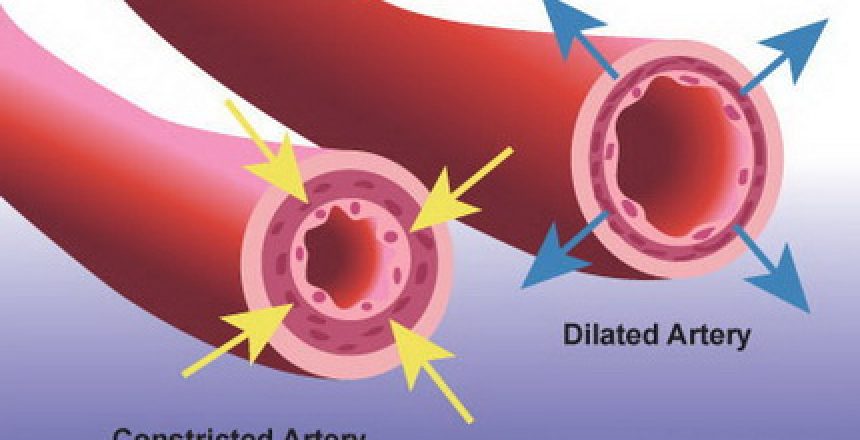 Common and cheap blood pressure drugs extend lifespan in animals by inhibiting the renin-angiotensin system. This pathway for life extension is both different from other pathways, such as mTOR or the insulin/IGF-1 pathways, and intertwined with them.

Animals, including humans, finely control blood pressure through both hormones and the nervous system. Blood pressure control is very important, since loss of blood pressure can lead to shock and death, for instance in blood loss, or in extreme illness.

Anti-hypertensive drugs have several different mechanisms, but for the purposes of this article, and seemingly most importantly for life extension, we’ll focus on two types of drugs that affect angiotensin, namely angiotensin converting enzyme (ACE) inhibitors, and angiotensin receptor (AR) blockers. There seems to be little difference in effectiveness between ACE inhibitors and AR blockers in terms of mortality, at least in certain classes of patients.

Of course, as people get older, they get fatter and lose muscle, insulin resistance increases, and they become more sedentary, and those factors all affect blood pressure.

Yet aging itself seems to be a factor even absent these. Blood pressure rises with age in lab animals, for instance.

In mice, disruption of the angiotensin II receptor increases lifespan. Not only that, but the increase is large, as large as that caused by insulin receptor disruption. See chart below. 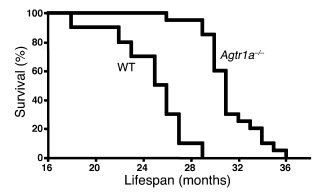 The average lifespan of normal mice was 24 months, that of genetically disrupted angiotensin receptor knockout mice was 31 months, about a 26% increase. When all the wild-type animals had died, 85% of the knockout mice were still alive. Body weights and physical activity between the two groups were the same, so this was not an artifact of reduced food intake, i.e. calorie restriction. (Many life-extension treatments appear to work by inducing lower food intake.)

However, another study found that long-term angiotensin inhibition resulted in less fat tissue.

In rats, long-term angiotensin blockade exerts “a significant protective effect on the function and structure of the cardiovascular system in all treated animals.” Of interest, the animals were divided into 3 groups: control (no treatment), a group treated with an ACE inhibitor, and a group treated with an AR blocker. There was no difference between the 2 treatments, which “clearly indicates that most of the effects are exerted through AT1 receptors. An outstanding finding was the significant and similar prolongation of life span in both groups of treated animals compared with untreated control animals.” The average survival of the control group was 735 days, while the two treatment groups lived 892 and 877 days, respectively, a large effect.

ACE inhibitors even robustly extend lifespan in the worm C. elegans which surprisingly have a a molecule homologous to ACE.

In spontaneously hypertensive rats, ACE inhibition doubles the lifespan to that of normal rats. Maybe that should be expected; another way of saying this is that spontaneous hypertension halves lifespan. However, it does show the crucial importance of blood pressure.

So, can you get all the effects of calorie restriction just by inhibiting the angiotensin system? Could be, yes.

“…both animal and human evidence show that RAS blockade can prevent age-related structural and functional alterations in several organs, progression to the metabolic syndrome, the development of diabetes, hypertension and some of its consequences, cardiovascular changes, and cerebral and cognitive impairments. The latter conditions act as surrogate markers of the ageing process, and at the same time, they accelerate age-related structural and functional decay in various tissues.” (Above ref.)

Another class of anti-aging drug

The 3 most powerful anti-aging drugs appear to be rapamycin, metformin (or the similar supplement, berberine), and aspirin. There are other drugs and supplements that promote life extension, such as resveratrol and curcumin, and it’s difficult to make direct comparisons as to which of these are better, or which combinations, etc., but the first 3 are generally accepted as having the most potential to extend human lifespan.

We might be able to add a fourth class of drugs to the list of powerful life-extension agents, namely those that affect and inhibit the renin-angiotensin system, i.e ACE inhibitors and AR blockers.

Both classes of these drugs are widely used to lower blood pressure. They’re also quite cheap, perhaps a few dollars a month for either. When taken in low doses, they seem to have few side effects, and as far as I can tell, doctors are not hesitant about prescribing them.

Of the drugs mentioned above, only rapamycin is expensive.

Alan S. Green, M.D., who practices rapamycin-based treatment of diseases of aging, uses ACE inhibitors as part of his anti-aging regimen, in addition to rapamycin, metformin, and aspirin.

You can find my interview with Dr. Green here.