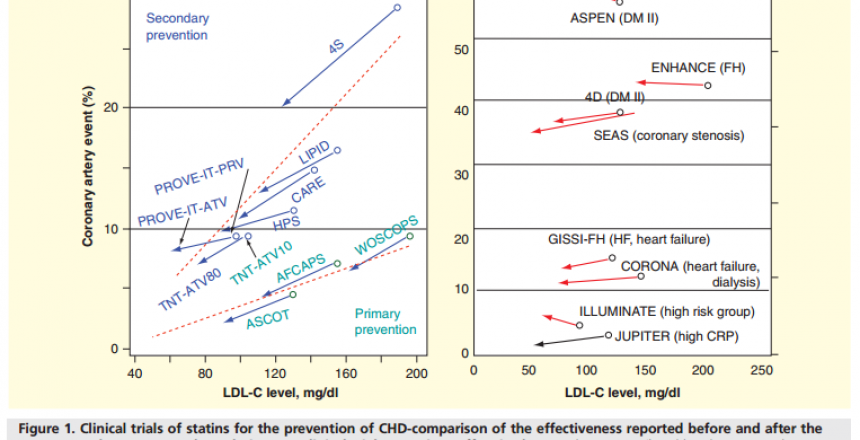 Statins are used to prevent heart disease, and are among the most prescribed drugs in the world, racking up some $20 billion in sales as of 2012. One might think that statins are safe and effective drugs, but the real question is, do statins work?

The amount of money that drug companies make from statins could lead someone of a skeptical bent to question their efficacy.

Consider that a news report the other day reported that 80% of data from clinical trials in China has been fabricated.

The report uncovered fraudulent behaviour at almost every level, and showed that some pharmaceutical companies had hidden or deleted records of potentially adverse side effects, and tampered with data that didn’t meet their desired outcomes.

In light of the findings, 80 percent of current drug applications, which were awaiting approval for mass production, have now been cancelled.

Now, this was in China, so who knows what the level of drug company shenanigans takes place in the West. But it seems clear enough that where a lot of money is involved, which is the case when drug companies do clinical trials, there’s more incentive to alter or even outright fake data.

Why did statins quit working after 2004?

In a previous article, I discussed why statins might cause atherosclerosis and heart failure. The mechanism may be related to how higher cholesterol is associated with longer life.

From the same paper on statins and atherosclerosis1 comes the following chart, which shows clinical trials of statins both before and after 2004, when new disclosure regulations regarding clinical trials came into effect. 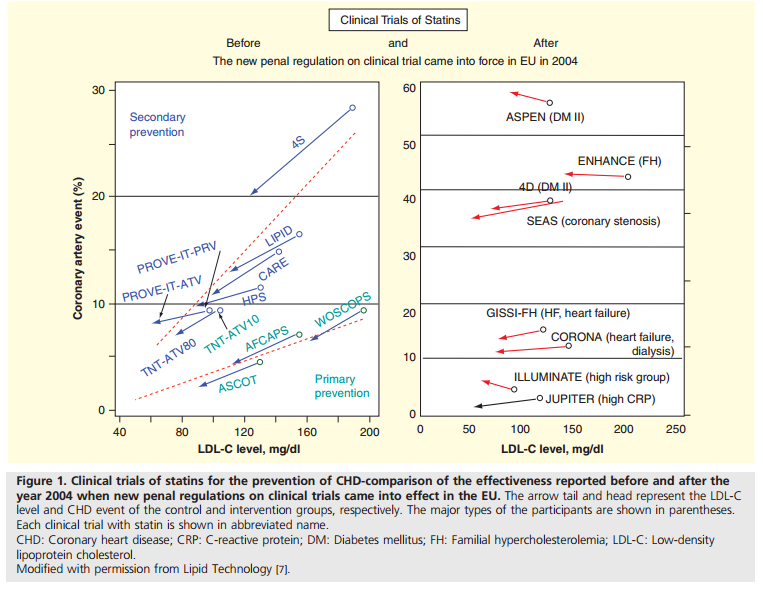 Before 2004 and the advent of full disclosure regulations, statins showed both large reductions in LDL cholesterol and in the number of coronary artery events.

After 2004, the lowering of LDL still took place, but the effect on coronary artery events was either low, non-existent, or actually increased with statins.

Since the introduction of statins to clinical medicine in 1987, several kinds of statins were reported to be effective in lowering LDL-C and also preventing CHD events (mostly in 1990s). However, unfair and unethical problems were associated with clinical trials reported by industry-supported scientists, and new penal regulations on clinical trials came into effect in 2004 [4,5]. After 2004–2005, all clinical trials, performed by scientists relatively free of conflict of interest with pharmaceutical industries, reported that statins were effective in lowering LDL-C but no significant beneficial effects were observed for the prevention of CHD (FIGURE 1). Currently, the majority of scientists continue to claim that statins are effective in preventing CHD, but these claims are based on metaanalyses of reports, including those published before the EU regulation (mostly in 1990s). [My emphasis.]

There are a number of ways that studies can be fudged statistically, and from the looks of it, the drug companies used them.

I’ll just leave you with some closing thoughts by Paul J. Rosch, M.D., on cholesterol, statins, and heart disease.2

The belief that coronary atherosclerosis is due to high cholesterol from increased saturated fat intake originated from experiments in herbivorous animals. It was reinforced by reports allegedly demonstrating this sequence of events in various populations but ignoring contradictory data. The idea has been perpetuated by powerful forces using similar tactics to preserve the profit and the reputations of those who promote this doctrine. Opponents find it difficult to publish their scientifically supported opinions. The advent of statins has further fueled this fallacious lipid hypothesis, despite compelling evidence that their effect is not due to cholesterol lowering and that serious side effects have been suppressed and alleged benefits have been hyped. The adverse effects of the cholesterol campaign on health, quality of life, the economy and medical research are inestimable. It is imperative that public health officials, physicians and patients are apprised of proof that it is misguided, malicious and malignant.[My emphasis.]

Dr. Rosch is the editor of a very good book that I’m currently reading: Fat and Cholesterol Don’t Cause Heart Attacks — And Statins Are Not the Solution.