Does Fungal Infection Cause Alzheimer’s? 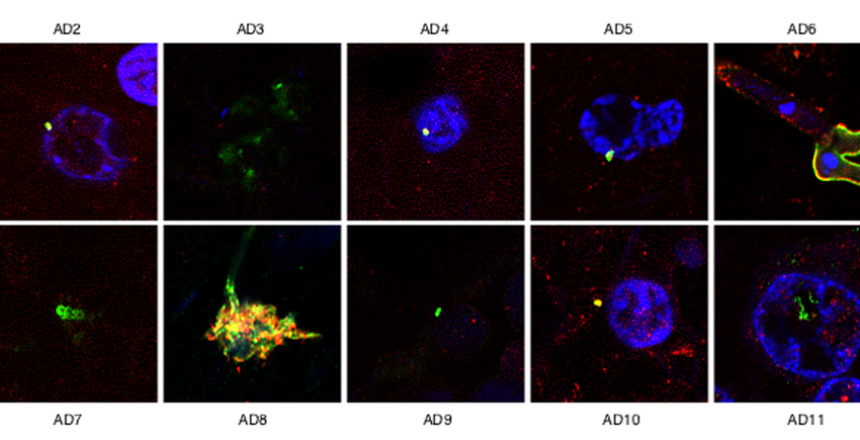 Some scientists have proposed infection as a cause of Alzheimer’s disease, and now a group of researchers may have retrieved the smoking gun: Different Brain Regions are Infected with Fungi in Alzheimer’s Disease.(1) Does fungal infection cause Alzheimer’s?

The researchers found that in brain matter from ten different patients with Alzheimer’s, all of them were infected with fungi. There was no fungi in the brains of ten control patients.

The amyloid plaques that are characteristic of Alzheimer’s are composed of a protein, amyloid beta, and they show strong antimicrobial activity. In fact the pathogen that is most sensitive to amyloid beta is the fungus, Candida albicans.(2)

As fungi are typically slow-growing organisms, this can explain the disease’s slow progression. There are also at least two reports in the literature of people being cured of Alzheimer’s disease when doctors found fungi (Cryptococcus) and treated the patients with anti-fungal drugs. Their mental status returned completely to normal.(3,4)

If true, this makes sense of many of the facts around Alzheimer’s and provides a basis for prevention and treatment.

Fungi thrive on sugar and iron

Alzheimer’s disease has been called “type 3 diabetes”(5); the brain in Alzheimer’s is characterized by insulin resistance and faulty insulin and IGF-1 signaling.

Fungi thrive on sugar. If glucose levels in the brain and its blood vessels was chronically high or uncontrolled, then it provides a an easy food source for fungi. A list of the different species of fungi found in Alzheimer’s brains (6) shows Candida albicans and Saccharomyces cerevisiae among them.

In one study, a full 25% of diabetics had an oral Candida infection.(7) Poor blood sugar control was associated with a 13-fold increase in risk of a Candida infection. Candida is the most common cause of fungal infections, and it thrives on sugar.

Saccharomyces cerevisiae is the yeast that ferments beer and wine, and also can cause infections. In fermentation, it uses the sugar in mash or grape juice to make alcohol. So it thrives on sugar too.

There’s another factor, iron, which has been shown to be elevated in the brains of Alzheimer’s (and Parkinson’s) patients.

Here, I could do no better than quote Eugene D. Weinberg (whom I interviewed) on iron and infection:

Iron is dangerous because it is an essential growth factor for most bacterial, all fungal and all protozoan infections as well as for all cancer cells. Although viruses do not have independent metabolism, enhanced host iron is needed for viral synthesis.

Iron is crucial growth factor for pathogenic microorganisms, and they have a number of ways of obtaining it, including breaking down tissue (such as in hemolysis) or ingesting ferritin. In the eternal arms race between pathogens and hosts, we have developed a number of ways to withhold iron from pathogenic invaders.

One further mechanism links infection with Alzheimer’s, and that is the declining immune system in aging. Older people suffer from more infections because of this.

How to prevent Alzheimer’s

It follows from all of the above that Alzheimer’s can be prevented.

The first step is to avoid insulin resistance and diabetes to ensure less of a food supply for pathogenic fungi. You do this by:

The second step is to keep iron levels in the low normal range. This deprives invading pathogens of their critical growth factor.

Practicing hormesis will also increase the degree to which iron is regulated and sequestered, so that free iron isn’t available to cause damage and provide sustenance for microorganisms.

The authors of the first-cited paper point out that

There are at present a number of highly effective antifungal compounds with little toxicity. A combined effort from the pharmaceutical industry and clinicians is needed to design clinical trials to test the possibility that AD is caused by fungal infection.

I know that if I or a loved one had Alzheimer’s, I wouldn’t be waiting around for a clinical trial that may never happen. (There’s little money in anti-fungal drugs.) I would be harassing a doctor until he agreed to a course of anti-fungal treatment.

PS: More like this in my books Dumping Iron and Stop the Clock.

PPS: Check out our Supplements Buying Guide for Men.