Health Screening Is Ineffective and May Cause Harm 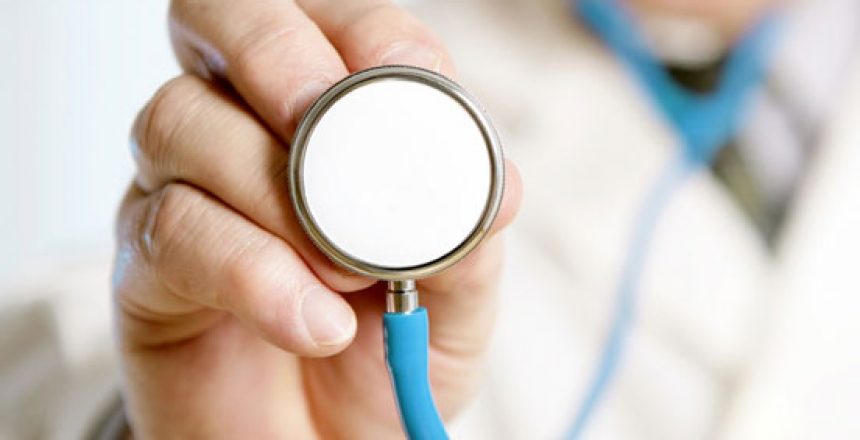 Health screening is the practice of checking someone for health conditions he or she may not know about. In other words, health screening means medically examining an apparently healthy person, instead of the normal practice in which a person seeks out a doctor to diagnose an illness or treat symptoms of a disease. Examples include screening for prostate, breast, lung, and cervical cancer, as well as cardiovascular disease. Contrary to what most people think, health screening is ineffective and may cause harm. That’s what the evidence says.

Why health screening may cause harm

The aim of health screening is to detect a disease that doesn’t currently have any symptoms.

If the screening test(s) or exam generates a false negative result, then the disease goes undetected, and the screen has failed to do what it was meant to do.

If the screen generates a false positive, then the patient can get treated for a disease that doesn’t exist, and that can result in serious harm. Chemotherapy or a mastectomy for non-existent cancer would almost certainly result in avoidable harm to a patient, as would unnecessary invasive coronary artery procedures.

How prevalent are the problems of false positive tests and unneeded treatment? They appear to be large enough to turn the process of health screening into one that causes more harm than benefit, as we’ll see.

Why health screening may be ineffective

In the case of cancer, which is perhaps the most common reason for health screening, the burden on patients is measured in terms of survival, usually 5-year survival. If a cancer patient is treated and survives for 5 years, that is usually deemed a cure, even if the patient dies at 5 years and 1 day after diagnosis.

This aspect of measuring the consequences of cancer or its treatment when using a health screen results in lead-time bias.

The point of health screening for cancer is to catch the cancer early, on the grounds that the earlier the cancer is found and treated, the better the prognosis. However, survival time, by which treatment results are measured, may be extended by finding the cancer early, even if the patient dies on the same day that he would have otherwise. That’s lead-time bias. See chart below. (Source.) 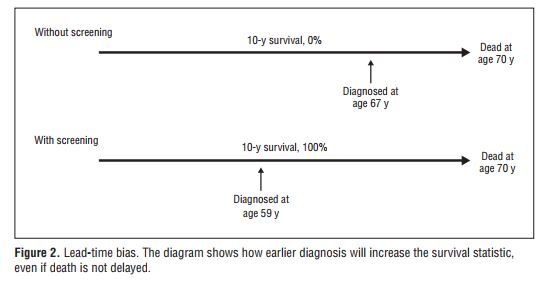 In this example, the patient has received no benefit from cancer screening, even though the case would be touted as showing a much longer survival. 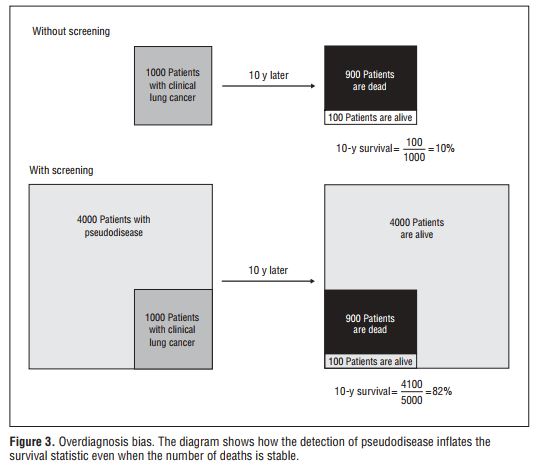 In this (hypothetical) case, no patients have been helped but many have been harmed.

Now that we’ve seen how health screening may be ineffective and cause harm, let’s look at the actual evidence.

Lung cancer: In the Mayo Lung Project Randomized Trial, patients who were screened for lung cancer via chest x-ray had more cancers detected and were more likely to be in an early stage of lung cancer; they had almost double the 10-year survival rate. Yet the mortality in both groups, screened and non-screened, was the same. Therefore increased survival was the result of lead time and overdiagnosis.

Breast cancer: In breast cancer screening by mammography, a meta-analysis found no difference in 10-year survival between screened and non-screened. However, the screened group had up to 20% more lumpectomies and mastectomies as well as radiation treatment. The authors state:

If we assume that screening reduces breast cancer mortality by 15% and that overdiagnosis and overtreatment is at 30%, it means that for every 2000 women invited for screening throughout 10 years, one will avoid dying of breast cancer and 10 healthy women, who would not have been diagnosed if there had not been screening, will be treated unnecessarily. Furthermore, more than 200 women will experience important psychological distress including anxiety and uncertainty for years because of false positive findings.

The authors believe that women should be fully informed of both potential benefits and harms before they enroll in screening. In an older article (from 2000), one of the same authors (with a different co-author) states:

Screening for breast cancer with mammography is unjustified. If the Swedish trials are judged to be unbiased, the data show that for every 1000 women screened biennially throughout 12 years, one breast-cancer death is avoided whereas the total number of deaths is increased by six. If the Swedish trials (apart from the Malmö trial) are judged to be blased, there is no reliable evidence that screening decreases breast-cancer mortality.

Even breast self-examination in women younger than about 35 years old may cause more harm than good:

It is argued that women who find asymptomatic benign breast lesions by breast self-examination (BSE) are exposed to unnecessary anxiety, unnecessary medical investigations (including invasive procedures), and potential risks of false reassurance. “False positives” so greatly outnumber patient-detected cancers below age 30 to 35 that the potential for net benefit from BSE in this age group is remote. BSE in younger women, by encouraging invasive and costly medical investigation of many asymptomatic benign breast lumps needing no treatment, could well do more harm than good.

One exception in health screening that may be beneficial is geriatric interventions, which significantly reduce the odds of falls and hospital admissions and increased the odds of living at home.

Why health screening doesn’t work: medical care may cause harm

There are several reasons why investigators have found that health screening produces little to no effect on mortality.

One reason is that when you see a doctor for any reason, he may check you out for other illnesses. For instance, just about everyone gets a lipid (cholesterol) panel run often; doctors check blood pressure regularly. So seeing a doctor when you have no illness may be superfluous.

A more important reason is that medical care does not entail all benefit and no harm.

If you are screened for cancer and some suspicious sign is found, you may be subject to everything from further exams, to a biopsy, to chemotherapy, and whether you have cancer or not, those are associated with harms ranging from anxiety to death. Obviously, it’s even worse if you have no cancer and are subject to these.

Even for something as simple as a lipid panel, the results could encourage a doctor to prescribe a statin, which could lead to worse health.

Prescription drugs carry risk, maybe even high risk. So if you have some form of health screen, you could end up being prescribed a high-risk drug. Above we noted that breast cancer screening resulted in no decrease in mortality, but those screened has 20% more mastectomies; if some of those patients did not in reality have cancer, they suffered harm from getting checked.

What about ferritin, a test for body iron that most people, especially men, ought to know the results of? In this case, potential for harm is minimal to non-existent, since donating blood or therapeutic phlebotomy are the most common procedures for dealing with a high ferritin, and these have low risk. The same goes for checking testosterone, since interventions involve a low risk of harm. In any case, checking levels of ferritin or testosterone, or other hormones, such as thyroid, do not necessarily entail screening for disease.

The impetus that has led health authorities to recommend health screening may have come with good intentions. On its face, they do make some sort of sense. Unfortunately, risks are inherent to medical treatment, and diagnosis isn’t perfect.

Trade-off between benefit and harm is crucial for health screening:

Thus, health screening should only be recommended when five criteria are satisfied:

(1) the burden of illness should be high,

(2) the tests for screening and confirmation should be accurate,

(3) early treatment (or prevention) must be more effective than late treatment,

(5) the cost of the screening strategy must be commensurate with potential benefit.

Probably very little health screening satisfies all of those criteria.