Hormesis for Health and Longevity: A Guide 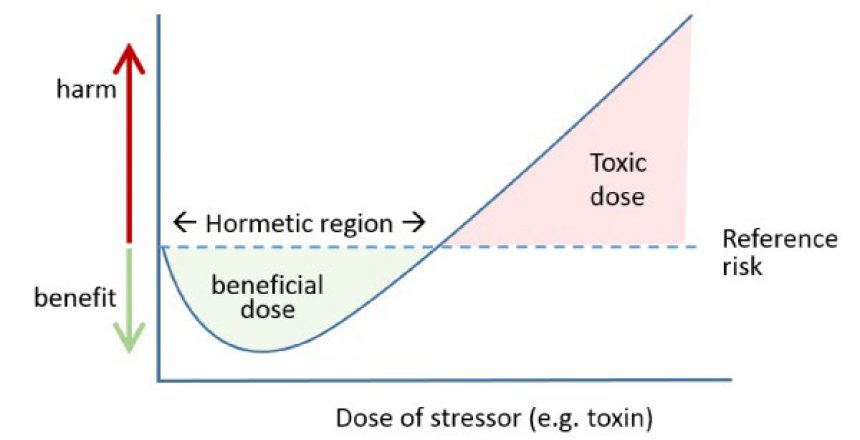 It’s obvious that people we refer to as couch potatoes have worse health than others, although these days the couch potatoes outnumber the others. The reason for their worse health is that they are not placing enough stress on their bodies, which adapt to a low-stress state. Then when a real stress comes along, they’re not prepared for it. The phenomenon called hormesis is one in which small doses of toxins or other stressors cause the increase in the body’s (or cell’s) stress defense mechanisms. Hormesis is robustly associated with good health and long life. Anyone wanting to take charge of his health should know about it, so here’s a guide to hormesis for health and longevity.

Hormesis has been known, albeit in a vague way, for a long time. Famously, King Mithridates VI of Pontus allegedly took small doses of various poisons in order to fortify himself against real doses. Whether that’s true or not, it shows that people knew enough about how that works to concoct a legend about it.

Hormesis is the beneficial effect caused by low levels of potentially toxic agents. (Ref.) In essence, what doesn’t kill you makes you stronger, although that expression should be tempered by the fact that doses of a stress much less than that needed to kill you have beneficial, hormetic effects.

Many types of stressors can cause hormesis, for example:

Hormesis is characterized by a so-called J-shaped (sometimes U-shaped) curve, in which a small amount of a substance or stress results in better health than a zero amount. Increasing the dose increases the stress response up to a point, beyond which increasing doses worsen health.

This curve illustrates the concept. With increasing exposure, or dose, health risk decreases to a nadir of risk, after which it rises. At some point of increasing dose, the risk rises above that seen initially, at which point the dose can be truly said to be toxic and promoting ill health. Sometimes this curve is shown upside down, but the meaning is the same.

Hormesis activates biochemical stress defenses, most notably through the Nrf2 transcription factor that regulates the expression of antioxidant, protective mechanisms. Among these mechanisms are enzymes like catalase, superoxide dismutase, glutathione peroxidase, and the so-called phase 2 detoxifying enzymes.

A principle of hormesis is that of pre-conditioning. To use an example, if you train to run 10 miles, you become pre-conditioned, and if you had to run 15, you could do it. If you only trained for 1 mile, and then had to run 10, you would not be able to, or only with great difficulty and harm to your health.

The opposite of hormesis is, for lack of a better term, one that I’ve called the couch potato lifestyle, one in which the organism is never challenged. Then, when an untoward event or stress or toxin comes its way, it’s unprepared.

Activating stress response pathways via hormesis is essential for health and anti-aging.

Probably the most familiar of hormetic agents is exercise. When you exercise, you consume more oxygen than usual to burn more energy, and this results in increased levels of free radicals (also known as reactive oxygen species, ROS).

…exercise-induced ROS production plays a role in the induction of antioxidants, DNA repair and protein degrading enzymes, resulting in decreases in the incidence of oxidative stress-related diseases and retardation of the aging process.

Phytochemicals are plant-derived molecules with beneficial health effects. They include phenols, flavonoids, and others.

While animals can defend themselves by fighting or fleeing, plants are literally rooted to the ground and thus can’t do that. It may come as a surprise that plants do not want to be eaten.

To defend themselves, plants use chemical warfare.

Many or most of the various phytochemicals that benefit human health are toxins, low doses of which upgrade stress defense mechanisms and prevent cancer and heart disease.  Dietary phytochemicals are likely responsible for the health benefits of fruits and vegetables.

Coffee, tea, chocolate, and red wine also have known health benefits; as these are all plant products, the polyphenols and other chemicals in them provide the benefits.

Many of these compounds may also chelate iron, accounting for a great deal of their health benefits. Chocoalte appears to be a huge source of polyphenols, larger than red wine and green or black tea.

Solar radiation causes the production of vitamin D in the skin, but in addition, the radiation itself may be beneficial due to hormesis, and the same goes for other forms of radiation both cosmic and terrestrial.  Low dose radiation

Nuclear shipyard workers appear to have lower cancer rates than others.  Radiation increased the lifespans of British radiologists. In airline pilots and crew, who are exposed to cosmic radiation, a “significant negative risk trend for all-cause mortality was seen with increasing dose [of radiation].” The health effects of many spas have been attributed to radiation.

Sunbathing is also associated with longer life, and sun avoidance has been compared to smoking a pack of cigarettes daily.

The map above (from SUNARC) shows colon cancer mortality in white men in the U.S., 1970-1994. Areas with lots of solar radiation had much lower death rates; the results for breast and ovarian cancer, as well as multiple sclerosis are similar.

How much radiation exposure is healthful, and how should you get it? I’m not sure anyone knows the answer. As it concerns solar radiation, sunburning should be avoided. I’ve seen reports of people wearing radioactive rocks around their necks; I wouldn’t be willing to do that though unless we had a much better understanding of doses needed as well as how much radiation the rocks emit.

Both heat and cold are stresses.

Alcohol functions as a low-dose toxin and initiates hormesis. Alcohol is robustly associated with lower death rates; however, much of the benefit comes from red wine, so in most cases, plant polyphenols play a greater role than alcohol itself in promoting health.

Calorie restriction and intermittent fasting are solid life-extension interventions, and they produce a stress.  They both promote hormesis.

Please don’t try this at home, but very low doses of methylmercury greatly increased the hatching rate of mallard duck eggs, and it promotes hormesis in C. elegans.

Activating hormesis is robustly associated with better health and longer life. Most anti-aging and life-extending interventions work via hormesis.

The body contains robust anti-aging mechanisms, but they must be activated before they work. The couch potato lifestyle, which features lack of exercise and round-the-clock eating of junk food, is  anti-hormesis.

To slow aging and extend lifespan, use a broad program of hormesis using the factors above. That program would consist of exercise, consumption of phytochemicals, sun exposure, intermittent fasting, and heat and/or cold exposure.

PS: Check out my books, Dumping Iron, Muscle Up, and Stop the Clock. (Stop the Clock is most relevant for hormesis.)