How Much Vitamin D Do We Need? 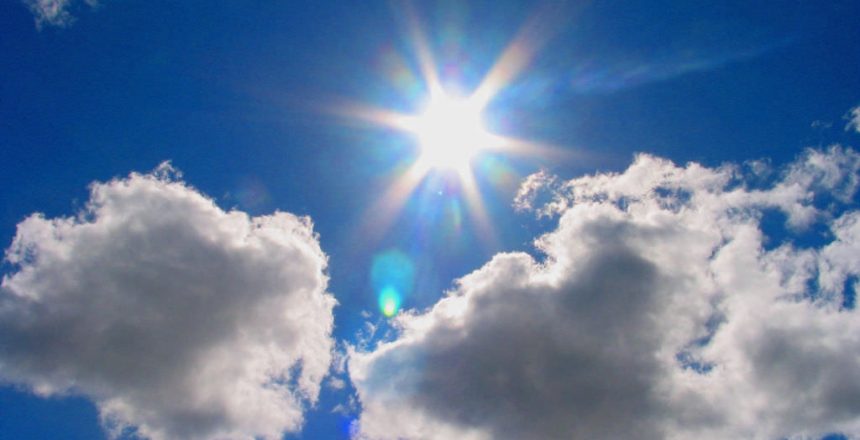 Do we get enough vitamin D for good health? Many people are vitamin D deficient, and what’s more, there’s evidence that the amount of vitamin D in supplement form that relieves deficiency is greater than previously thought. How much vitamin D do we need?

The big vitamin D mistake is that health authorities, in particular the Institute of Medicine, greatly underestimated the amount of supplemental vitamin D that will make someone vitamin D sufficient, or to keep that person sufficient.

The Institute of Medicine calculated that 600 IU of vitamin D daily would keep most (97.5%) people at a vitamin D blood level of greater than 50 nmol/L, which in more familiar units is 20 ng/ml. However, their calculation was shown to be a mistake.

Without going into all the details (which you can read in the paper), the authors calculated that 8895 IU of vitamin D daily would be needed to get most people above the 50 nmol/L limit. Huge difference. The authors also state, “As this dose is far beyond the range of studied doses, caution is warranted when interpreting this estimate. Regardless, the very high estimate illustrates that the dose is well in excess of the current RDA of 600 IU per day and the tolerable upper intake of 4000 IU per day.”

A different group of scientists confirmed that this estimate was in the ballpark, with  about 7000 IU of vitamin D daily, from all sources including the sun, needed to achieve 50 nmol/L in most people.

A meta-analysis of studies on vitamin D and mortality showed an inverse correlation between vitamin D blood levels and death rates. See chart below. At vitamin D levels that indicate clear deficiency, death rates were almost twice as high as when blood levels were normal. 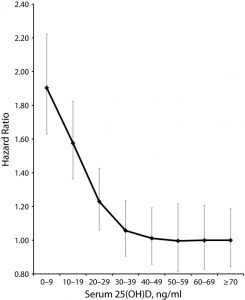 The meta-analysis found that the point at which higher levels were no longer associated with lower death rates with statistical significance was 36 ng/ml, or about 90 nmol/L. Assuming this analysis is correct, people should strive for blood levels at least that high. That’s about 80% higher than what the Institute of Medicine recommended.

A pediatrician, Dimitrios T. Papadimitriou, calls the calculations of the Institute of Medicine the Big Vitamin D Mistake. He writes:

Since all-disease mortality is reduced to 1.0 with serum vitamin D levels ≥100 nmol/L, we call public health authorities to consider designating as the RDA at least three-fourths of the levels proposed by the Endocrine Society Expert Committee as safe upper tolerable daily intake doses. This could lead to a recommendation of 1000 IU for children <1 year on enriched formula and 1500 IU for breastfed children older than 6 months, 3000 IU for children >1 year of age, and around 8000 IU for young adults and thereafter. Actions are urgently needed to protect the global population from vitamin D deficiency.

Note that these amounts of vitamin D are from all sources put together: sun, food, and supplements.

A review on vitamin D intake concluded that the maximum safe dose, or Tolerable Upper Intake Level, is 10,000 IU daily. That doesn’t necessarily mean that this is the best dose, but that no toxicity has been seen in human clinical trials at that dose. Higher doses of vitamin D can be toxic. In contrast, the Endocrine Society recommends an upper limit of 4,000 IU daily.

Vitamin D toxicity appears to be rare. The media recently reported on a study on vitamin D usage and misinterpreted it to claim that it’s dangerous to supplement with vitamin D.

The amount of vitamin D needed to attain levels associated with better health have been underestimated.

The only certain way to know whether you have adequate vitamin D is through a blood test.

Getting vitamin D through sun exposure is the best way to get enough vitamin D, one reason being that sun exposure has other benefits. But as we saw above, for many people, there’s not enough sun to increase vitamin D blood levels outside the summer months.