Insulin Is at the Nexus of Health, Disease, and Aging 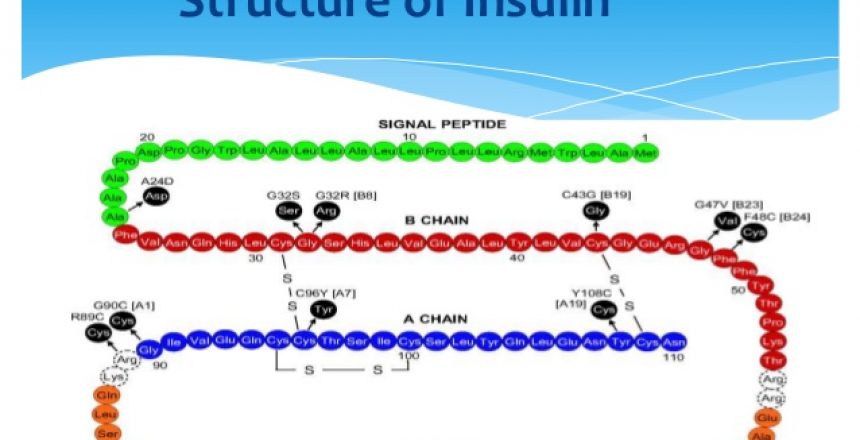 In the last two articles, we discussed the importance of a low-insulin lifestyle, and how modern foods, particularly seed oils, increase insulin resistance. In this article, we’ll discuss why insulin is at the nexus of health, disease, and aging, and why it may be the single most important factor within your control.

Insulin is strongly connected to aging. Typically, as animals and humans age, insulin resistance increases and insulin blood levels increase to compensate for it.

The first hint that insulin controls aging came when it was discovered that the worm C. elegans could live twice as long when it had a mutation in its equivalent of the insulin receptor.

Lower insulin levels increase the lifespan of mice, and since mice are mammals, we may have reason to think that lower insulin could increase human lifespan. FIRKO, or fat-specific insulin receptor knockout mice live 18% longer than normal mice, and are protected against obesity.

In humans, insulin levels rise with age, and aging is a risk factor for diabetes. (Ref.)

Yet centenarians have a “preserved insulin action and glucose tolerance”, probably a good reason why they got to be centenarians. (Ref.)

So, it seems clear that insulin promotes aging, and this fits with lots of other evidence on what promotes, and what counteracts, aging.

If insulin were truly and intimately involved in aging, we’d expect to see that interventions that fight aging and increase lifespan also lower insulin levels. And we do see that.

Calorie restriction, the most robust life-extension intervention known, also lowers insulin, and this is likely connected to its efficacy.

Another study compared humans on calorie restriction, body-fat matched endurance runners, and Western diet sedentary controls. The CR group had the lowest insulin, although not significantly different from the runners, and both were much lower than the Western diet group. (Ref.)

Intermittent fasting both acutely and chronically lowers fasting insulin levels. (Ref.) When rats are fed a high-fat diet, they develop diabetes, but when fed the same diet but within an 8-hour daily feeding window, they do not develop diabetes. (Ref.)

Metformin, the diabetes drug, increases lifespan in mice. (Ref.) Metformin increases insulin sensitivity and lowers insulin levels. Mice on metformin had much lower insulin levels, though not as low as calorie-restricted mice.

Exercise is of course one of the best health interventions, period. 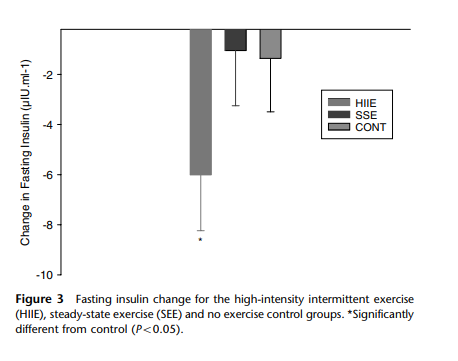 Resveratrol, the phytochemical found in grapes and some other plants, improves health of mice on a high-fat diet, and lowers their fasting insulin by over half. (Ref.)

Light to moderate alcohol consumption is associated with better health.  A randomized controlled trial found that one or two daily drinks (15 to 30 grams) for eight weeks in healthy women lowered fasting insulin. (Ref.)

What all anti-aging interventions do

Look at the following chart, which shows the effects of aging and major longevity interventions, including gene mutations, on mouse phenotypes. (Source.) 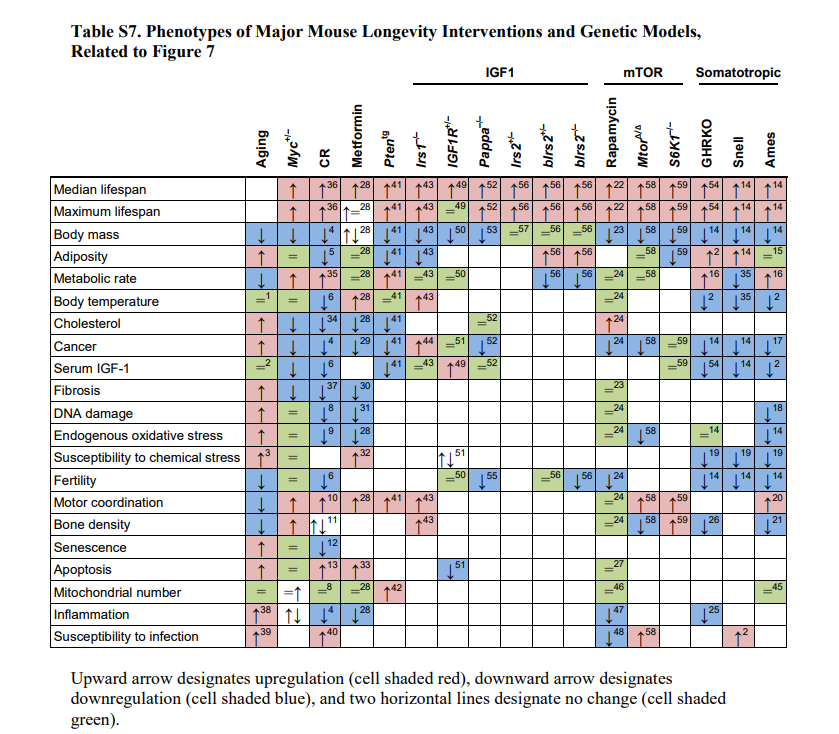 In the first column are the effects of aging. Then follow calorie restriction, metformin, rapamycin, as well as various gene mutations.

None of the interventions increase body mass, which is closely linked to insulin.

Only one of the interventions raised IGF-1, which is also closely linked to insulin. The one intervention which raised IGF-1 was a mutation in the IGF-1 receptor, so in that case there would still be low IGF-1 activity, since the receptor can’t respond as well.

On a side note, not also that none of the interventions increased fertility, which illustrates an evolutionary trade-off between growth and reproduction, on one hand, and longevity, on the other.

While there are other factors in aging, such as protein misfolding and glycation, amyloid production, etc., for the average person, insulin is arguably the most important.

Insulin is also connected to other major factors of aging: