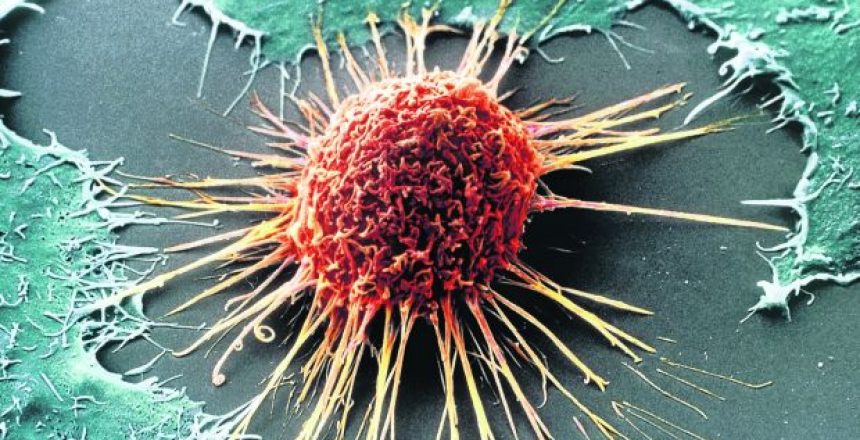 Many people, perhaps most, think that cancer is just something that strikes. That there’s little you can do about avoiding it – other than not smoking cigarettes. That is not the case, since there’s a link between insulin and cancer, and we can control insulin levels.

Associations between insulin and cancer

People who are in the highest quintile (fifth) of insulin levels have a 62% higher risk of dying from cancer, and a 161% risk of dying from gastrointestinal cancer. (Perseghin, Gianluca, et al. “Insulin resistance/hyperinsulinemia and cancer mortality: the Cremona study at the 15th year of follow-up.” Acta Diabetologica 49.6 (2012): 421-428. Link)

The above chart shows survival in terms of death from cancer in people in the top quintile (fifth) of fasting insulin, vs quintiles 1-4. You’re much more likely to die from cancer if you have high insulin. The association was even worse for GI cancer.

This doesn’t prove that high insulin causes cancer, but it’s quite suggestive. We know that obesity and diabetes are associated with higher cancer risk, and insulin may very well be why.

Laron dwarfism may provide some clues.

In people with Laron dwarfism or other forms of growth hormone or IGF-1 defects, none of the IGF-1 deficient people had cancer, whereas 9-24% of their relatives had a history of cancer. (Ref) This refers to deficiency of IGF-1, or insulin-like growth factor 1, not insulin itself, but the two are closely related, with a correlation between the two of 0.58 in obese people. (Ref)

Seems at least possible that if no insulin, then no cancer.

All of this evidence points in the direction of higher insulin increasing risk for cancer.

Ideally, we’d like to see an experiment in which lowering insulin, without doing anything else, means less cancer.

Such an experiment has now been done, in mice, for the first time. (Endogenous insulin contributes to pancreatic cancer development Anni MY Zhang, et al. bioRxiv 530097; Link)

Mice were genetically engineered to have lower insulin, and they had 50% fewer precancerous lesions in the pancreas. This is highly suggestive. Makes sense too, since insulin is a growth factor and cancer is runaway growth.

“Collectively, our data indicate that endogenous insulin hypersecretion contributes causally to pancreatic cancer development. This suggests a modest reduction in fasting insulin via lifestyle interventions or therapeutics may be useful in cancer prevention.”

Cancer cells require insulin, and they have a high density of insulin receptors, so they can get all their primary fuel, glucose, from the blood.

A high insulin and high cancer environment – ours

We live in a high insulin environment. Food that’s loaded with sugar and refined grains is everywhere, and in abundance.

More than 70% of Americans are overweight or obese, which means many of them have high insulin.

So, to lower your cancer risk overnight, lead a low insulin lifestyle.

You do that by avoiding ultra-processed foods, by exercising, and by practicing intermittent fasting.

And of course, getting or staying lean and muscular. (Although normal body fat and muscle percentage are different for women, the same applies to them too.)