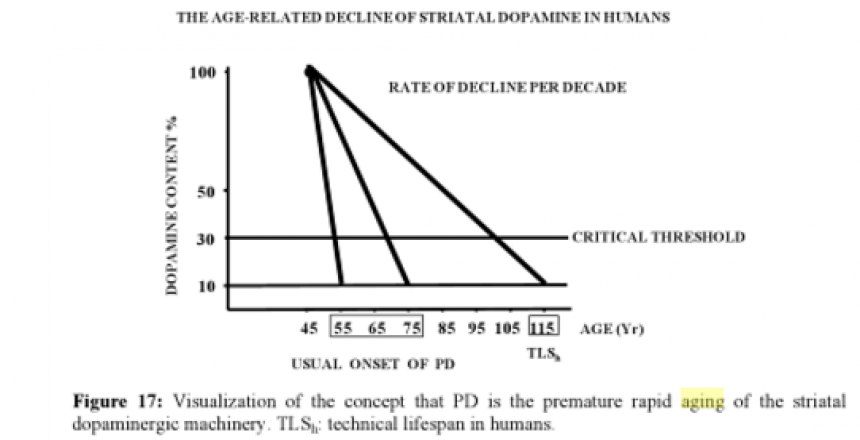 As I’ve written about extensively, accumulating iron looks like a very good candidate for the primary driver of aging. It follows that lowering iron or preventing its accumulation could substantially retard the aging process. Here, I’ll discuss iron’s crucial role in brain aging.

Parkinsons’ disease is a progressive brain disorder that affects movement. Its cause is the loss of neurons that produce dopamine in the substantia nigra, a region of the midbrain.

Parkinson’s, if not treated properly, can be fatal.

According to Joseph Knoll, the Hungarian discoverer of the drug selegiline (Deprenyl), which is used to treat Parkinson’s, humans lose 13% of their dopamine neurons per decade after the age of 45. (1)

Take a look at the following graph from Knoll: 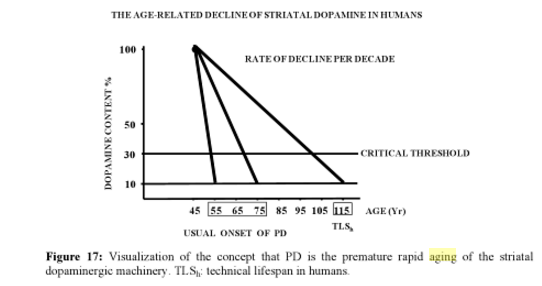 Deprenyl, the drug that Knoll discovered, both protects dopamine neurons from destruction and extends the lifespan of lab animals, which gives additional support to the idea that dopamine neurons set a limit on lifespan. In Knoll’s study on rats, those on Deprenyl lived 35% longer than controls. That’s huge, comparable to calorie restriction.

Interestingly, Deprenyl appears to work by hormesis.(2) “Average life spans of animals were significantly longer in male rats given 0.25 and 0.5 mg/kg/inj.; however, rats given a 1.0 mg/kg dose began dying earlier than control rats, leading to an inverse U-shaped dose–efficacy relationship, a hormesis.”

Deprenyl increases the levels of superoxide dismutase and catalase, which are detoxifying enzymes; this is a classic hormetic response.

There’s increasing evidence that accumulating iron in the brain causes Parkinson’s, as well as Alzheimer’s. (3) Iron chelators are seen as a promising therapy for both diseases.

If iron causes the destruction of dopamine neurons leading to Parkinson’s, and dopamine neurons decline in everyone (albeit at a lower rate), and this decline sets a limit to human life, it follows that the accumulation of iron may be (one of) the limiting factor(s) of human lifespan.

Importantly, it’s not the mere accumulation of iron that causes damage, but the inability of the body to sequester and rend that iron harmless. In other words, so-called “free iron” causes the destruction of neurons.

A decline of heme synthesis with age may have something to do with this. Since heme incorporates iron, less heme means that more iron is available in its free form.

Hormetic agents, such as certain phytochemicals like sulforaphane (from cruciferous vegetables), resveratrol, and EGCG (from green tea) up-regulate Phase 2 enzymes, a crucial detoxifying response. Interestingly, one of these phase 2 responses includes an increase in the iron-sequestering protein ferritin. (4)

By increasing levels of ferritin, hormetic agents cause a decrease in levels of free iron. Deprenyl acts by hormesis to extend lifespan, so it probably does this too.

Superoxide dismutase and catalase, the detoxifying enzymes that Deprenyl increases, detoxify free radicals and hydrogen peroxide, two substances that act to cause cellular and molecular damage.

Iron causes cellular and molecular damage by catalyzing, through the Fenton reaction, the production of free radicals and expecially the hydroxyl radical, one of the most destructive.

This gives us a clear mechanism through which iron destroys neurons, and through which hormetic agents, like Deprenyl and phytochemicals, rescue them.

What to do about iron accumulation

Whole blood donation is the best way to rid the body of excess iron, since about 70 to 80% of the body’s iron is stored in red blood cells. If someone’s iron is astronomically high, such as in the case of hemochromatosis, they will ordinarily undergo phlebotomy every couple of weeks until their iron levels get back to normal, and then have phlebotomy on a regular schedule as needed to keep those levels low.

For others, even one of two blood donations a year can keep iron levels in a safe range.

However, from what I’ve said above about free iron, the use of iron chelators and blood donation may not be mutually exclusive. Iron chelators target free iron, while blood donation targets total iron.  In making red blood cells to replace those lost from a blood donation, the body draws on free iron stores, thus reducing them. But some organs, such as the brain and muscle, may be more reluctant to part with their iron. (This is for physiological reasons, mainly the quantity of ferroportin, a specialized receptor that allows iron to exit cells.)

Therefore the use of iron chelators may be beneficial in addition to blood donation.

Also, just keeping in shape through regular hormetic activity, such as exercise, fasting, and the ingestion of phytochemicals could go some way toward reducing free iron through the production of ferritin.

Iron also seems to be a major factor in production of sarcopenia, or muscle wasting (5), and probably the anabolic resistance seen in old people, but that’s a story for another time.

PPS: Since I wrote this post, I’ve written an entire book about the role of iron in aging and disease: Dumping Iron.