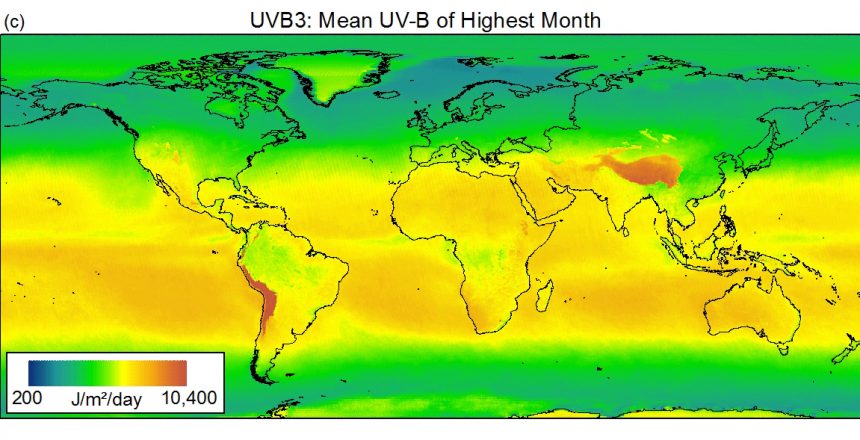 Radiation from the sun causes the production of vitamin D when it interacts with human skin, so there’s reason to think that getting sunshine is healthy.

Check out the following graph, which comes from a paper, “Skin cancer as a marker of sun exposure associates with myocardial infarction, hip fracture and death from any cause”.(1) Skin cancer is the result of many years of exposure to the sun.

If a person has skin cancer, his odds of getting a hip fracture, a heart attack, or dying from any cause drop dramatically.

Skin cancer (non-melanoma) cut the death rate nearly in half – odds ratio 0.52. That figure was substantially attenuated when adjusting for age and calendar year (to account for changes in cancer treatment), but still significantly lower for those who ever had skin cancer versus those who didn’t.

Way back in 1937, it was discovered that sailors in the United States Navy had about 8 times the rate of skin cancer as other men of the same age, but only about 40% of the rate of other cancers.(2)

While non-melanoma skin cancer is a readily treatable disease with a fatality rate of under 1%, and accounts for about 1% of all cancer fatalities, other cancers have a total fatality rate of around 50%. 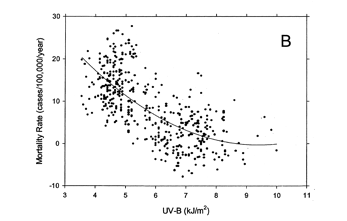 The “10” on the upper chart of cancer mortality vs UV-B radiation corresponds about to northern Chile on the map. The southwestern U.S. might be 7 or 8.

Finally, a recent study showed the power of sunlight: “Avoidance of sun exposure as a risk factor for major causes of death: a competing risk analysis of the Melanoma in Southern Sweden cohort”.(4) The study found that women with “active sun exposure habits” had a longer life expectancy, and that the degree to which sun helped their health was comparable to not smoking.

It might be thought that some or all of the results were confounded by socioeconomic factors; for instance, people who can afford sun-drenched vacations might have better health habits or genes, and this is the source of their better health. However, when the first study cited above on skin cancer and mortality was adjusted for level and length of education, which are proxies for IQ and income, the association between lower death rates and skin cancer barely budged. (See table.)

While the association between solar radiation and better health is likely due all or in part to vitamin D, solar radiation itself can’t be ruled out as causative, since low-level radiation is hormetic, meaning it’s a stress that causes the body to increase cellular defense mechanisms.

As with any form of hormesis, too much of the stress can be damaging. Therefore, moderate exposure is to be aimed for.

While moderate solar exposure improves health, sunburns should be avoided, as these are associated with skin cancer. Length of time that one should be exposed to the sun vary greatly according to time of day, season, and latitude, and also amount of clothing and skin color of the person. See this article at the Vitamin D Council for guidance on sun exposure.

PS: Lose fat by eating the foods that Nature intended you to eat, not those Big Food intends you to eat. The World’s Simplest Fat loss Plan.