Niacin as an anti-aging and life-extension drug 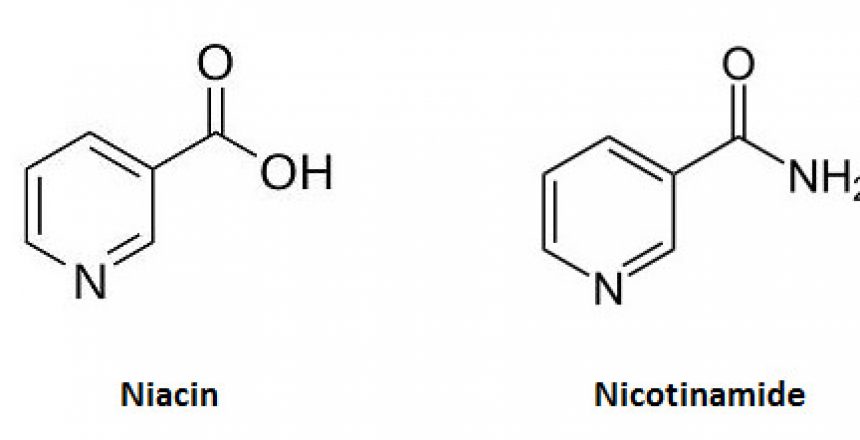 Vitamin B3 comes in two forms, niacin (also known as nicotinic acid; no relation to nicotine) and nicotinamide (niacinamide), and has been widely used in recent decades for the prevention of hyperlipidemia, and thus cardiovascular disease. (Note that niacin can cause skin flushing, a benign but slightly unpleasant effect; nicotinamide does not do this.) Niacin raises levels of HDL cholesterol and lowers LDL levels; meta-analyses have found that it significantly lowers the risk of cardiovascular disease, by about 25%. The lipid-lowering action of niacin leads directly to another of its effects, an increase in autophagy. Since autophagy declines with age, and animals that have been genetically engineered to have higher levels of autophagy live longer, niacin and nicotinamide have the potential to slow aging and prolong lifespan.

A niacin derivative called Acipimox was developed in Europe that would lower lipid levels but not produce flushing. (It’s not approved by the FDA for the U.S., so you can’t obtain it here.) Due to its action in lowering free fatty acids in the blood, Acipimox also lowers insulin levels by about 50% in obese patients literally overnight. Sounds almost like a miracle drug. Keep in mind that the only apparent difference between niacin and Acipimox is that the latter does not cause flushing.

Acipimox, like niacin, also promotes autophagy, which is probably linked with its insulin-lowering action. Insulin and IGF-1 tightly and negatively regulate autopahgy, so lowering insulin levels increases autophagy. In an experiment, rats were either fasted every other day, fasted once a week, fasted once a week and given Acipimox, or controls fed ad lib. As they aged, the control rats developed decreasing activation of autophagy, which declines with age, and increased levels of dolichol, which is a biomarker of aging. The animals that were fasted every other day, and those that were once weekly fasted and received Acipimox, showed none of the changes that aging ad lib fed animals did; the animals that fasted once weekly but without Acipimox had beneficial changes, but not as strongly. Therefore it seems clear that fasting once a week with Acipimox means the equivalent in health benefits as every other day fasting does, which is remarkable. In the words of the study:

It is concluded that life-long weekly-repeated transient inhibition of insulin secretion by antilipolytic drugs may have an anti-aging effect, additive to the anti-aging effect of a milder caloric restriction. Speculation is that transiently lower plasma insulin levels might stimulate the anti-aging cell-repair mechanism autophagy, which has longer lasting effects on cell housekeeping.

What we know so far is that the niacin derivative Acipimox essentially boosts the effects of intermittent fasting by raising autophagy levels and, in at least some aspects, inhibits aging. Now what we want to know is whether niacin or nicotinamide can do the same.

It’s been found that levels of NAD+, a key metabolite, decline with aging and that restoring NAD+ levels can have a profound anti-aging effect. I first became interested in nicotinamide several years ago when I read about this, and soon discovered that it raises NAD+ levels, and by doing so increases autophagy as well as preserves mitochondrial integrity. Mice that were engineered to be susceptible to Alzheimer’s had improved cognitive performance and suppressed Alzheimer’s pathology with several months treatment with nicotinamide.

In the present study we determined whether improving neuronal bioenergetics via provision of the nicotinamide (NAM) would enhance autophagy and ameliorate neuronal dysfunction and degeneration in experimental models of AD. NAM, an amide of vitamin B3, is the essential precursor of β-nicotinamide adenine dinucleotide (NAD+) in mammalian cells (Belenky et al., 2006). NAM is converted to NAD+ through the activity of nicotinamide phosphoribosyltransferase (NAMPT), a rate-limiting enzyme in NAD+ biosynthesis.

NAM [nicotinamide] moves rapidly (within minutes) across the blood-brain barrier by facilitated diffusion and is converted to NAD+…. We previously found that NAM preserves cellular NAD+ levels and improves cell survival under conditions of metabolic and excitotoxic stress in neurons and in a rodent model of stroke…. We show that the benefit of NAM in AD [Alzheimer’s disease] mice involves elevation of NAD+ levels and increased resistance of mitochondria to oxidative stress, and enhancement of the autophagy-lysosome process.

In Antiaging Therapy: A Novel Target for Antilipolytic Drugs, the authors state:

Functioning of autophagy may decline in well fed adults and is almost negligible at older age. Induction of autophagy may result in “cleaner cells” lower in oxidative status and more resistant to injury and disease. The administration of antilipolytic drugs to fasted animals was shown to intensify autophagy in a physiologically appropriate manner, to enhance submaximal antiaging effects of low level of caloric restriction, to rapidly rescue older cells from the accumulation of altered mtDNA and older peroxisomes, to increase urinary 8-OHdG levels, and counteract the age-related hypercholesterolemia in rodents. In conclusion, benefits of long-lasting stimulation of autophagy and protein and organelle turnover shows that antilipolytic drugs might find a novel therapeutic application in antiaging medicine.

While there’s likely a lot more to be discovered, niacin and nicotinamide look quite promising for anti-aging.

Update: I had some questions via comments and email about dose of nicotinamide (also called niacinamide so as not to scare the ignorant). At this point there’s a lot of guesswork, but I take  Carlson Niacinamide when fasting. It is similar to the dose of Acipimox that lowered insulin levels by half.