Non-Aspirin NSAIDS Can Cause Heart Attacks 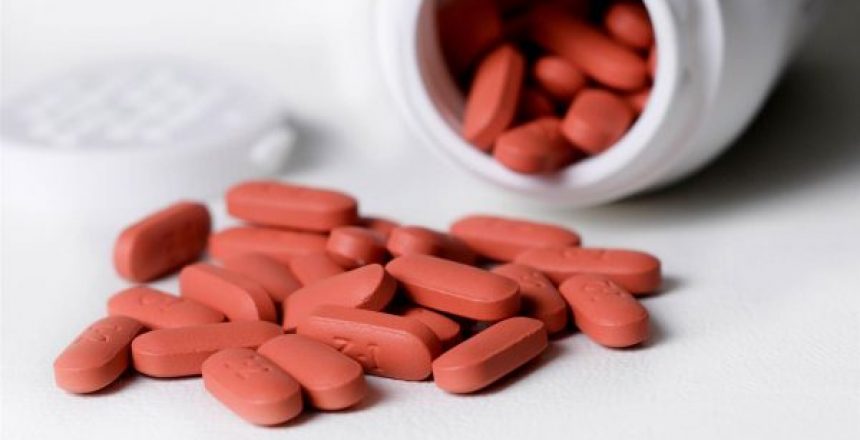 Not long ago, the FDA issued a warning that non-aspirin NSAIDs such as ibuprofen could cause heart attacks and strokes. Does this mean that we should never take these drugs, and how serious is the harm that they cause?

NSAID stands for non-steroidal anti-inflammatory drug. This group of drugs treats pain, fever, and inflammation, and includes ibuprofen, naproxen, diclofenac, and celecoxib. Aspirin is also an NSAID, but is not included in the FDA warning. Acetaminophen (Tylenol) is not an NSAID, although this drug has problems of its own, and is responsible for huge number of ER visits due to overdose.

The main evidence that these drugs cause heart attacks and strokes had come from epidemiological studies, but a meta-analysis of randomized controlled trials found the same link.

Celecoxib and related drugs increased the risk of a heart attack by 76%, and of all cardiovascular events by 37%.

All NSAIDs together approximately doubled the risk of heart failure.

Naproxen seemed to be relatively safe.

All NSAIDs greatly increased the risk of gastrointestinal complications such as bleeding and ulcers; for instance ibuprofen quadrupled the rate of GI complications. That’s ironic considering that one of the reasons these drugs are touted so much more than aspirin is because of aspirin’s ability to cause bleeding.

Noteworthy from the above is that these drugs can increase the risk of heart attack and stroke almost immediately, which means that even occasional use could increase risk. Many people, including myself, have been in the habit of taking an ibuprofen or other similar drug for minor aches and pains. I will no longer do this. If needed, I’m going to use aspirin.

NSAIDs decrease pain and inflammation by inhibiting cyclooxygenase, or COX, of which there are two variants, COX-1 and -2. The form that primarily but not exclusively affects pain is COX-2, while COX-1 is associated with GI side effects.

All NSAIDs affect both COX isoforms, but to different degrees. Ideally, a drug would affect only pain and have no adverse effects, but the search for such a drug has proved fruitless. The chart below (previous link) shows the relative degree to which each of these drugs inhibits COX-1 vs COX-2 at a given concentration. 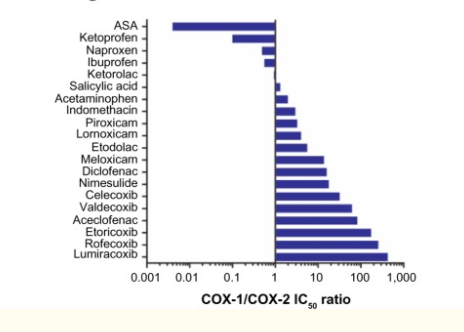 From this chart, it appears that the more a drug inhibits COX-2 without affecting COX-1, the more dangerous it is in terms of heart attack risk.

Note that aspirin, which prevents heart attacks, has the lowest ratio, meaning that it inhibits COX-1 much more strongly than COX-2.

One reason that aspirin prevents heart attacks may be because of unique metabolic products that it creates, resolvins, which are anti-inflammatory molecules produced from the omega-3 fatty acid DHA. Resolvins are potent regulators of immune function and appear to have many beneficial effects, for example against cancer, and infection.

Resolvins are protective against cardiovascular disease.

It’s been known since 1950, or at least suspected, that aspirin prevents heart attacks. In that year, Dr. Lawrence Craven, a general practitioner in Southern California, published the first report on aspirin and heart attacks.

In the midst of a heart disease epidemic that was cutting down millions of middle-aged men, the search for a preventative was urgent. Dr. Craven had noted that some of his patients who took aspirin had excessive bleeding during surgery, and he also thought that platelets were involved in heart attacks. (He was right.) So, putting those together, he urged hundreds of his middle-aged male patients to take aspirin, and a lot of it, a minimum of 2 standard aspirin tablets daily, or 650 mg.

Craven eventually treated over 1,500 male patients with daily aspirin, and reported than not one of them suffered a heart attack.

This of course was not very scientific, since there was no control group, and his sample of patients wasn’t necessarily representative of the wider population. Still, at a time when men were dropping like flies of heart attacks, his results were remarkable.

Craven experimented on himself to get a handle on how aspirin increased bleeding risk, and reported,

Ingestion of 12 aspirin tablets daily resulted after five days in spontaneous profuse nosebleed. In order to check on the reliability of this observation the test was repeated twice over, with precisely the same results. The proof seemed to be all the more convincing as the author had not experienced nosebleed for more than fifty years.

A study published last year in BMJ reaffirms the risk of heart attack with NSAID use.

All NSAIDs, including naproxen, were found to be associated with an increased risk of acute myocardial infarction. Risk of myocardial infarction with celecoxib was comparable to that of traditional NSAIDS and was lower than for rofecoxib. Risk was greatest during the first month of NSAID use and with higher doses.

Does this mean that taking a single dose on an NSAID could cause a heart attack? If you were at high enough risk, yes, probably. If you’re at low risk, even short-term use could increase risk, however.

With use for one to seven days the probability of increased myocardial infarction risk (posterior probability of odds ratio >1.0) was 92% for celecoxib, 97% for ibuprofen, and 99% for diclofenac, naproxen, and rofecoxib.

So, be careful with NSAIDs.