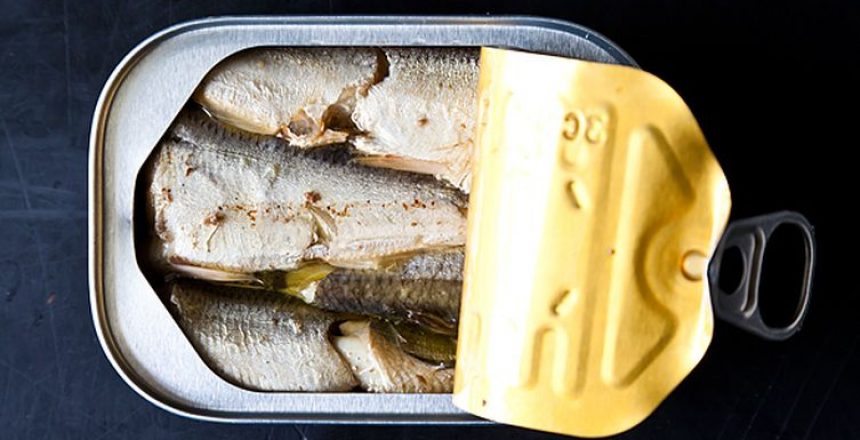 Omega-3 fatty acids, types of polyunsaturated fatty acids that are most abundant in fish and fish oil, have long been associated with lower risk and/or mortality from heart disease. Meta-analyses of supplementation trials have, however, been equivocal as to their benefit. In this article we’ll see whether it can be ascertained whether they have benefit or not, and whether and how omega-3 fatty acids improve health.

The modern theory that fish consumption, along with its abundant provision of omega-3 fatty acids, prevents heart disease comes from studies of Greenland Eskimos, who have a very low rate of heart disease and a very high consumption of fish and other marine animals. Below is a chart that shows tissue content of omega-3 and its relation with cardiovascular (CVD) mortality – coronary heart disease and stroke mainly. (Chart source.) The tissue compositions were calculated, not directly measured. 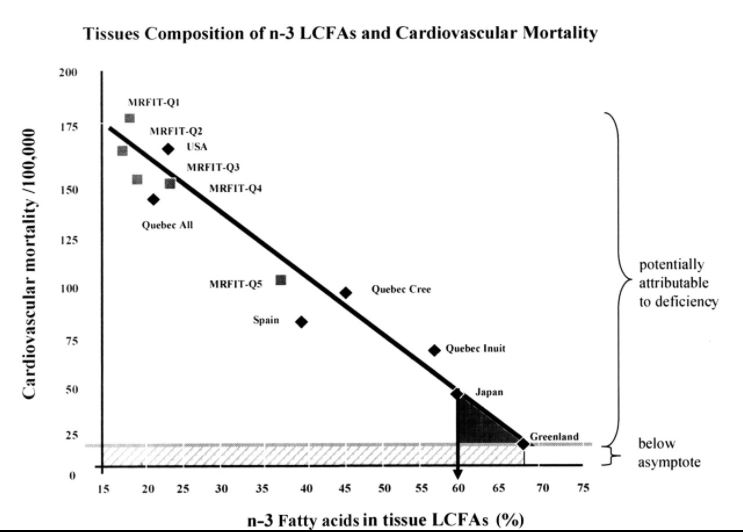 It can be seen that the relation between omega-3 tissue levels and cardiovascular mortality holds across many countries as well as within countries. Even in Japan, a country with generally high fish intake and low heart disease risk, increasing consumption of fish and omega-3 was associated with substantially reduced risk of heart disease, mainly non-fatal.

One wonders, however, what other factors could be at play. In Greenland, for example, at least at the time studied, one would expect that the inhabitants had a low intake of processed foods that contained sugar, refined flour, and vegetable (seed) oils.

Since these results were found, many trials have been done in which subjects were supplemented with fish oil and followed for heart disease and other clinical endpoints. Results have been mixed.

The GISSI-Prevenzione trial, carried out in Italy, gave one gram of omega-3 daily to people who had suffered a recent heart attack, and found an up to 20% decreased risk of death in those who took it, compared to no supplementation.

The Lyon Diet Heart Study used a “Mediterranean diet” as the intervention, part of which included the use of a margarine enriched in alpha linolenic acid, an omega-3 fatty acid. The subjects had also suffered a heart attack before placed on the intervention.  Subjects in that trial had a 50 to 70% lower risk of recurrent heart disease.

Meta-analyses have been mixed, however.

One meta-analysis found that supplementation with omega-3 fatty acids “reduces overall mortality, mortality due to myocardial infarction, and sudden death in patients with coronary heart disease”, with decreases of from 20 to 30%.

What could be going on to give such mixed results?

One possibility is that supplementation doesn’t increase the omega-3 index equally in all patients or all trials, due to issues of bioavailability and trial design. Since tissue composition of omega-3 is thought to be behind a decrease in CVD, just giving it to someone doesn’t guarantee a rise in the omega-3 index, which is a measure of omega-3 in red blood cells.

When actual blood levels of omega-3 fatty acids are measured in male physicians, large reductions in cardiac sudden death were found, as much as 90% reduction, even adjusted for confounding factors..

Another possibility, related to the first, is a high background intake of omega-6 fatty acids, which are abundant in seed oils, and which are consumed massively in most of the developed world. Far greater intake of omega-3 is necessary in someone with a high intake of omega-6 to raise tissue levels to one that reduces risk. It’s estimated that in the U.S., a “healthy dietary allowance” of DHA and EPA, the two main omega-3 fatty acids found in fish oil, could be reduced ten-fold if omega-6 consumption were greatly reduced also. The reason is that omega-6 and omega-3 fatty acids compete with each other for incorporation into body tissues, so the less there is of one, the less is needed of the other.

In all large interventional trials, no consideration was given to baseline omega-3 fatty acid levels. (See here.) In those with high initial levels, little to no effect of supplementation would be seen. Most were told to take capsules at breakfast, which for many is a low-fat meal, hindering absorption. This is similar to some studies on iron depletion, where initial and final ferritin levels are important, not the mere fact of phlebotomy. In omega-3 trials, the initial and final tissue levels are important, not the mere fact of supplementation. The intervention must actually do what it is designed to do.

In drug trials, only the intervention group gets the drug, but in trials of omega-3, both groups have a certain level of them in their tissues. Participants are recruited without considering baseline omega-3, and therefore there will be a substantial overlap in omega-3 tissue levels between the intervention and the control groups. In this way, randomized controlled trials are flawed when used in nutrition. 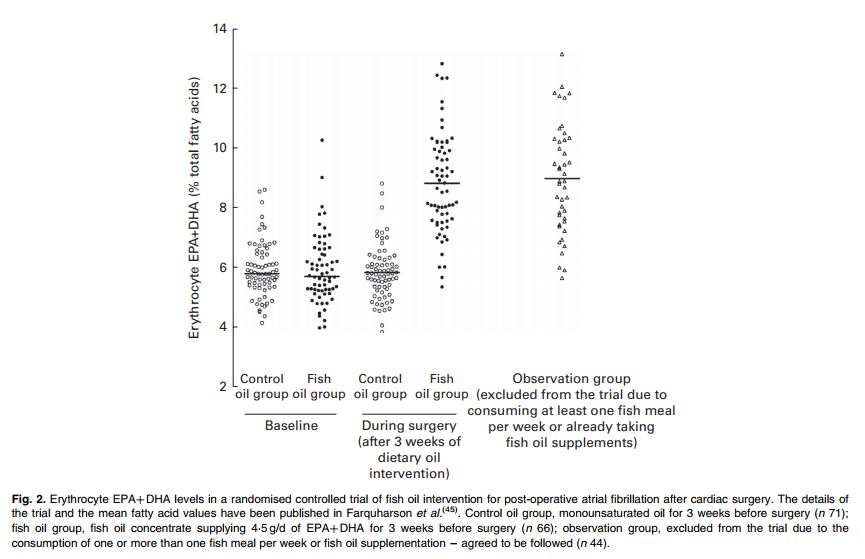 This paper also points out that by the year 2000, the fish oil genie was out of the bottle, as reports were appearing in the mainstream press about the benefits of fish oil, and many people started taking it. As it happens, trials conducted in the 1980s and 1990s had much better results than trials conducted after 2000, likely because the earlier trials were able to create a large difference in tissue omega-3 concentrations between intervention and control groups. After 2000, many more people ate fish or took fish oil, and differences between intervention and control groups may have been far less.

Statin use may be another confounding factor. A recent study found that statin use may mitigate the beneficial effects of omega-3 fatty acids. Since so many patients at risk for CVD take statins now, that could account for differing results in trials, depending on how many people in the trial were taking them, and how much statin use varied between intervention and control groups.

Yet another possibility is that the associations between fish consumption and less heart disease are real, but that something else in the fish wholly or partially causes less heart disease. Maybe protein, for example, or the particular amino acid composition of fish protein, or that fish displaces food that causes heart disease.

Making sense of it all

As we’ve seen, epidemiological evidence strongly supports both fish consumption and levels of tissue omega-3 as preventative of cardiovascular disease, but randomized trials have been equivocal.

In my view, the fact that tissue levels of omega-3 strongly support the preventative effect, then omega-3 fatty acids do indeed prevent CVD, possibly even in spectacular fashion.

But, a high background intake of omega-6 fatty acids from seed oils can negate the benefits of omega-3 consumption. If someone consumed a lot of processed food that was high in seed oils, or consumed them in some other fashion, they may get zero benefit from omega-3 supplementation.

With a low background level of omega-6 consumption, safe levels of omega-3 can be attained with only a tenth the amount of omega-3 as compared to with a relatively high background of omega-6.

Therefore, the best policy, as I’ve noted before, would appear to be to lower vegetable (seed) oil consumption as much as possible. That’s possibly even more important than supplementing with fish oil.  The key is to bring them into balance. If you consumed no added sources of omega-6, then consuming fish a couple of times a week may be enough.

I do take fish oil, but not daily, a teaspoon of cod liver oil a couple to three times a week. Each teaspoon provides about 1 gram of omega-3 fatty acids. I also strive to consume zero vegetable oils; I also minimize consumption of high omega-6 nuts, and chicken, which contains a relatively high amount.