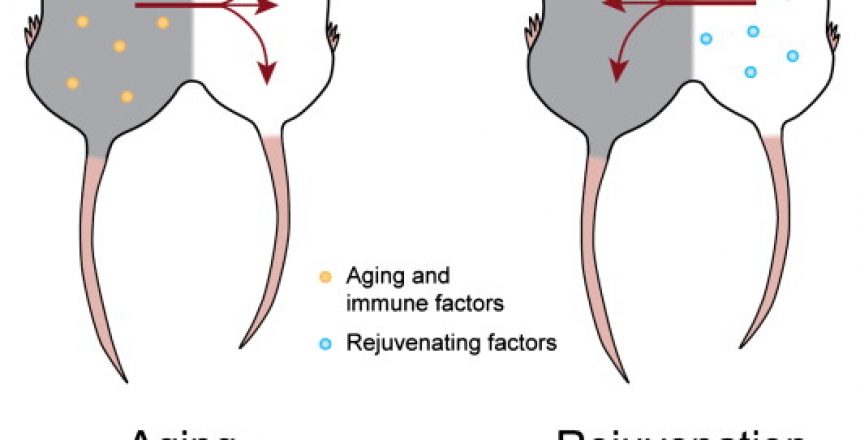 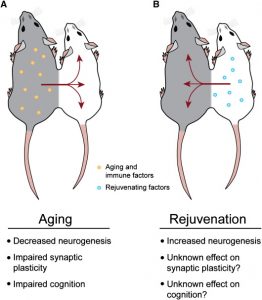 Parabiosis and transfusion of young blood have strong anti-aging effects

An article in The Journal of Immunology defines parabiosis:

Parabiosis is the surgical union of two organisms resulting in the development of a single, shared circulatory system. When animals of different ages are conjoined (i.e. heterochronic parabiosis), blood-borne factors from the younger animal can often beneficially affect the older animal and recapitulate the youthful phenotype & function in target tissues.

Parabiosis made a big splash last year when it was shown that parabiosis induced “vascular and neurogenic rejuvenation of the aging mouse brain by young systemic factors”. (Science.) Something in the young blood caused or allowed this rejuvenation.

Another celebrated study reported that “Young blood reverses age-related impairments in cognitive function and synaptic plasticity in mice”. (Nature Medicine.) This study did not use parabiosis, but plasma transfusions.

Initial reports have focused on the protein GDF11 as the causative factor, but more recent studies are skeptical of this, and show that GDF11 actually increases with age and inhibits skeletal muscle regeneration. (Cell Metabolism.)

Whatever the actual causative factor, it remains the case that something in young blood, probably a protein, rejuvenates old animals.

Creb activation is required for effects of parabiosis

If we look at the mechanistic effects of parabiosis and/or young blood transfusion, we find that Creb signaling is required for the rejuvenation of neural plasticity and growth. (Nature.) It could be very instructive to see what other interventions could also promote Creb signaling. These interventions could also cause rejuvenation in the same manner as young blood transfusion does.

Creb is a gene transcription factor that is responsible for the production of many neurotrophins, perhaps the most important of which is brain-derived neurotrophic factor, or BDNF. Creb is also involved in circadian rhythms.

Signal -> Creb activation -> Gene activation -> BDNF (or other neurotrophin) production. BDNF also feeds back and can in turn activate Creb.

If we can discover what types of signals either activate Creb, or result in the production of its downstream products, then these signals (interventions) could result in brain or even systemic rejuvenation.

Interventions that use the same mechanism as parabiosis, or how to replicate the anti-aging effects of parabiosis and young blood transfusion

It turns out that a diverse set of stimuli can activate Creb and/or stimulate the release of BDNF:

Omega-3 fatty acids: Omega-3 fatty acids, the active component that confers the benefits of fish oil, can raise BDNF levels (Journal of Neurotrauma), and depriving animals of them lowers levels of BDNF (Molecular Psychiatry). Omega-3 fats have well-known effects on synaptic plasticity and cognition, and raising BDNF is one of the means by which they do so.

Nicotine: Creb activation is required for the reward effects of nicotine (Neuron), which indicates that one of nicotine’s effects is to activate Creb.

Nicotine may protect against Parkinson’s disease, cognitive impairments, and is a nootropic. It also aids in weight loss. So, we already know that nicotine has salutary brain effects, and Creb activation may be the means by which it works. It appears that chronic nicotine exposure increases levels of BDNF. (Molecular Brain Research.) Activation of Creb by nicotine requires a dose that is typical of tobacco users, so this is fully achievable. (Molecular and Cellular Neuroscience.) Just a reminder: nicotine itself is a relatively benign compound, it’s the combustion products of tobacco that cause disease. In other words, it’s smoking, not nicotine, that causes health problems.

Nitric oxide: Nitric oxide appears to protect cells via Creb activation. (JBC.) This chemical also dilates blood vessels, which is the mechanism of action of the heart drug nitroglycerin, as well as that of Viagra. Yes, Viagra might be good for you.

There are a few ways to increase nitric oxide. One is hard exercise, whether weightlifting, HIT, or endurance training. Another is the supplement citrulline.

7,8-dihydroxyflavone: This natural compound is related to the flavonoids that are found abundantly in fruits, berries, chocolate, and so on. It appears to be one of the most powerful yet studied, and acts as  BDNF agonist, with “potent neurotrophic activities”. (PNAS) It potentiates memory and fights depression. One reason scientists are so excited about it is because, while BDNF has powerful benefits in cognition, brain injury, and the like, it cannot be taken orally, has a short half-life, and must be injected at the site needed, i.e. the brain; its clinical use is obviously limited. 7,8-dihydroxyflavone, on the other hand, can be taken orally, works by activating the same receptor BDNF activates, and appears to have about zero side effects. (You can buy 7,8-dihydroxyflavone at BlueBrainBoost, one of the very few places I’ve seen it.)

Exercise: Exercise robustly increases levels of BDNF. (ref) This is the mechanism of the increase in brain volume and better cognition that comes with exercise training.

So, we can see that a number of ways exist to imitate or replicate the effects of parabiosis or young blood transfusion, and these ways are all known to have health benefits. Creb signaling and/or BDNF upregulation are at least partly involved in their health effects, just as they are involbed in parabiosis. Until the day comes that one can regularly get transfused with plasma from young people, or until scientists figure out the exact causative factors in parabiosis, these methods offer a way to combat aging.

It could very well be that parabiosis/young blood transfusion isn’t quite the miracle that it’s made out to be, and the reason I say that is because all the measures that I’ve outlined above have health benefits and seem to work through mechanisms similar to those of parabiosis. Instead of waiting around for the allegedly miraculous effects of parabiosis, you could exercise, take omega-3 and citrulline and 7,8-dihydroxyflavone, and maybe indulge in a little nicotine, and perhaps gain the same health benefits as one would from parabiosis.