The End of Cancer? 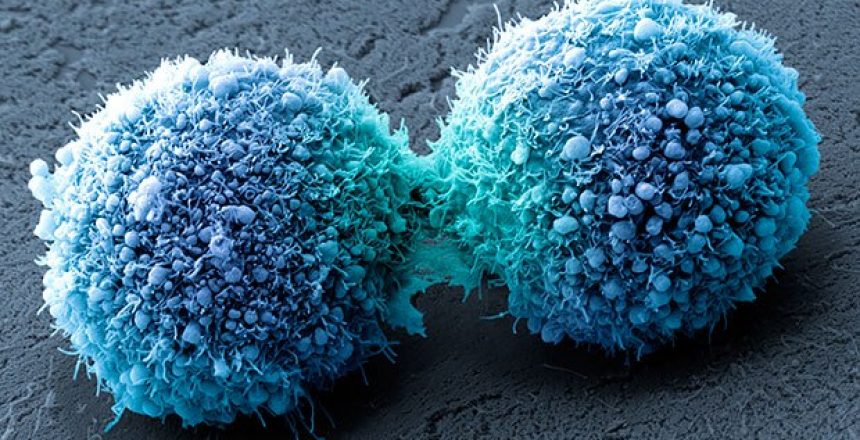 Cancer is the second leading cause of death in the U.S., and is one of the most dreaded diseases anywhere.

It typically strikes older people more; some 90% of cancer is diagnosed in people over the age of 50, and incidence increases with age. Could we be looking at the end of cancer?

While many of the causes of cancer have been identified, the exact manner in which cancer starts and why it does so remains an open question in science. While the lay person may consider the origin of cancer to be of academic interest only, the way that cancer starts, and even precisely what cancer is, has great relevance to prevention and treatment. A new line of thought on cancer has emerged in recent years, backed by compelling evidence, that the prevalent theory of how cancer starts and what it is are wrong, at least in part.

This new way of looking at the problem is the metabolic theory of cancer.

Is cancer caused by genetic mutations?

The prevailing theory of cancer is that it’s caused by genetic mutations, which lead to uncontrolled growth, metastasis, and death. The Mayo Clinic flatly states, “Cancer is caused by changes (mutations) to the DNA within cells.” A scholarly review, The Hallmarks of Cancer, argues that the “enabling characteristic” for these hallmarks of cancer is “genome instability”, that is, the increased propensity of the cell’s genes to mutate.

But seemingly, there’s a paradoxically low rate of mutations together with a high rate of cancer. Even the authors of the review cited above state:

But mutation of specific genes is an inefficient process, reflecting the unceasing, fastidious maintenance of genomic integrity by a complex array of DNA monitoring and repair enzymes. These genome maintenance teams strive to ensure that DNA sequence information remains pristine… Yet cancers do appear at substantial frequency in the human population, causing some to argue that the genomes of tumor cells must acquire increased mutability in order for the process of tumor progression to reach completion in several decades time.

Mutations are rare, they say, because cells strive to repair their DNA, but cancer occurs frequently.

There are a number of other paradoxes of cancer.

The discovery that cancer cells collectively manifest millions of different types of gene mutations led to the idea that all cancers were different, or different in type, and required complex treatment.

But what if cancer cells all had a remarkable similarity, one that had nothing to do with genetic mutations?

Otto Warburg, who won the Nobel Prize for Physiology or Medicine in 1931, first proposed that cancer is due to a metabolic defect.

In most normal cells, energy is burned in the mitochondria in the presence of oxygen to produce ATP, the currency of energy. Cancer cells have a severely diminished, or no, capacity to do this. Instead, they burn glucose for energy in a process known as aerobic glycolysis. The mitochondria of cancer cells appear to be severely damaged, so the only way they can obtain energy is through this alternative and relatively inefficient method.

Cancer cells burn glucose, as opposed to the mixture of fat and glucose burned by normal cells. Furthermore, non-cancerous normal cells can use ketone bodies for energy, and most cancer cells cannot.

Cancer as a metabolic disease

If genetic mutations don’t cause cancer, what does?

Thomas Seyfried, the most well-known scientist in this area, postulates that cancer is a metabolic disease.

Cancer cells burn sugar as a result of their dysfunction.

Therefore, treatment partially consists of depriving cancer cells of glucose. One way to do that is to lower blood glucose levels by the ketogenic diet. In fact, Seyfried has advocated just this approach. It appears to be effective, though much more clinical research would need to be done.

2-deoxyglucose, a compound that is taken up by cells but which cannot be metabolized, and which essentially jams up the metabolic machinery, inhibits cancer cells in vitro. So it appears that depriving cancer cells of glucose, their main fuel, inhibits their growth and may kill them.

Is there any other way to jam the molecular machinery of cancer cells?

Enter Dr. Laurent Schwartz, French physician and oncologist, who has been working on this problem for many years and treats patients using the metabolic theory of cancer. (In addition to conventional treatment.)

Schwartz and colleagues have developed a compound called Metabloc, which consists of two over-the-counter (in the U.S. at least) supplements, hydroxycitrate and alpha lipoic acid. These two compounds interfere with the metabolism of cancer cells, but have little effect on the metabolism of normal cells.  Below is a chart showing various strengths of both compounds either alone or in combination against cancer cells in vitro. The highest concentrations of the combination, though still in the micromolar range, reduced cancer cell viability to zero, i.e. no surviving cells. 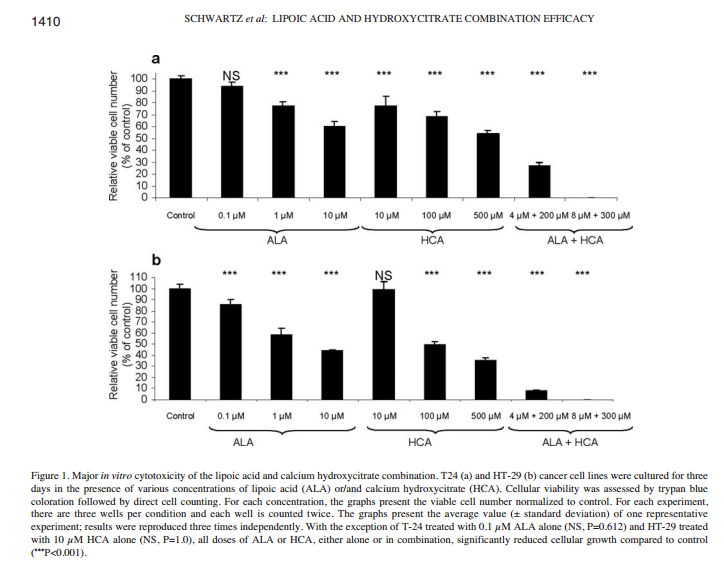 This treatment, in contrast to standard cancer treatment, is non-toxic, with few side effects.

Schwartz has published several papers on the effects in actual patients; the most recent (as far as I know) is “Combination of Metabolic Treatment of Aggressive Primary Brain Tumour and Multiple Metastases of the Brain”.

Background: The combination of hydroxycitrate and lipoic acid has been demonstrated by several laboratories to be effective in reducing murine cancer growth. In previous article in 2014, we reported the fate of 11 patients treated for metastatic cancer unresponsive to chemotherapy. As of today, 32 months after inclusion, five of these patients (45%) are still alive.

Patients and Methods: We report the cases of 12 patients with advanced brain tumor. They were all treated with conventional treatment and a combination of sodium R lipoate (800 mg bid), hydroxycitrate at 500 mg tid and low-dose naltrexone at 5 mg at bedtime. Eight patients had primary brain tumour (n=8 including five glioblastomas) four patients had multiple brain metastases.

The conclusion of the paper states:

To our knowledge, this is the first attempt to treat cancer using a combination of molecules targeting abnormal cancer metabolism. None of these patients experienced major side effects of metabolic treatment. At this stage of development, not a single case proves the efficacy of treatment. But at the time of writing, most patients were alive and well several months after having been sent home to await their death. Several months of life without symptoms strongly suggests that targeting cancer metabolism may be a reasonable option in therapy of advanced brain cancer. The role of metabolic treatment and its association with existing therapy remains to be explored in well-conducted trials.

The end of cancer?

It’s obviously too soon to say whether this new treatment for cancer will be so much of a success that the treatment becomes widely accepted and used. Apparently, Dr. Schwartz is the only oncologist in the world who is using it. His new book is “Cancer: Un Traitement Simple et Non Toxique.”

The number of cancers is increasing and, despite what we hear about medical progress, mortality has not dropped since 1960 , especially for tumors of the pancreas, lungs, liver, brain …

And if, instead of merely seeking to destroy cancer cells with aggressive treatments, they were also rendered functional again? This approach can improve the effectiveness of chemotherapy and the survival of patients.

This is the conviction of Dr. Laurent Schwartz, shared by many scientists around the world. This brilliant physician and researcher in cancer has spent his career gathering evidence that the mechanisms that cause cells to multiply in an anarchic way are essentially related to a sugar burning problem .

In this book written for patients and caregivers, he proposes to normalize the metabolism of cancer cells by a combination of non-toxic and inexpensive foods and supplements, or even a diet low in carbohydrates.

This metabolic treatment has already benefited many patients.

I can only say that if I had cancer, I would definitely seek out the expertise of Laurent Schwartz. He appears to be little known in the U.S., but his latest book will be translated into English and published here. It’s also being translated into Spanish and Italian.

While Dr. Schwartz has patented Metabloc, the fact that it’s comprised of two OTC supplements means it’s cheap and that huge pharmaceutical industry profits can’t be made on this treatment. That’s an obstacle to it becoming more widely adopted, since cancer treatment is big business.

PS: If you liked this article or my website in general, check out my books, Dumping Iron, Muscle Up, and Stop the Clock.