The Rise and Fall of Heart Attacks 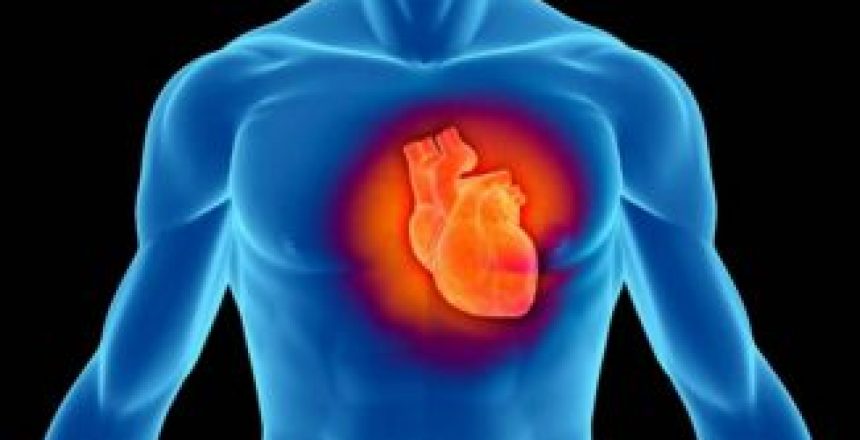 Rise and Fall of Heart Attacks

Dr. David Grimes wrote: “Few people are aware that coronary heart disease (CHD) has been an epidemic of the latter half of the 20th century. It is now almost over.”

He put together the following chart showing the rise and fall of deaths from coronary heart disease. As can be seen, heart disease deaths were nil in 1910, rose to a peak about 1970, and have declined dramatically since then.

It’s important to note that these are age-standardized rates, which compare different populations after adjusting for age. Absolute (crude) mortality rates are still high, but this is more of a function of the older age of our current population.

I sought statistics that would corroborate Dr. Grimes’ numbers, and found some: Decline in Cardiovascular Mortality (2017), published in the journal Circulation Research. The article contains the following chart, and the numbers are similar to those reported by Grimes.

Deaths from cardiovascular disease in men only have fallen massively.

Here’s a graph showing the rise and fall of heart disease deaths from 1900 to 2010. (Source.) These statistics are not age-adjusted. 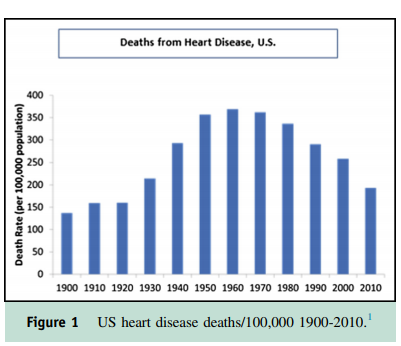 One such factor is cigarettes.

Annual per capita cigarette consumption in the U.S. in 1900 was 54 cigarettes. (Source.) Machine-manufacturing caused the price of cigarettes to drop, and per capita consumption rose dramatically to over 4000 by 1965, and currently stands at about 1000. Less than 5% of Americans smoked cigarettes in 1900, while 42% were smokers in 1965. (Source.)

Cigarettes are a well-known cause of heart disease.

People have of course been smoking or otherwise using tobacco for hundreds of years in the Western world. But cigarettes are a uniquely damaging form of tobacco use, because their smoke is inhaled into the lungs.

Most pipe and cigar smokers do not inhale, so they have a lower risk of causing heart disease, and smokeless tobacco produces no combustion products.

The culprit is not nicotine, but the chemical stew of thousands of toxic chemicals that forms when tobacco is ignited.

Hydrogenation is the process of chemically modifying unsaturated fats to make them saturated. Margarine and shortening are made this way.

Crisco, the first shortening made from vegetable (seed) oil, was introduced in 1911.

While coronary heart disease had been noted at autopsy in the 18th and 19th centuries, it was not until the 20th century that heart attacks could be diagnosed in the living. It was in 1912 that the first diagnosis of a heart attack in a living person was made.

By the 1920s, the coronary heart disease epidemic had begun. The passage below is from Dr. David Grimes.

The important 1963 review by Dr Maurice Campbell of Guy’s Hospital took data from the Registrar-General’s Statistical Reviews of England and Wales, acknowledging advice from Sir Austin Bradford Hill, and it gives us a great insight into the emergence of CHD. He felt that from 1876 (the earliest public records) until 1921 the death rate from diseases of the heart in general changed very little, and there was no specific mention of CHD. However, the death rate from diseases of the heart started to increase during the years 1922–24 and this would appear to have been the onset of the epidemic. The death rate from CHD in England and Wales increased from 2.9/100 000 in 1921 to 16.6/100 000 in 1931. The recorded deaths from cerebrovascular disease also increased, fewer but by the same factor as CHD. Campbell commented about the increase of CHD deaths after 1921 that ‘the death rate had doubled by 1927, doubled again by 1929, again by 1933, again by 1939, again by 1948, and again for the sixth time by 1956’.

Even mainstream medicine recognizes that trans fats are connected to coronary heart disease.

Besides hydrogenated seed oils, regular liquid seed oil use became commonplace in the 20th century. Soybean oil use per capita rose more than 1000-fold from 1900 to 1999. Use of vegetable (seed) oils raises the risk of heart disease. 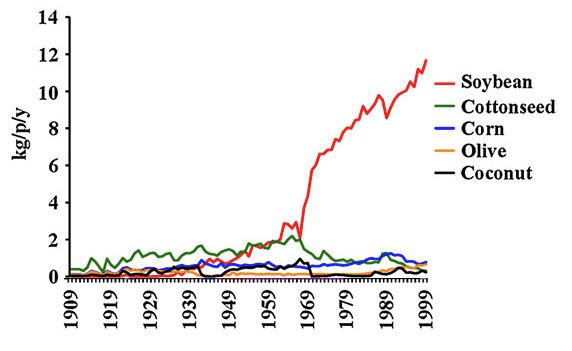 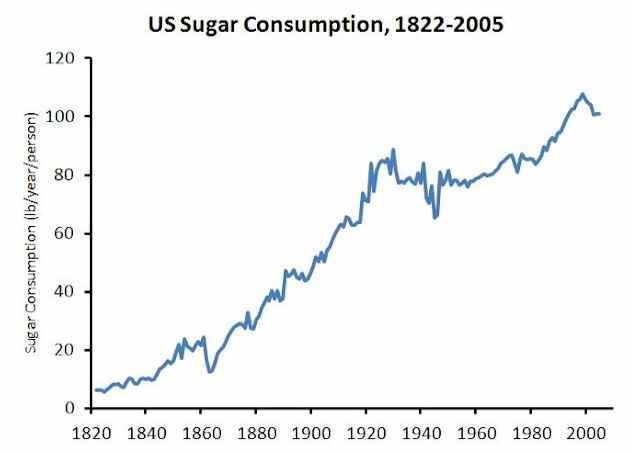 The decline of heart disease

We also saw from the above charts that heart disease has greatly declined since about 1970. Most of the decline is due to reduced rates of sudden cardiac death, the classic drop-dead of a heart attack scenario.

The reasons for the decline could be many.

An article on this topic suggests the decline of smoking rates, lower cholesterol levels, as well as better prevention, such as statins and aspirin. I’d add use of fish oil, and more health consciousness, including regular exercise.

Heart attack rates were declining before statins came on the scene.

However, aspirin use against heart disease has been known since around 1940, so that might be a factor. Widespread use of aspirin to protect against heart attacks began in the 1980s.

Deaths from coronary heart disease rose and declined dramatically in the 20th century.

My candidates for the cause of its rise are cigarettes, seed oils, and sugar.

Meat didn’t have anything to do with it.

The heart disease epidemic of the 20th century shortened the lives of millions, particularly men.