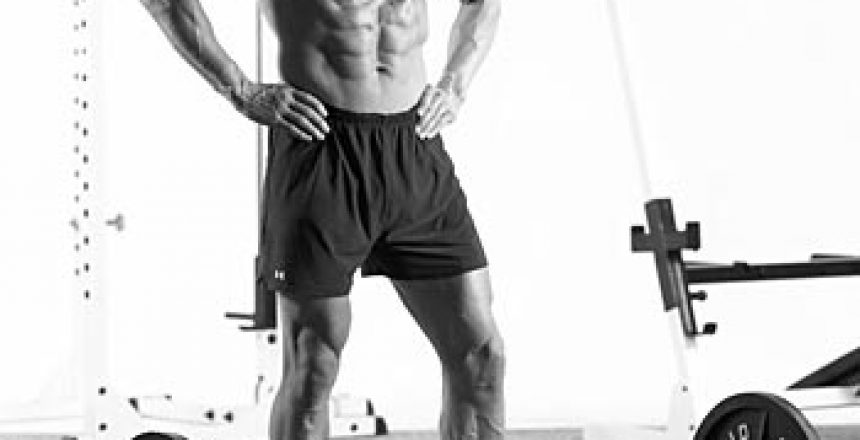 It’s often assumed that exercise prevents cancer because those who exercise are in better physical condition, and that seems at least partially correct. For instance, obesity is associated with cancer, and if exercise helps to prevent obesity, then it would prevent cancer too. But science shows that acute bouts of exercise can inhibit the growth of cancer cells.

A remarkable study looked at how blood serum taken from men post-exercise dramatically inhibited the growth of cancer cells.

The experiment took 23 young men, average age 22, and had them do a bout of high-intensity cycling, 6 1-minute intervals at 90% max, with 1-minute rest intervals in-between. They had blood drawn before the bout, and then at 5 minutes, 1 hour, and 24 hours post exercise. The blood was centrifuged and the serum (liquid part) was placed into media that contained cancer cells, which were different types of non-small cell lung cancer cells. Controls were cells grown in their usual media, without human serum added. The cells were allowed to grow for 7 days, and then counted. Chart below shows the results. 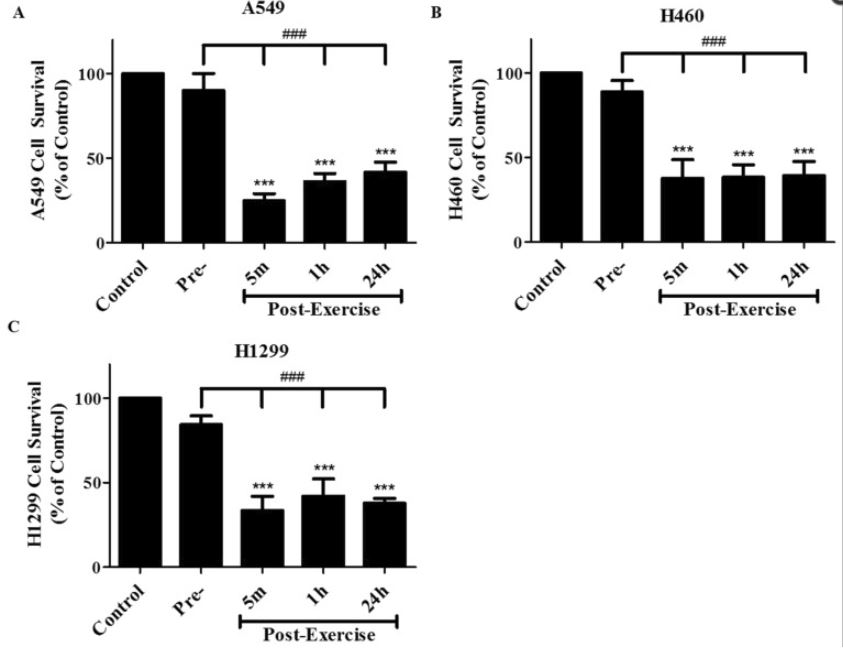 Why does this happen? One possibility is lack of growth factors. Insulin was not a factor, since they found no difference in insulin between pre- and post-exercise specimens, but IGF-1 (insulin-like growth factor 1) was different, so that may be the answer.

There’s also evidence that can let us speculate that weight lifting might be superior in this regard (as I’ve long maintained), because molecules secreted by exercising muscle, called myokines, may be involved in suppression of cancer growth.

This isn’t the only study that has found such an effect.

Animals fed a high-fat diet – which we know usually consists of large amounts of seed oils and sugar – become obese, with large amounts of adipose (fat) tissue, and extracts of this tissue placed in a medium growing cancer cells increases the proliferation of those cancer cells.

Physical activity can completely abolish this effect of high-fat diets on cancer proliferation.

We hypothesized that voluntary physical activity (PA) would counteract the deleterious adipose-dependent growth microenvironment to which a breast cancer is exposed. We show that PA altered the adipokine secretion profile of adipose in a volume-dependent manner. This alteration resulted in growth inhibition of estrogen receptor positive breast cancer cells in culture. Furthermore, stabilizing adiponectin receptor 1 expression in the cancer cells made them resistant to the cell cycle entry effects that accompany obesity.

Systemic changes to a 2 h exercise session reduced breast cancer viability, while adaptations to 6 months of training had no impact. Our data question the prevailing dogma that training-dependent baseline reductions in risk factors mediate the protective effect of exercise on breast cancer. Instead, we propose that the cancer protection is driven by accumulative effects of repeated acute exercise responses.

So cancer prevention is not (entirely) a matter of your level of physical fitness, but a matter of how intensely and often you exercise.

In animals (mice) that were implanted with tumor cells, voluntary running reduced tumor growth by over 60%. The researchers believe that exercise mobilized natural killer (NK) cells, which attack cancer.

Together, these results link exercise, epinephrine, and IL-6 to NK cell mobilization and redistribution, and ultimately to control of tumor growth.

This result suggests that exercise might actually attack cancer cells in people who already have cancer.

Every time you do a bout of high-intensity exercise, you flood your bloodstream with anti-cancer molecules, or remove molecules that promote cancer growth.

One substance that’s been overlooked by researchers doing these experiments is iron, and cancer feeds on iron. Exercise that is intense enough and protracted enough can cause iron deficiency. If someone exercises intensely and regularly, he would likely be depriving any incipient cancer cells of the iron they need to grow.

There’s a widespread belief that cancer just happens, and that, except for not smoking, there’s not a lot you can do about it. Nothing could be further from the truth; there are many ways to prevent cancer.

You can add exercise to the list of cancer prevention interventions. 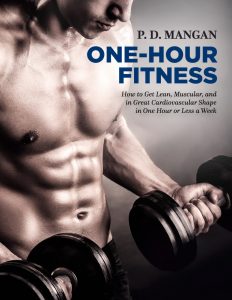