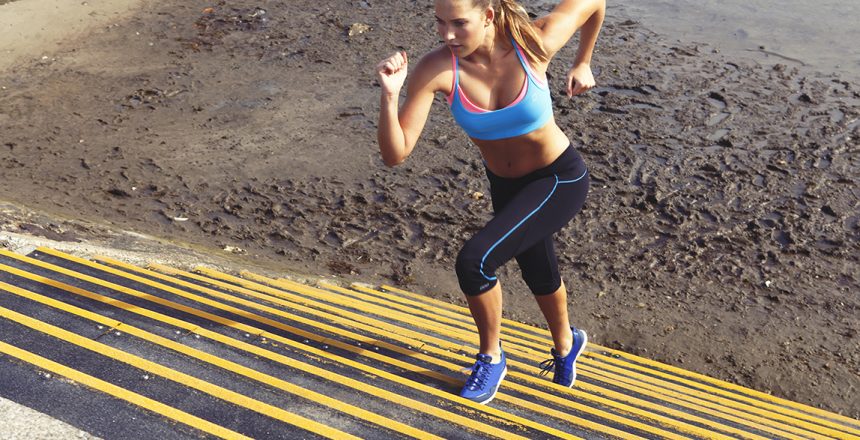 Ever since Dr. Kenneth Cooper introduced the concept of aerobics, we’ve been conditioned to believe that steady-state exercise at a moderate pace is the best, perhaps only, way to increase cardiorespiratory fitness. Jogging, treadmills, and the like, done for 30 minutes or more at a time, have been deemed best. So, lots of people have spent countless hours doing these things, but it increasingly looks like they spent lots more time than they need have. The question is, why are you still jogging?

High-intensity interval training is better than aerobics, and much faster than jogging or other aerobic exercise. It’s simply more efficient.

High-intensity interval training (I wrote about it here), abbreviated HIIT (or HIT), uses the intensity of exercise as the most important variable. Instead of steady-state, moderate-intensity exercise, HIIT has you going all-out for brief periods of time, followed by a short rest period, then another brief, all-out bout, and so on. While the exercise done in HIIT is much more intense, it’s also much shorter in time.

It’s been known for some time that HIIT is effective at increasing fitness, but what we would like to know is how it compares to moderate-intensity, steady-state exercise in that regard. Does it increase fitness as much?

To answer that, a group led by Martin Gibala, the exercise physiologist whose name has become linked to high-intensity exercise, studied a group of young, sedentary men.

Half the men did sprint-cycle interval training, consisting of three 20-second all out bouts of stationary cycling, interspersed with two minutes of low-intensity cycling.

Half the men did moderate-intensity cycling at 70% of their maximum heart rate, for 45 minutes.

Both groups worked out 3 times a week for 12 weeks.

According to standard exercise dogma, the moderate-intensity cyclists should have improved their fitness more. After all, they were doing aerobics (“cardio”), the HIIT exercisers were doing mainly anaerobic training, and took a lot less time.

The number one reason people give for not exercising is lack of time. This study shows that in less than 30 minutes a week, you can get in great shape. The aerobic, moderate-intensity group spent 2.5 hours a week to get the same results.

If you make your warm-up and cool-down periods shorter, as well as the intervals between bouts, you could get in shape in probably 15 minutes a week.

High-intensity interval training is intense. You have to give it everything you’ve got in those 3, 20 second intervals. For that reason, some people find it unpleasant.

Personally, I don’t find it unpleasant at all. However, I do enjoy walking as a form of low-intensity exercise. if you want to, you could certainly do both. Just keep in mind that if you do both, walking doesn’t generate the kind of intensity that increases the 3 indices of fitness: peak oxygen uptake, insulin sensitivity, and muscle mitochondria. You need to get over a threshold of intensity before that happens.

This study, along with others of a similar nature, shows you don’t need long hours of exercise to increase cardiorespiratory fitness. I think it also shows that, just as with lifting weights, intensity is the most important exercise variable.

Exercise intensity lies on a continuum, from low (walking) to middle (jogging) to high (high-intensity intervals). Getting more fit depends on exceeding an intensity that makes your body work harder than it’s used to.

If you exercise with low to medium intensity, and become fitter, the only ways to increase your fitness are a) increase the amount of time exercising, or b) increase the intensity. Most people choose an increase in time, and some who want to get very fit end up spending hours and hours a week exercising. That’s not necessary. In HIIT, you are always working at the threshold of your physiological ability. So long as you exert the utmost effort when you do it, you will always be getting fitter without an increase in exercise time.

If you do another form of exercise, such as lifting weights, you should be aware that if you combine it with HIIT, it could be easy to get into a state of overtraining. I can attest to this myself. HIIT workouts ideally ought to be treated as a separate workout, separated from another by at least a day. Too much exercise isn’t healthy and your enjoyment of the rest of your life will decline due to fatigue. Of course, the amount of training an individual can handle varies based on age, current condition, diet, sleep, and other factors.

The exercise of the future?

Ever since the concept of aerobics came about, we’ve been stuck in a paradigm that the only way to increase fitness and decrease the risk of disease, especially heart disease, is to exercise aerobically. Is it a coincidence that the rise of aerobics coincides with the rise of the obesity epidemic? I don’t think it is a coincidence, although obviously other factors are involved.

Now that we know that long hours of plodding are not necessary for fitness and for protection against heart attacks, HIIT could be the wave of the future.

I’ve already embraced it thoroughly – and I used to be a distance runner.

PS: For more on exercise and health, see my books Muscle Up, and Stop the Clock.