How Strong Are You? 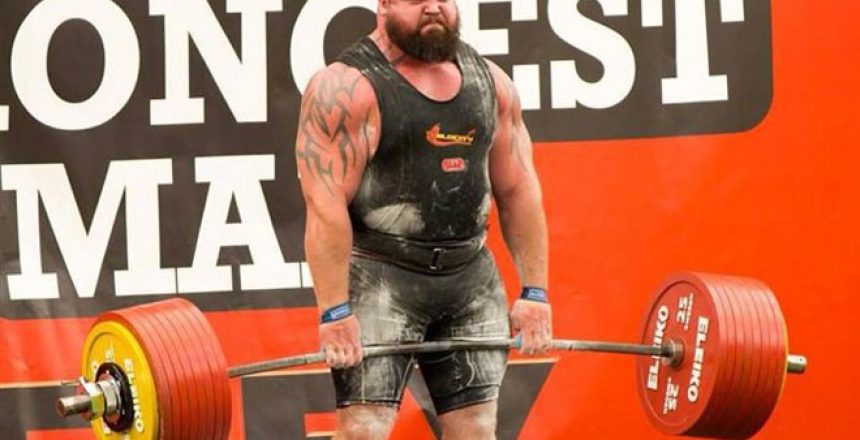 How strong are you? – A Guide

This deadlift been a long time coming for me, both in training to get the needed strength, and in overcoming a fear of injuring myself. Fear of injuring one’s back prevents most people from even attempting the deadlift, although that fear is way overdone, since there’s no reason you can’t start with a light weight – even with an unloaded bar, which weighs 45 pounds (20 kg).

Nevertheless, attempting heavy deadlifts should only be done by experienced lifters who know what they’re doing and use excellent form in the move.

A personal record (PR) is one thing, but how does it compare to others? I doubt I’ll ever be any sort of first class competitive weightlifter, but it would be nice to know where I stand in the way of strength – whether I’m strong for my age, whether I need more work, whether my PR was a mediocre weight, etc.

Fortunately, we have some guidance in this matter from Lon Kilgore, PhD, whose doctorate is in anatomy and physiology and who has coached and competed in weightlifting since the early 1970s. He has written numerous books, and among them he co-authored, along with Mark Rippetoe, the first two editions of Starting Strength, the best-selling book on weight training. (The 3rd and most popular edition is Rippetoe’s alone.)

Kilgore has developed a set of strength standards for the basic lifts, which we’ll take a look at.

The basic lifts for which standards are given include the deadlift, the squat, the bench press, and the (overhead) press, as well as for a couple of Olympic lifts, the power clean and power snatch. (Bodybuilders seldom do Olympic-style moves, which require high skill and extensive training, so we’ll be omitting those.)

The categories of strength standards are for untrained, novice, intermediate, advanced, and elite.

At my first glance at these charts, I was somewhat baffled as to how Kilgore determined his categories. Seemed a bit arbitrary. But on closer scrutiny, it turns out that he based his divisions on the normal distribution of strength, as in the following graph:

The immediate discrepancy I see with this normal distribution is that far more than 2% of the population is untrained – the real figure must be more like 95%, if we count everyone who never lifts any weights at all.

Therefore, the normal distribution seems much closer to the population that already lifts weights. An elite lifter isn’t in the top 2% of strength for the population, but more like the top .1% (2% of 5%).

So when you look at how much you can lift for each of these moves, you might consider the comparison population to be everyone who’s in your gym lifting weights. Maybe not exactly right, but seems reasonably close.

How do my deadlift results compare to the run-of-the-mill gym rat’s? Check out the following, which I snipped from one of Dr. Kilgore’s charts, showing deadlift standards for men, by age and category. 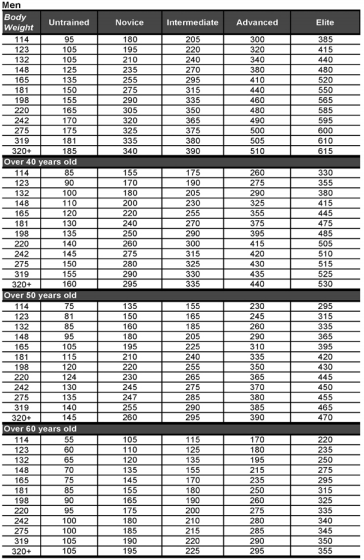 Since I’m over 60 years old, weigh around 165, and can deadlift 320, I’m allegedly an elite lifter for the deadlift. However, I’m going to take this with a large grain of salt.

One reason for the grain of salt is that I’m not much over 60, and that over 60 category runs all the way up to advanced old age and death. If I can’t lift more than an 85-year-old, then I’m in trouble.

Another reason is Dr. Kilgore’s statement, “Adjustments for the inevitability of aging are included.” To me, that statement means that there’s only so much you can do to stem the tides of aging. This is partially true, but on this site, we teach maximum-strength anti-aging.

There’s lots about aging that isn’t at all inevitable, and for most people, much of aging amounts merely to letting themselves go to pieces: no exercise, overweight, poor diet, and many other bad health habits.

Using the powers of guesswork, I’m going to say that I should compare myself to the over 40 age group, or if I was being really brash, the category simply designated “men”.

In the case of the over 40 group, I may be just barely squeaking into the advanced category for the deadlift, and in the case of all men, I’m definitely only intermediate.

My squats need work, as does my bench. (I actually mostly use a chest press machine.)

I haven’t included all of Dr. Kilgore’s charts, because they’re his, so I encourage you to go to his site and take a look at all of them and see where you stand. His charts include standards for women as well.

While these strength standards aren’t perfect, there’s probably no perfect way to make the comparison. The population is too heterogeneous, the number who lift weights is relatively small and changing, finer-tuned age categories may be needed. But they’re probably about the best anyone can do, so kudos to Dr. Kilgore for them. They take much of the guesswork out of knowing where you stand in terms of strength.

Barbells can be intimidating to many people

One last editorial note. One of the main reasons I wrote my book Muscle Up was to show that strength training is a uniquely healthful exercise that offers better protection against aging, obesity, and disease than does any aerobic form of exercise. For that reason, I advocate that everyone should train for strength – that includes anyone from teenage boys to little old ladies, and everyone in between.

As a consequence, I think that there may be too much emphasis on barbell training. To be sure, it’s a great way to train and I use it extensively myself. But many people are intimidated by barbells, and won’t go near them. If you tell people that the only “real” way to train for strength is to use Olympic-style barbells, then you’ve already lost a lot of people who stand to benefit greatly from strength training. In fact, you’ve lost the people who could use it the most.

In my view, it’s better to show people the benefits of strength training first. Let them use the Nautilus and other machines. Show them the compound lifts that they need to be doing. When the student is ready, he’ll find the barbell.

PS: I wrote a whole lot more on strength training in my book, Muscle Up: How Strength Training Beats Obesity, Cancer, and Heart Disease, and Why Everyone Should Do It. (On Amazon.)

PPS: Check out my Supplements Buying Guide for Men